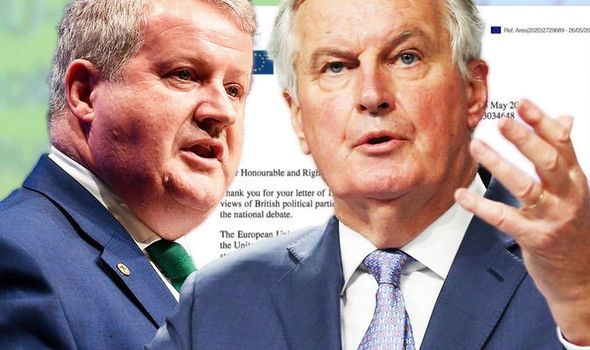 In the letter, the Head of European Task Force, Mr Barnier, thanks SNP’s Westminster leader Ian Blackford, and leaders of opposition parties for their letter.

He says: “Dear Honourable and Right Honourable Members of Parliament. Thank you for your letter of 15 May 2020.

“I remain keen on and interested in hearing the views of the British political parties and stakeholders in order to appreciate all dimensions of the national debate.

“The European Union remains determined to build a new and ambitious partnership with the United Kingdom in the short time that is available, given your Government’s repeated statements that it will not agree to an extension of the transition period.

“I take note on your views of a possible extension to the transition period.

“Such an extension of up to one or two years can be agreed jointly by the two parties.

“The European Union has always said that we remain open on this matter.”

But, Mr Barnier notes the decision must be taken “by the Joint Committee before 1 July, and must be accompanied by an agreement on a financial contribution by the UK”.

He adds: “Regardless of the extension issue, please rest assured that the EU side will continue to do its utmost to reach an ambition and balance partnership agreement with the UK”.