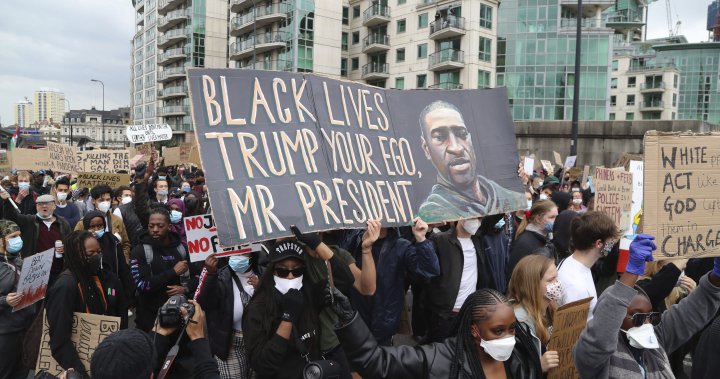 As the tsunami of demonstrations and calls to action to end systemic racism continue around the world following the tragic death of George Floyd, never before have the voices of today’s sports stars been more amplified than at the present time.

Floyd’s death while in police custody in Minneapolis on May 25 has prompted a renewed, and deafening, outcry to end police brutality and racial inequality, and athletes are among those who are leading the charge.

NBA icon LeBron James is one of the athletes who has been vocal about a need for action. So, too, has Toronto Raptors star Kyle Lowry.

Players with German soccer club Bayern Munich wore Black Lives Matter armbands in their victory on Saturday, and several jockeys knelt in solidarity with protesters before horse racing returned this weekend at Woodbine Racetrack in Toronto.

A day after he apologized for criticizing NFL players for kneeling during the U.S. national anthem, New Orleans Saints quarterback Drew Brees was chastised on Twitter by President Donald Trump for walking back his comments, saying Brees “should not have taken back his original stance of honouring our magnificent American Flag.”

Brees fired back, saying, “We can no longer use the flag to turn people away or distract them from the real issues that face our black communities.”

To @realdonaldtrump Through my ongoing conversations with friends, teammates, and leaders in the black community, I realize this is not an issue about the American flag. It has never been. We can no longer use the flag to turn people away or distract them from the real issues that face our black communities. We did this back in 2017, and regretfully I brought it back with my comments this week. We must stop talking about the flag and shift our attention to the real issues of systemic racial injustice, economic oppression, police brutality, and judicial & prison reform. We are at a critical juncture in our nation’s history! If not now, then when? We as a white community need to listen and learn from the pain and suffering of our black communities. We must acknowledge the problems, identify the solutions, and then put this into action. The black community cannot do it alone. This will require all of us.

The National Football League, thanks in large part to an employee in the league’s social media department, issued its strongest statement yet as commissioner Roger Goodell tweeted a video in which he stated, “We, the NFL, condemn racism and the systemic oppression of Black people,” and also admitted that the league was “wrong for not listening to NFL players earlier” and that it believes in Black Lives Matter.

Disappointed with the NFL’s initial statement that was issued five days after Floyd’s death, the social media staffer asked Saints receiver Michael Thomas if he wanted to create a video that would pressure the league to strengthen its message.

Thomas, and several other high-profile players such as Patrick Mahomes, Odell Beckham Jr., Saquon Barkley and Ezekiel Elliott, jumped on board and the video went viral.

NHL players have also thrown their support behind Black Lives Matter, including San Jose’s Evander Kane and New Jersey’s P.K. Subban — both of whom are Black — Toronto’s Auston Matthews, who is Latino-American, and many white players, such as Sidney Crosby, Connor McDavid, Alexander Ovechkin, Blake Wheeler and Jonathan Toews.

The COVID-19 pandemic has caused great loss and despair around the globe, but with the sports world on pause, it has provided us with a prolonged moment in which we can have this long-overdue conversation about ending systemic racism.

But as we have seen many times in the past, words are just one part of the solution — meaningful action is also needed.