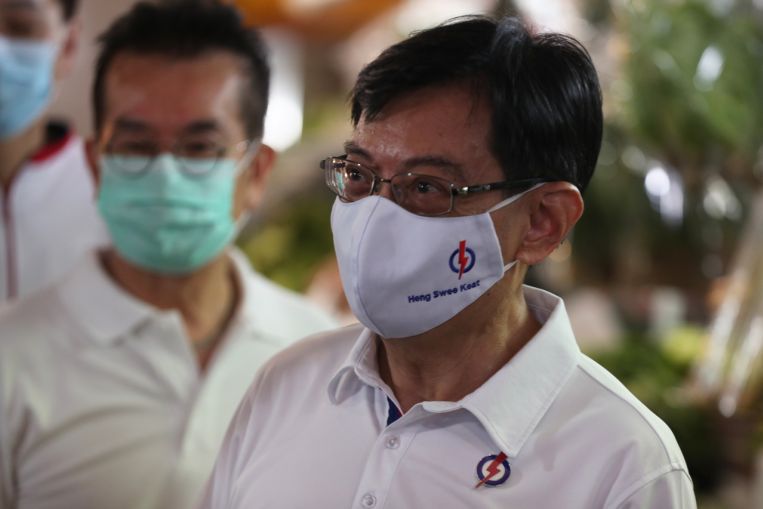 At a time when Singapore needs its strongest possible leadership, the Workers’ Party (WP) is using the prospect of an opposition wipe-out to sway voters and win more seats in Parliament, said Deputy Prime Minister Heng Swee Keat yesterday.

This could weaken the Government that needs a strong mandate to face the Covid-19 crisis, he said.

In a video message, Mr Heng called on voters to think carefully about WP chief Pritam Singh’s statement that the ruling People’s Action Party (PAP) would still have a “strong mandate” even if the opposition won one-third of the seats in Parliament at the general election.

“What would Singaporeans think, if they wake up next Saturday, to find that the PAP has lost four GRCs and two SMCs? What would investors and other countries think?” he asked, referencing the number of constituencies the WP is contesting.

“Do you seriously believe they would say – Good. The PAP has won a strong mandate again? Or would they see a government severely weakened, a people divided, and a nation whose confidence has been shaken?”

Singapore needs the strongest leadership it can muster, Mr Heng said, to face the most severe crisis facing the country since independence, and emerge stronger.

Mr Singh had earlier said the PAP would have an “incredibly strong mandate”, even with one-third of the seats in opposition hands. More importantly, the ruling party can still pass Bills, but not make constitutional changes.

It is a point echoed by other opposition parties, including the Progress Singapore Party, which has called on voters to deny the PAP a “super majority” by electing opposition candidates to at least one-third of the 93 seats up for grabs on July 10.

In his message, Mr Heng, the PAP’s first assistant secretary-general, urged Singaporeans to consider their vote carefully, as they will be choosing the country’s next government in the upcoming polls.

“Not just who is your local MP, who is going to speak up in Parliament, or look after your town council,” he said.

“You are choosing the team who will work with you to steer Singapore through the worst economic crisis in decades.”

This team, he added, will conduct foreign relations and command the Singapore Armed Forces. It will invest in Singapore’s long-term future, and take care of citizens’ housing, education, healthcare and infrastructure needs.

Mr Heng also took aim at the WP’s opposition to the Non-Constituency MP (NCMP) scheme, which allocates seats in Parliament to losing opposition candidates with the highest vote shares.

He asked voters to consider the WP’s motives for doing so, and called on the party to make clear if it would accept the seats if offered to its candidates.

Asked to respond to Mr Heng’s remarks, Mr Singh said at a WP press conference last night that the party’s stand on the NCMP issue was clear. “It’s in the public domain. And Mr Heng just needs to look at that,” he said.

In a statement last week, he had said decisions about NCMP seats would have to wait until after Polling Day.

In his video message, Mr Heng said that by keeping mum on whether it would take up NCMP seats, the WP is “playing games with voters”.

“They should not be made to think that the Workers’ Party will refuse NCMP seats, the opposition risks extinction, and so vote for them,” he added. “Then after the elections, the WP takes up NCMP seats that they are offered. And in this way, they can have their cake and eat it.”