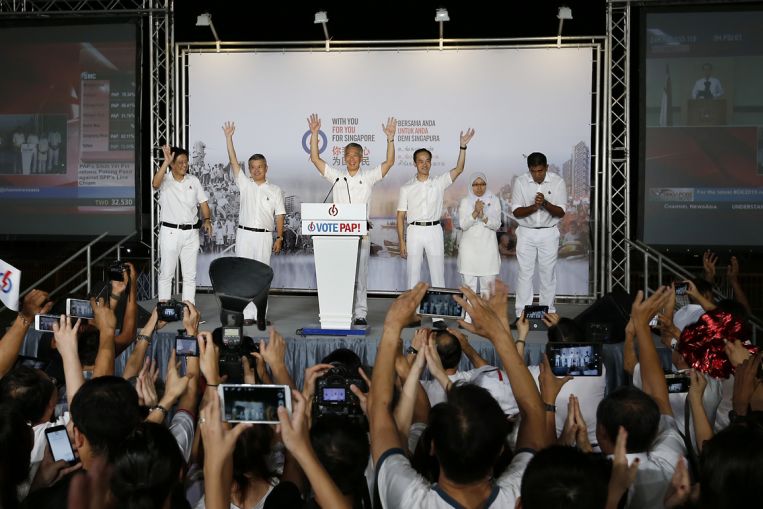 SINGAPORE – For the first time since independence, all constituencies in Singapore were contested in the 2015 General Election. In all, 2,304,331 votes were cast on Friday (Sept 11). Here are some highlights of the poll results.

Not including new single-seat wards, the PAP had the biggest vote swing in an SMC for Potong Pasir. In the 2011 General Election, the party got 50.36 per cent of the votes. But this year, it garnered 66.41 per cent of valid votes, representing a 16.05 percentage point swing.

The Workers’ Party (WP) successfully defended its Hougang single seat with 57.69 per cent of valid votes, the best result for the opposition in an SMC. The PAP garnered 42.31 per cent of the votes in the ward.

For GRCs, WP had the best result among opposition parties, with 50.95 per cent of the valid votes for Aljunied GRC. The PAP got 49.05 per cent of the votes. This was also the narrowest win in the General Election, with a difference of just 1.9 percentage points or 2,612 votes.

With 0.6 per cent of valid votes (150 votes) for Bukit Batok SMC, independent candidate Samir Salim Neji had the worst result for the General Election.

The PAP had the biggest increase in vote share among political parties, excluding new ones, for the 2015 General Election. It got a 9.72 percentage point swing compared to the 2011 polls.

Excluding new parties, the Singapore People’s Party had the biggest drop in its vote share for the 2015 election compared with the 2011 polls, with a 14.34 percentage point fall.

Hougang SMC had the least proportion of rejected votes – 1 per cent of votes cast, or 236 votes.