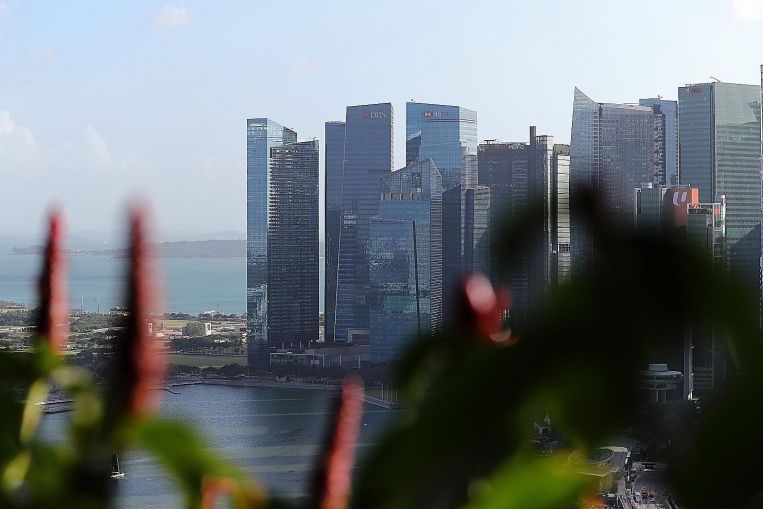 The financial services sector grew by 5 per cent in the first six months of this year – a silver lining amid gloomy economic predictions due to the Covid-19 pandemic.

The growth outpaced the same period last year, according to estimates by the Monetary Authority of Singapore (MAS).

While MAS expects growth in the sector to slow between June and December due to weaker credit demand and lower interest rate margins, the sector is also unlikely to contract.

The central bank’s managing director Ravi Menon made the prediction yesterday, at the release of MAS’ annual report.

He also noted that employment in the financial services and fintech sectors has remained firm.

Mr Menon said: “To date, we have not seen an increase in retrenchments in the financial services or fintech sectors.

“It is encouraging that some major financial institutions have committed not to shed any workers due to the Covid-19 crisis.”

However, Mr Menon warned that “there could potentially be some net job loss (going into the second half of the year), but this is not likely to be large”.

MAS expects the financial services sector to still be a net creator of jobs this year, though not to the extent seen in previous years, Mr Menon added.

He pointed out that there was a net increase of about 4,900 jobs in the financial services and fintech sectors last year, including fintech jobs in the overall economy but excluding jobs in holding companies.

The employment increase of 6,400 for the financial and insurance sectors in 2019 – published by MOM – includes holding companies.

The Monetary Authority of Singapore (MAS) recorded a net profit of $10.6 billion in the financial year that ended March 31, after a $2.2 billion contribution to the Government’s consolidated fund.

This was down from last year’s net profit of $19.2 billion, after a $3.9 billion contribution to the consolidated fund.

The authority’s total expenditure increased to $4.4 billion, mostly due to higher interest expenses from its domestic money market operations during the latest financial year, the MAS said in its annual report that was released yesterday.

The central bank said its total income of $17.2 billion came mainly from positive currency translation effects from the strengthening of the greenback, euro and Japanese yen against the Singdollar.

Investment income was lower compared to the previous financial year due to a sharp decline in the global markets in the final quarter.

The authority’s total capital and reserves increased to $44.9 billion as at March 31.

To date, we have not seen an increase in retrenchments in the financial services or fintech sectors. It is encouraging that some major financial institutions have committed not to shed any workers due to the Covid-19 crisis.

Mr Menon said: “Net jobs grew by 2,200 in the first quarter as banks continued to employ for roles such as business development, financial analysis and software development.”

“If the financial sector stays above zero per cent growth in the second half of this year, it will achieve the Industry Transformation Map target of 4.3 per cent annual growth in value-added over 2016 to 2020,” Mr Menon said, referring to the $4.5 billion programme under which road maps have been developed to encourage technological innovation among companies.

“Unless there are large-scale job losses in the second half, the financial services and fintech sectors will comfortably meet the ITM target of 4,000 jobs per annum,” he added.

According to a Manpower Group report last month, the hiring outlook for next quarter among Singapore employers is the weakest since 2009.

Of the 266 firms polled during the circuit breaker period, 38 per cent expect headcount to fall in the three months to Sept 30 compared with this quarter.