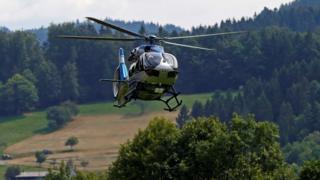 German police are into a fifth day searching dense forest for a gunman nicknamed “Rambo”, as his mother urges them to back off.

An elite unit, helicopters, thermal detectors and sniffer dogs are all deployed in the Black Forest area.

The homeless man fled into the forest near Oppenau, in south-west Germany, on Sunday after threatening four police officers and taking their pistols.

He is reported to have his own pistol too, plus a knife and bow and arrows.

A police wanted notice names him as Yves Rausch, 31, and the photo shows a bald man with a goatee beard and glasses. It warns the public not to approach him. He has spent time in jail previously for firearms offences.

The gunman’s mother told the Baden online website she had not been in contact with him since he went on the run. “They should withdraw all their forces. After one or two days he’ll come out of the forest by himself,” she said.

What is known about ‘Rambo’?

Police say he has lived in the Oppenau area a long time and he is believed to know the forest well.

His mother says he was evicted from his rented flat last year. It is unclear if it is the same one which Germany’s Bild daily says he had rented above a local inn last year, where he had set up a shooting range in his attic.

He had gone to stay at an aunt’s home before finally making a home for himself in the forest, his mother added. She described him as a “woodsman”, saying “he wanted to escape into nature, to be free”.

Police found him on Sunday in a hut on the edge of the forest, and said he had first appeared co-operative before suddenly pulling out a pistol and disarming the four officers. He was wearing camouflage gear.

According to his mother, he grew his own vegetables, used the hut as his home, and carved wooden gnomes which he hoped to sell.

Media reports have nicknamed him “Rambo” after the fictional, violent Vietnam war veteran who goes on the run from US police.

His mother said she had had a coffee with him at a local market on 8 July and he had appeared “perfectly normal”. But she said she saw him rarely, he was a loner and his father had died in 2018.

A state prosecutor involved in the case, Herwig Schäfer, said the fugitive had “a passion for guns”.

How is the manhunt going?

Police are examining an anonymous so-called “manifesto” left in a local bar, which may have been written by Yves Rausch. It is titled “The Call of the Wild” and argues that people who live close to nature are superior to modern, urban society.

About 200 police are involved in the arduous search and police say it is difficult terrain – there are few tracks in the forest, it is very hilly and they have found no trace of Yves Rausch so far. They have checked some derelict buildings and old ruined bunkers as possible hideouts.

A newspaper in the region, Badische Zeitung, quotes police as saying the area cannot be cordoned off and each officer is carrying a backpack of up to 30kg (66 pounds).

The fugitive could survive on wild plants, insects, spring water and by raiding local vegetable plots at night, the paper reports.