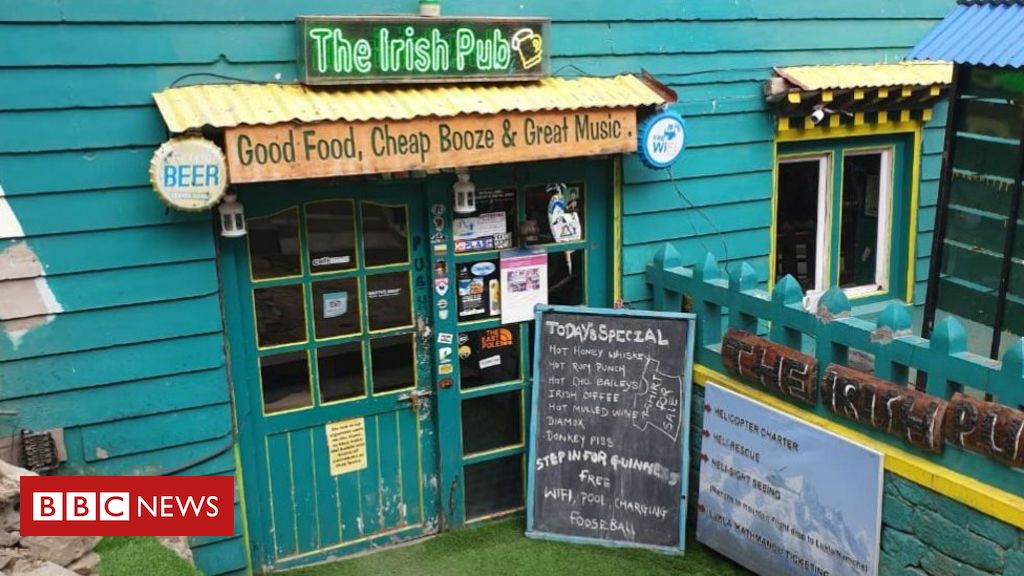 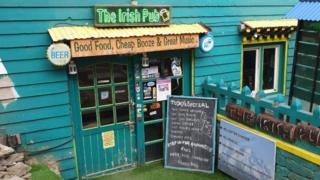 It has been closed since April, you can’t reach it by car, and the nearest airport is a two-day hike away – but the world’s remotest Irish bar is optimistic business will pick up soon.

It has been shut since 10 April, after the pandemic forced Nepal’s government to close the mountains to climbers.

Yet owner Dawa Sherpa, inisists that his bar will thrive beyond coronavirus.

The government recently announced it would issue hiking permits for the Himalayas’ autumn season, which begins in September. International flights – which were suspended in March – are due to resume in August.

And a new road, which could open next year, should make it easier to bring in beer, food, and even pool tables. Until now, it all had to be flown to “the world’s scariest airport” – and then carried for two days along mountain paths.

Dawa, 35, grew up in the “small, colourful, market town” of Namche Bazar, where his parents worked in agriculture and livestock.

After studying at Khumjung – the “school in the clouds” built by Sir Edmund Hillary’s Himalayan Trust in 1961 – he moved to the capital Kathmandu to study business management. Upon returning home, he briefly worked as a trekking guide, before his older brother, who ran a bakery in Namche, spotted a gap in the market.

The town was beginning to change – an increase in tourism had a “dramatic effect”, says Dawa – but it only had one pub. His brother, Phurba Tenzing, used to visit an Irish bar in Kathmandu, owned by Irish people. It gave the brothers an idea – could they open the highest Irish bar in the world? They Googled it, and discovered Paddy’s bar in Cusco, Peru.

“We worked out the elevation,” says Dawa. “They were 50 metres below us.” So, in 2011, they proudly opened The Irish Pub – the highest, and surely remotest, Irish bar in the world.

It is not easy opening a pub in a town with no roads. Supplies are flown in, off season, from Kathmandu to Lukla – a small airport with a short, steep runway.

From there, porters carry the goods to Namche. The pub’s pool table was brought in this way. “And ours is an old, classic Indian table, with huge marble slates,” says Dawa.

“Three or four slates, each one weighs maybe 120kg. We can’t hire mules or yaks because the paths are too fragile. It’s all carried by porters – humans – with great carefulness.”

They even import Guinness, expensively, via Singapore.

The bar had a slow start.

“At the beginning, it wasn’t that happening,” admits Dawa. “But we tried really hard to improve the service, ambience, interior. Gradually, we were getting there.”

Then, in April 2015, a major earthquake hit Nepal, killing almost 9,000 people and ending the climbing season. A landslide on Everest killed 21 people alone.

“We had to completely shut the bar down,” says Dawa. “We reopened in autumn, but that wasn’t good either.”

After the earthquake, an economic blockade – which began in September 2015 and affected the whole country – increased the price of goods by “four, five, even six times”. Yet despite the earthquake, and the blockade, the remotest Irish bar in the world survived.

“We recovered slowly,” says Dawa. “It took us three or four years to get there, but The Irish Pub became the most happening pub in Namche.”

On an average day, customers – usually Australian, American, or European – might include “people who just summited Everest, or people who’ve been to base camp for the first time”.

In 2014, Dawa opened a second pub in the lakeside town of Pokhara, and the Namche bar is now run by Chris, his manager. So, as they prepared for the 2020 spring season, things were looking good. And then, in March, came another calamity.

Nepal has recorded just 60 Covid-19 deaths, and 21,000 confirmed cases. But infections are rising again – and the impact has already been huge.

The country was locked down from March until July; remittances from Nepalis overseas slumped; imports from China fell; and tourism dried up. In the mountains, more than 10,000 guides, sherpas, and other workers lost their jobs. One trade group estimated one million people in the “mountain belt” would suffer.

But while the Irish Pub in Namche is down, it is not out.

Dawa is cautiously optimistic about tourism resuming, and is prepared to reopen for the autumn season in September, if there is demand. Meanwhile, the new road from Kathmandu could have an even bigger impact.

Dawa hopes the highway, which is already partly open, will reach Lukla in six to eight months, although engineers tell the BBC it could take two years.

Either way, the road, when it opens, will be a boon to the businesses of Namche Bazar.

“Once we get the road, Nepalese and Indian tourists will be enough for us to survive,” says Dawa.

“You know, 80 to 90% of Nepalese people haven’t seen Everest themselves, because of the lack of transportation. We have around 55,000 tourists a year in Namche, if things are really good. I think we will get more than 55,000 [extra] if we get a road.”

And, as well as extra customers, the new road will mean the beer – and the pool tables – won’t need to be flown in. “The prices will drop by 50%,” says Dawa.

Some things, however, won’t change.

The road will only reach Lukla – meaning customers will still need to hike for two days to reach the highest, and remotest, Irish bar in the world.