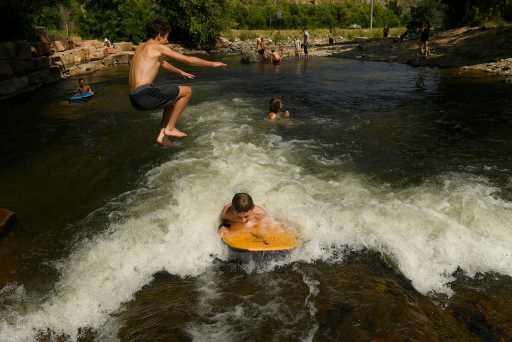 The sizzling summer heat continues in Denver as the temperature hit 100 degrees on Tuesday, the first triple-digit temp in the city this year.

Tuesday’s new record bests a 98-degree record set in 2013. It’s hasn’t been 100 degrees in Denver since Sept. 2 of last year, said Frank Cooper, a meteorologist and spokesman with the National Weather Service in Boulder.

On Monday, Denver also set a new record high for Aug. 17 when the temperature hit 98 degrees, breaking a 97-degree mark from 2013.

This season, Denver has had 58 days of above 90-degree temperatures, climbing into fifth place all-time for the city. By Saturday, Denver’s 90-plus readings should land in second place — if the hot weather forecast continues as expected — at 62 days and counting. The all-time record for the city is 72 days of above 90-degree heat, set in 2012, according to the weather service.

“It’s been unusually hot,” said Frank Cooper, a meteorologist with the weather service. “We didn’t see much of a monsoon this year and that’s the main reason why it’s been so hot and dry.”