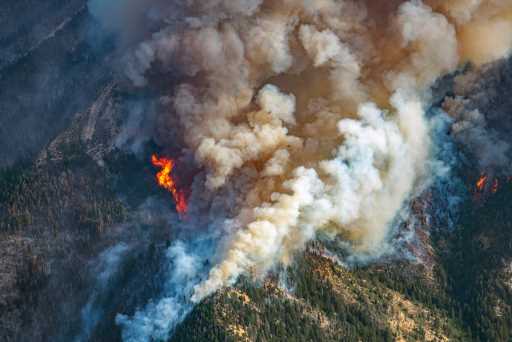 Colorado’s wildfires continued to burn from the Western Slope to the Continental Divide as fire officials warn that more hot and dry weather over the weekend could push further fire growth.

The Front Range is already seeing smoke and lower air quality from the four large fires, and meteorologists say more is on the way from California’s fires.

Thursday brought gusty winds and lightning — but precious little rain, as firefighters worked to establish a containment line along Colorado 139 near Douglas Pass on the fire’s west side.

Thunderstorms on Thursday brought rain to the east side of the fire near Bair Ranch, slowing the fire’s growth, officials said. Firefighters spent Thursday building direct and indirect fire lines and strengthened existing containment lines around the fire.

Crews continued structure protection in Bair Ranch, which has been a focus for several days.

Some fire resources had to be diverted to the Red Canyon fire nearby, which flared up due to hot and dry conditions, officials said.

Friday brings the return of hot and dry whether, which will increase fire activity. Officials are watching the west side of the fire, which remains hot and dry, while the east side could also see growth as vegetation dries out.

Interstate 70 between Gypsum and Glenwood Springs remains closed, as it has been for more than a week. The Colorado Department of Transportation wants to reopen the highway in a matter of days.

No structures have been damaged and no firefighters have been injured in the fire burning across Larimer County.

The fire has already burned to timberline in the Rawah Wilderness, and crews will monitor to make sure the fire doesn’t continue spreading into high alpine vegetation, officials said.

The region will see sunny skies Friday, with temperatures in the upper 70s to lower 80s and winds up to 20 miles per hour in the afternoon.

Favorable weather conditions Thursday allowed crews to work on containment lines to the west and southeast areas of the fire, officials said. The growth mainly came on southeast and south ends of the fire, with the majority of smoke coming from the fire’s interior.

The fire did not grow toward Fraser and Winter Park, which are 7 miles northeast of the fire at its nearest point. The Continental Divide stands between the fire and the towns, and its rocky alpine ridges and peaks help contain the fire west of the Fraser Valley, officials said.

Crews on Friday plan to focus on structure protection in the Fraser Experimental Forest and Henderson Mill area, while officials warned that the weather — with hotter temperatures and low relative humidity — will resume and continue through the weekend.

Road, trails and campgrounds on U.S. Forest Service land remain closed on a wide swath of the nearby area. No evacuations have been ordered for the Fraser Valley.