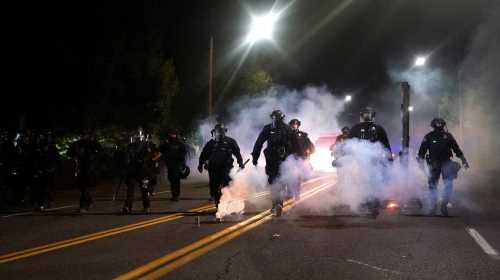 City and state officials on Sunday decried the actions of about 75 people who started fires, broke windows, injured one police officer and damaged property Saturday night during an “Abolish the Police” protest at the Denver Police Department’s headquarters.

The group members were not protesters but rioters and anarchists, city officials said at a Sunday news conference, vowing to bring down the full force of the law against the demonstrators and to stop any similar future actions.

In a tweet, Gov. Jared Polis called the demonstrators’ actions — and in particular windows broken at a Quiznos restaurant during the demonstration — “criminal terrorism.”

Pazen said additional charges are expected. One officer suffered third-degree burns and a concussion during the clash, but is expected to make a full recovery, Pazen said.

Of those arrested, seven live in Denver, two in Boulder County and police do not know the addresses of the remaining people.

Police used less-lethal weapons on the group Saturday night and some demonstrators threw fireworks at police officers, according to Denver7 reporters at the scene. The protesters told Denver7 that they had a variety of motivations for taking to the streets, including defunding the police, ending homeless sweeps, stopping racism and seeking justice for Elijah McClain, who died about a year ago after he was violently stopped by Aurora police.

Hancock said the city will seek to force those who caused property damage to pay for repairs, whether through the criminal cases or through civil action.

The city has not yet linked Saturday night’s demonstration to any one group or organization, Hancock said, but he also suggested the gathering in Denver is part of a larger effort across the country.

“We know there is a coordinated effort to inflict these kind of riotous activities in cities,” he said. “We saw some of it last night in Chicago and other cities. Other cities are picking up intel that they may be next.”

He said mayors across the country are sharing information and suggested that demonstrators could face federal charges.