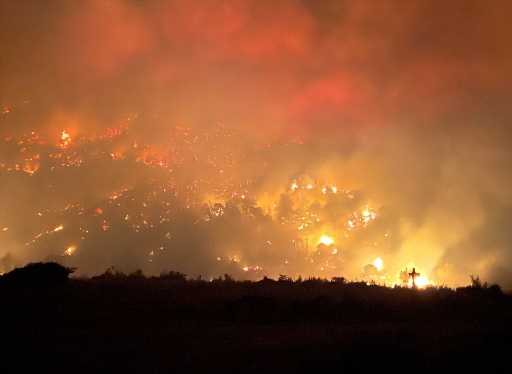 Four major wildfires continue to burn across Colorado, but firefighters were helped Sunday by cooler temperatures and some rain.

Passing storms could bring gusty winds to the fires Monday, but cooler temperatures are expected to continue and most fires are not likely to see major growth.

Fire crews increased containment on the Pine Gulch fire to 79% Sunday. The fire has burned 139,007 acres, or about 217 square miles, and is the largest wildfire in Colorado’s recorded history.

Firefighters expect to see little-to-no spread Monday, fire officials said, although there is a chance of gusty winds, which could increase fire activity.

Firefighters will work to reinforce containment lines on the northwest side of the fire and will focus on the uncontained perimeter on the western side, where the fire has been slowed by natural features and containment lines, but is still active.

Crews are preparing to re-open roads in the area for residents and hunters and expect to do so in the next few days.

Firefighters dealt with hour-long strong winds Sunday that threatened to push the fire over established fire lines and forced crews to pull back for their own safety, fire officials said in a daily update. The wind was caused by a passing storm, which brought gusts of about 40 mph.

Despite the gusts, the fire lines held, and crews went back to the perimeter after about an hour.

Firefighters expect to see similar weather Monday, with winds creating “near critical fire conditions,” according to the update.

Crews will remain focused on the uncontained northwest corner of the fire, continuing to build fire lines there, and will monitor for hotspots elsewhere.

Interstate 70 remains open in both directions, with some delays.

Dry and breezy conditions will likely up fire activity Monday, although there is a 60% chance of rain across the fire area Monday afternoon and into the evening.

Weekend rains dampened the Williams Fork fire, stymieing its growth and keeping the blaze to 12,097 acres, or about 19 square miles.

The fire is about 10% contained, fire officials said. Cooler temperatures and rain over the weekend gave firefighters a breather as they continued fire suppression, and officials don’t expect to see significant fire behavior over the next few days.

On Monday, fire crews will continue to work on building a fire line west of Fraser and south along St. Louis Creek Road, which will take several days to complete.