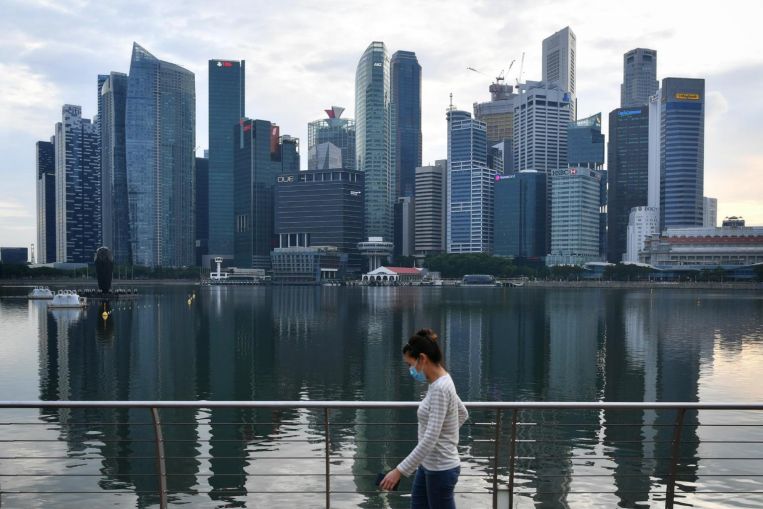 SINGAPORE – Private-sector economists have lowered their 2020 forecast for Singapore’s economy but they turned more bullish over the strength of a recovery next year and suggest the worst of the coronavirus-induced contraction came in the second quarter.

The economy may shrink by 6 per cent this year, according to a quarterly survey of 26 economists and analysts by the Monetary Authority of Singapore (MAS), slightly worse than the 5.8 per cent contraction predicted in the previous June survey.

However, the professional forecasters expect growth in gross domestic product (GDP) to recover to 5.5 per cent in 2021, up from the 4.8 per cent they had tipped earlier, MAS said in its survey report released on Monday (Sept 7).

The Ministry of Trade and Industry last month lowered its outlook for the fifth time this year, with the economy now forecast to shrink by 5 to 7 per cent. This would make this year’s recession Singapore’s worst since independence. So far, there is no official forecast for 2021.

For the third quarter of this year, the analysts expect the economy to contract by 7.6 per cent year on year, easing from the record 13.2 per cent plunge in the second quarter.

MTI is likely to issue advance estimates for the July-September period later this month.

A further deterioration in the coronavirus situation, due to further waves of outbreaks or delays in vaccine development, topped the list of downside risks to Singapore’s growth outlook identified in the survey.

Ninety per cent of the respondents cited the risk of a secondary outbreak and 75 per cent ranked it as the top downside risk.

An escalation in US-China tensions was identified by 60 per cent as a downside risk, compared to 55.6 per cent in the previous survey.

Respondents were also concerned about risks stemming from a slower-than-expected global economic recovery, with 25 per cent identifying it as a risk, up from 16.7 per cent in the earlier survey.

Meanwhile, the containment of the Covid-19 outbreak, due for instance to the successful global deployment of a vaccine, again emerged as the most frequently cited upside risk to Singapore’s growth outlook. Seventy-five per cent of the respondents listed it and 60 per cent ranked it as the top upside risk.

Respondents also identified stronger-than-expected manufacturing sector performance, led by electronics and pharmaceuticals production, as a key upside risk. This was identified by 40 per cent of respondents, compared to 55.6 per cent in the previous survey.

In addition, 30 per cent of respondents flagged easing US-China tensions as a potential upside risk to the outlook, up from 16.7 per cent in the previous survey.

Taking the mean probability distribution in the latest MAS survey, the most likely outcome for the Singapore economy is a contraction of 5.1 to 7 per cent this year, with a 62.2 per cent average probability assigned to this range.

In the June survey, the most likely outcome for 2020 had been projected at minus 6 to minus 4.1 per cent, with an average probability of 53.3 per cent.

For the labour market, the respondents expect the seasonally adjusted unemployment rate to ease slightly to 3.5 per cent at the end of 2020, from 3.6 per cent in the previous survey.

The CPI-All items inflation and MAS core inflation for the third quarter 2020 are expected to come in at minus 0.6 per cent and minus 0.4 per cent, respectively.