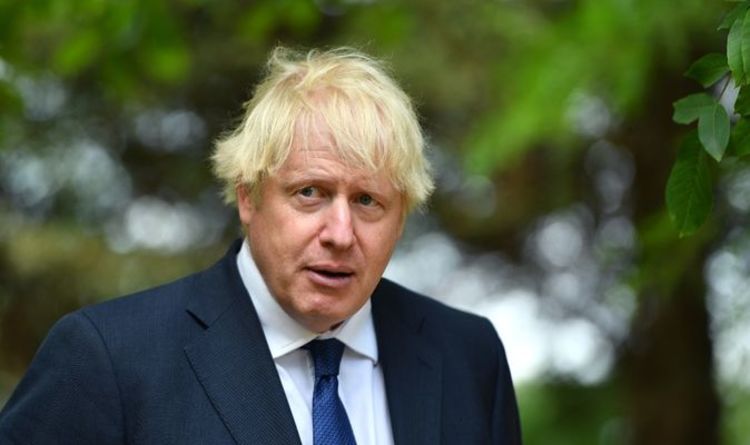 BBC Weather forecaster Chris Fawkes warned a weather front coming from the west will bring warm air and high amounts of humidity, making it hot and muggy for many on Tuesday. He said: “We’ve got low pressure for the north of the UK and high pressure in the south. And this front working eastwards.”

Pointing at Northern Ireland, northern Wales and western England on the map, he added: “This area is what we call a warm sector, bringing warm air through the UK, yes, but also increasing amounts of humidity.

“That’s going to thicken the cloud and bring some drizzle, some mist and fog patches around our coasts and hills.

“So it will be increasingly murky in the next few hours and a few spots of drizzle. Not great amounts but some dampness in the air across the west first thing.”

Temperatures will start off quite high at up to 16C for the south in the early hours of Tuesday.

They will reach up to 23C over the course of the day, but as the weather front will increase humidity in the air, it will feel a bit warmer. 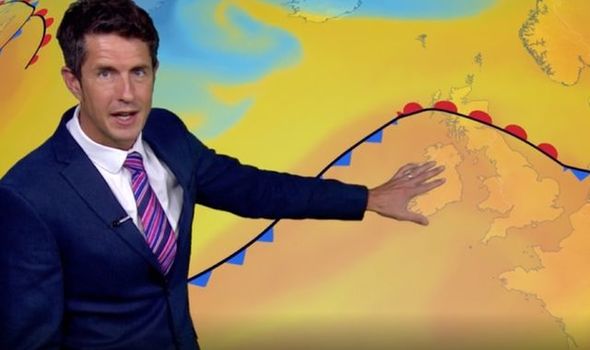 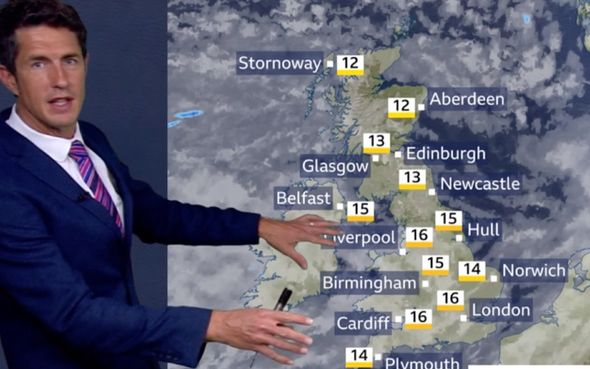 The Met Office is also forecasting some warmer weather and sunny spells in some parts of the UK.

Met Office meteorologist Mark Wilson told Express.co.uk there will be “quite a lot of cloud” around and some “patchy rain” on Tuesday across western areas of the country.

Later on in the day, in Scotland there is also expected to be some heavier and more persistent rainfall.

Elsewhere will be mainly dry on Tuesday with some brightness, especially towards the east of the UK.

It is also expected to be quite a warm day, as temperatures could reach as high as 24C in the south-east.

For Wednesday, Mr Wilson said much of the UK will see some sunnier skies after rain and cloud passes.

He said: “Through Tuesday night into Wednesday that cloud and rain will sink its way southwards, and it will take its time.

“So I think the rain [will be] clearing the far south of England on Wednesday afternoon.

“But behind it, it will turn much sunnier from the north, sunnier skies with a few showers across Scotland.

“[So] sunnier skies following on Wednesday but a little bit cooler as well.” 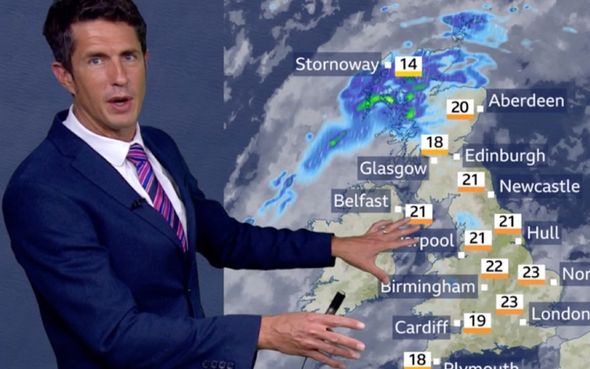 Thursday looks likely to be a dry day generally, with some sunshine and sunny spells.

Nights are expected to be cooler, but temperatures in the daytime will still be quite warm particularly in the south.

There is a bit more uncertainty in the forecast for later on in the week.

However in the south it is expected to be mainly dry towards the end of the week.