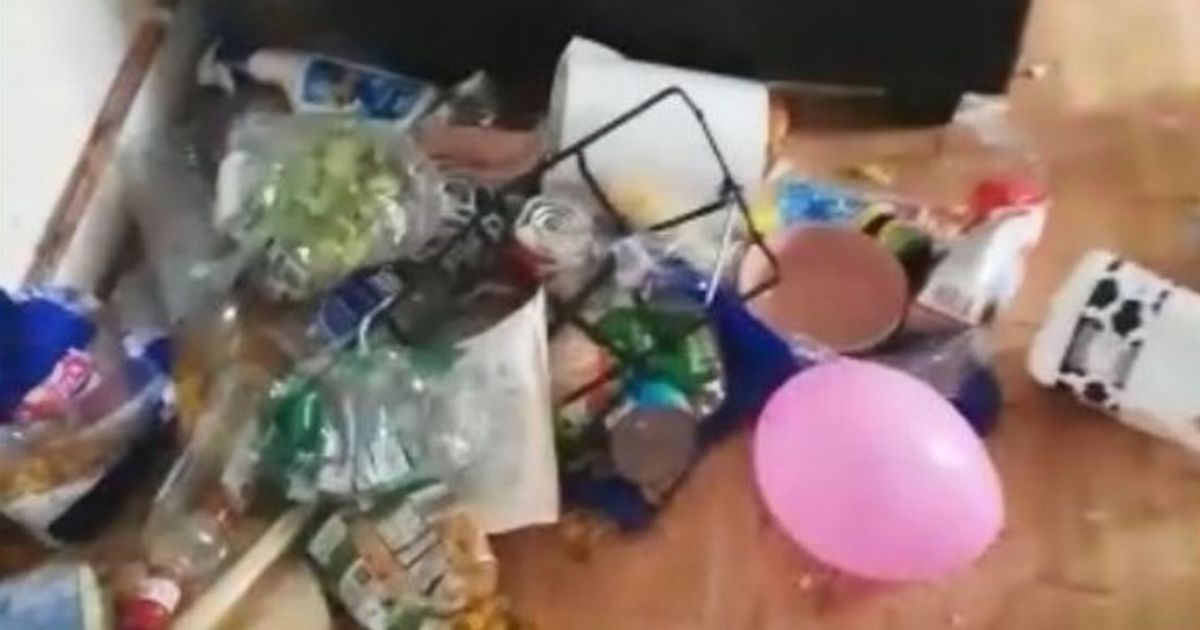 An 18-year-old leaving the care system says she felt "abandoned" by social services after being "left" in a vile home full of maggots, festering food, and even "blood".

Sarah, whose name has been changed to protect her identity, was horrified when she was shown around a filthy home with "blood everywhere" and took a video of the stomach-churning mess.

The teen was first taken into care as a young girl following the death of her mum when she was just four years old and her dad "not being able to cope", Kent Live reports.

After turning 18, Sarah was put up by a relative for a short while but they "kicked her out" onto the streets.

In response, social services offered her a room in their emergency accommodation in Belmont Road, Broadstairs, Kent, but due to the disgusting condition she turned it down.

Footage taken inside shows "blood" splatters around the kitchen, mouldy and maggot-infested food left in the living room, and piles of rubbish throughout the communal areas.

She was told she would have to present herself as homeless to Thanet District Council in the hope of being housed by them – but social services would declare her "intentionally homeless" for turning down the room they offered.

Sarah said: "They sent me to this place and said it was two other girls and it was a nice apartment, everyone wanted it so I had to get it quickly because someone else would take it.

"I arrived there and thought ‘oh my god, I’m not living in that'.

"It reminded me of my childhood. I used to live in squalor, I was always dirty, always wearing dirty clothes, and I helped my dad clean the house when social services were coming around. He couldn’t cope.

"The flat was horrible, there was blood everywhere, and the social worker just left me there.

"She wouldn’t do that to her own children."

Sarah wants to live in her own flat, but unfortunately, she does not have anyone who can act as a guarantor for her and so she has been turned down from the private flats.

Even though she works part-time at a supermarket while studying for college and receives universal credit, she does not earn enough to rent privately without a guarantor.

Over the last couple of weeks, she has been able to stay with a friend but they don't have enough space to put her up for much longer, leaving her at risk of homelessness.

Sarah said: "Children are going to be left vulnerable, and there could be other places that are worse than the flat I was sent to but they’re probably too scared to say something."

Kent County Council, who run child social services and transitional support for care leavers aged 18-25 across the county, claims the flat in question was in such a poor state because of an unauthorised party held by the other tenants.

A spokesman told Kent Live: "We take the safety and welfare of our children and care leavers extremely seriously and work hard to ensure that they are well accommodated and cared for.

"Unfortunately, prior to vacating a shared property some young people decided, against strict instructions, to hold a party resulting in communal areas of properties being left in a poor state which was the case at Belmont Road.

"This does not reflect the standard of home that the council would want for our care leavers and the property has since been inspected and cleaned.

"The rent guarantor scheme is offered to Kent young people who are care leavers, and we currently have 79 young people accessing the scheme.

"To gain access to the scheme, the council must complete an assessment and be confident that a young person can both financially manage the rent commitment and be ready to live independently.

"If the council is not confident, we will continue to support the young person towards making the transition into privately rented accommodation in the future.

"We would like to reassure Sarah* that she will not be homeless and we have been in regular contact to update her on the options available."