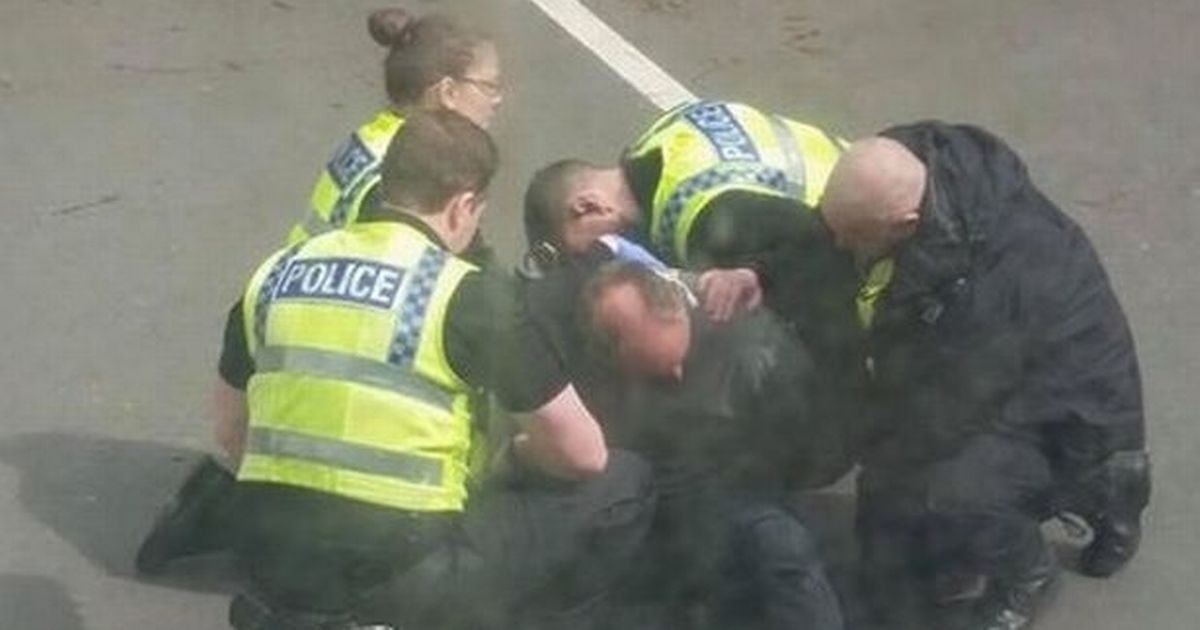 This is the moment a killer was cuffed by police when they wrestled him to the ground following the brutal murder of his wife.

Ian Hamer, a 54-year-old former BHS and House of Fraser store manager, was arrested after he strangled his wife, Joanne Hamer, to death – before going to his local pub to laugh and joke with his pals.

He was spotted by cops after he had been out drinking in Barton-upon-Humber, Lincolnshire – and was cornered and arrested in a car park.

It took four officers to tackle him to the ground and pin him down until back up arrived – at which point he was arrested and ushered into the back of a police van.

On Friday, September 18, Hamer was sentenced to life behind bars for the murder of his wife – and told he must serve a minimum of 22 years in prison before being considered for parole.

Hull Crown Court heard how he had subjected his wife to two years of domestic abuse – while also controlling her every move and isolating her from friends and family.

The court also heard that Hamer had called his wife’s terminally ill mother to tell her that his wife had a sore throat and would not be able to call her that day.

He delivered the message after the murder, with the judge calling it "sadistic".

Hamer then went out to laugh and joke with friends at a pub before embarking on a drink and drugs binge.

The killer – who is said to have suffered from drink problems and bouts of paranoia – is said to have told police when he was arrested for his wife’s murder: “I want to say it's manslaughter by diminished responsibility due to insanity."

During sentencing, a statement from Joanne's late mum, who died in August last year, was read out.

It said: "Jo was a beautiful, kind and loving lady and always saw the best in people.

“She stayed with Ian even though she was begged to leave him. I find it difficult to understand how someone can kill someone like Jo.”

Judge Kelson QC said in his sentencing of Hamer: "You were an overbearing, violent, domineering, aggressive husband and father.

"You were thought by your neighbour to be a man who didn’t like women.

“Your stalking behaviour didn’t arise from your love of Joanne. You told a psychiatrist you never stopped loving Joanne but I do not believe your behaviour came from love but a desire to control her and your love of money.

“You said you wanted to say it’s manslaughter based on diminished responsibility due to insanity. Well, Mr Hamer that was your last act of control and manipulation for many, many years.”

She encourages victims to step forward, saying: "You can call our non-emergency 101 line, or anonymously contact the independent charity Crimestoppers on 0800 555 111. In an emergency always dial 999."