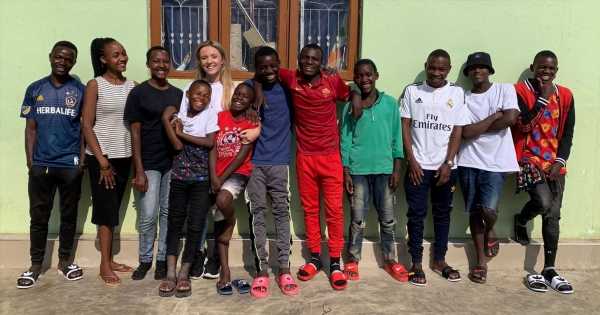 A young volunteer has adopted a small army of children after working at an orphanage in Africa and wanting to give kids a better chance at life.

Letty McMaster from Tunbridge Wells in Kent was just 18-years-old when she went on a month-long volunteer trip to an orphanage in Tanzania.

The big hearted volunteer – who is now 26-years-old – ended up working in the orphanage for three years and took in nine youngsters when the orphanage closed to save them from homelessness.

Over the past seven years, she has adopted a further five children, becoming legal guardian of all 14, and now lives with them all.

Letty says she always knew she wanted to help those in needs – but has surprised even herself after offering sanctuary and a home to the large number of youths.

She told the Daily Mail: “I'd always had in mind that I wanted to help street children so my family and friends weren't surprised but I never expected to end up doing all this.”

“I am the parental figure in the house – some of the little boys who never had a parent view me as their mum but most see me more as a big sister as I'm not that much older than some of them.

“I'm just like any mum raising teenagers – I made a commitment to them and I just feel so blessed to have two families!”

Speaking about her time working in the orphanage in Tanzania, Letty says she was horrified to find corrupt employees taking advantage of the children in their care.

She alleges that she found staff fed the children only once per day and were pocketing cash daunted from tourists for themselves.

She warns that many orphanages are regarded as “a money-making scheme and an exploitation of the children” – so she took action to make a real difference.

Letty founded Street Children Iringa as a UK registered charity and set up a home for herself and nine children in the Tanzanian town.

She has gone on to adopt the extra five children she found living on the streets – and says they have all excelled in school since having the stability of a caring home.

Letty herself lives in the home in Inga for nine months of the year and spends the rest of the time in the UK fundraising.

And despite only intending to be in Africa for one month of volunteering before beginning university and instead staying for three years, she has managed to graduate with a degree in Development Studies from the University of SOAS, London.

More information about Letty and her charity can be found at streetchildreniringa.org/our-story/