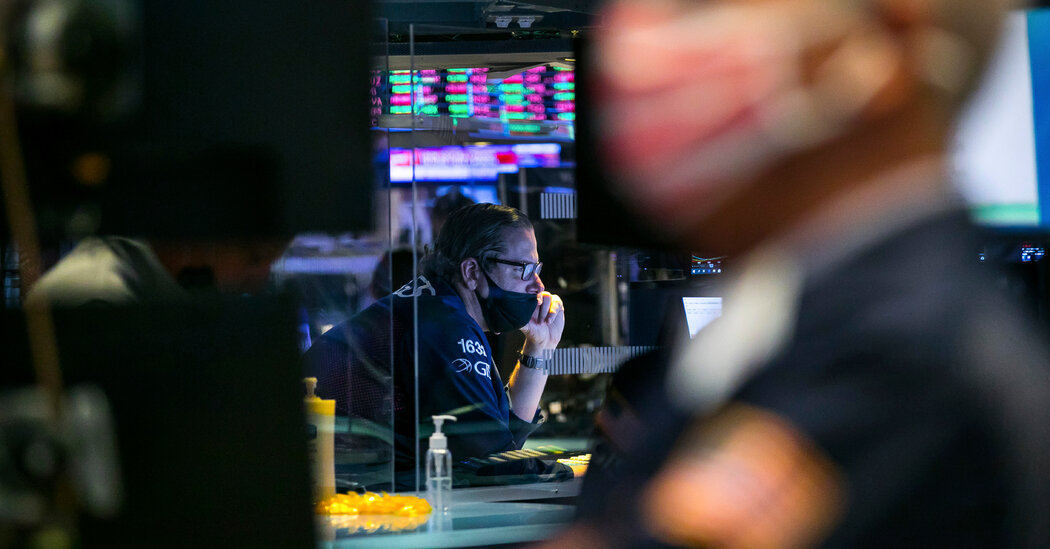 Echoes of the past are spooking investors.

On Nov. 17 and 18, DealBook is holding our first Online Summit. Join us as we welcome the most consequential newsmakers in business, policy and culture to explore the pivotal questions of the moment — and the future. Watch from anywhere in the world, free of charge. Register now. 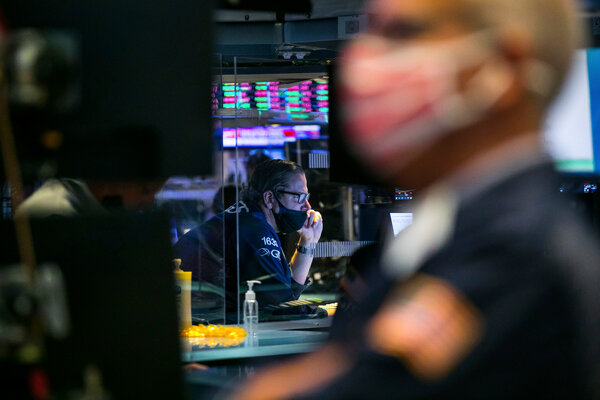 Stocks had their worst day since June — and third decline in a row — yesterday, with the S&P 500 ending 3.5 percent lower. The drop wiped out the index’s gain for the month, as it did for stocks in Europe, gold, oil and many other assets. Early trading suggests a modest rebound today, but nerves are clearly on edge.

Uncomfortable echoes of the past are spooking investors, particularly the prospect of renewed pandemic lockdowns. The U.S. reported a record 500,000 new coronavirus cases over the past week, and hospitalizations are up nearly 50 percent in the past month. New restrictions are being introduced across the country, including a nightly curfew in Newark, a stay-at-home order in El Paso and a ban on indoor dining in Chicago. They’re also being imposed across Europe, including a second nationwide lockdown in France. That has given investors “an unwelcome déjà vu feeling, and their automatic response is to hit the ‘sell’ button,” said Greg McBride, the chief financial analyst at Bankrate.

Heather Long of The Washington Post notes that the S&P 500 is back to where it was on July 31, when enhanced federal aid for the unemployed expired. That serves as a reminder of the lack of progress on a new stimulus package since then.

“You’ve had everybody pricing in best-case scenarios,” said William Delwiche, an investment strategist at Baird. “All of the sudden, those aren’t being realized.” The feeling this week is of an indiscriminate “lockdown meltdown,” wrote Bloomberg’s John Authers, given the breadth of the selling.

It’s not all bad news, with smaller stocks outperforming their larger counterparts in recent weeks. This, market watchers say, reflects a bet that these domestically focused stocks will benefit if there’s a “blue wave” election result and Democrats enact large spending programs. That puts a lot of faith in polling, five days from Election Day. Until then, according to Ben Laidler of Tower Hudson Research, markets will be “caught between double-dip recession fears and election-induced policy paralysis.”

The final pre-election economic report card is due. America’s third-quarter G.D.P., released at 8:30 a.m. Eastern, is likely to be a blockbuster: Analysts expect growth of about 30 percent on an annualized basis versus the previous quarter. Yet the bounce still wouldn’t be enough to recover the ground lost in the pandemic-induced collapse in the first half of the year.

It’s a big day for earnings. Several blue-chip companies have already opened their books, and it’s a mixed bag: Samsung reported a rise in profit but warned of a weaker outlook; Credit Suisse revealed a bigger-than-expected fall in earnings; Shell raised its dividend and recorded a surprisingly large profit; and Volkswagen missed expectations but maintained its full-year forecast.

Boeing plans another wave of job cuts. The plane maker said it would reduce head count by 11,000, including 7,000 layoffs, as it continues cutting costs amid sapped demand for its jets. Executives also said they didn’t expect the company to generate positive cash flow next year.

A San Francisco icon sells in the biggest U.S. commercial property deal of the pandemic. A group of investors said it would buy the TransAmerica Pyramid from the Dutch insurer Aegon for $650 million, after initially agreeing to buy it in February for about $700 million.

A bid for the newest James Bond movie is reportedly rejected. MGM turned down an offer from Apple for exclusive streaming rights to “No Time to Die” in the $350 million range, according to The Hollywood Reporter. This highlights studios’ pandemic dilemma: hold the biggest movies for theatrical release next year, or cash out by selling to a streaming service now.

Three tech C.E.O.s — Jack Dorsey of Twitter, Sundar Pichai of Google and Mark Zuckerberg of Facebook — submitted to a grilling before the Senate Commerce Committee yesterday, ostensibly to talk about the law that gives internet platforms legal protections from content that users post, known as Section 230. Yet the hearing focused on nearly everything but that topic.

Only two questions meaningfully addressed Section 230. Senator Deb Fischer, Republican of Nebraska, asked Mr. Zuckerberg what he would like to see altered in the law about content moderation. (He responded with a talking point about trust and transparency.) And late in the hearing, Senator Shelley Moore Capito, Republican of West Virginia, asked whether the executives would favor redefining a clause in the law. (They wouldn’t.)

What senators talked about instead: Republicans overwhelmingly asked about purported censorship of conservative viewpoints, while Democrats focused on the spread of misinformation and extremism online. Our colleague Shira Ovide’s assessment: “This is not the hallmark of a serious exercise in policymaking.”

A Breakdown of the Questions

Who got the most heat? Mr. Dorsey received nearly half of all questions — including a theatrical set of shouted queries from Senator Ted Cruz, Republican of Texas — followed by Mr. Zuckerberg. Mr. Pichai got away with just 22 of 129 questions from lawmakers.

What’s next? Mr. Zuckerberg and Mr. Pichai are back in the spotlight today, announcing their companies’ latest quarterly earnings. (Apple and Amazon are also reporting). Analysts expect sales and profits to be mostly up, reflecting tech giants’ continued dominance in the pandemic-stricken economy.

“It is very clear that Asia is much stronger than the rest of the world right now.”

— Thomas Gottstein, Credit Suisse’s C.E.O., after sales in the region grew to 20 percent of the bank’s total revenue

Tiffany sells at a discount

The American jeweler agreed to sell itself to LVMH for just under $16 billion, putting to an end months of legal wrangling over the luxury industry’s biggest-ever takeover.

The new price is about $400 million less than before. Tiffany and LVMH negotiated a compromise in recent weeks, with a small group of executives and advisers, DealBook hears. While Tiffany wanted the deal completed on the terms agreed almost a year ago, it appears happy to have the deal go forward at all — with protections in place to ensure no hiccups this time. (It’s expected to close in January, and the companies’ dueling lawsuits in Delaware will be settled.)

What the once-warring sides are now saying:

“The board concluded it was in the best interests of all of our stakeholders to achieve certainty of closing,” said Roger Farah, Tiffany’s chairman.

“We are as convinced as ever of the formidable potential of the Tiffany brand and believe that LVMH is the right home for Tiffany and its employees during this exciting next chapter,” said Bernard Arnault, LVMH’s chairman and C.E.O.

This week, DealBook is highlighting how corporate America is preparing for a momentous election. Today, partners at the law firm Baker McKenzie tell Ephrat Livni what’s on their minds as they work with anxious clients across the country.

The case for feelings

A boss’s job in 2020 is not what it was in 2016, or even last year. When the pandemic began, keeping spirits up became a primary preoccupation for Baker McKenzie’s North America chief, Colin Murray. “A high-stakes, polarizing election” amid coronavirus outbreaks only made wellness more of a focus, he says.

“It’s been a tough go for the country,” Mr. Murray says. “We want to encourage people to engage and channel energy in a positive way.” The firm is giving employees time off to participate in nonpartisan volunteer efforts, like election-related pro bono work or responding to calls on a voter hotline. And because of the heightened anxiety of the pandemic, a licensed therapist is available to the staff and holds “very well attended” virtual seminars, Mr. Murray adds.

At the same time, partners are trying to help clients deal with their own stresses. In the past, companies have simply encouraged employees to be civil if they discuss politics at the workplace, says Mike Brewer, a partner in San Francisco specializing in employment law. But with partisan tensions running increasingly high, conditions are now more conducive to conflict.

Online political talk can quickly get out of hand, unlike face-to-face office conversations in which social cues suggest when it’s time to calm down and get back to work. And words written in emails or text chats don’t fade away in the same way that verbal exchanges do.

Policy uncertainty around the election adds to the anxiety. Alexandra Minkovich, a partner in Washington, says she’s spending much of her time with clients assessing candidates’ diverging tax proposals. Denmon Sigler, a partner in Houston, is fielding “plenty of inquiries” from energy industry clients who wonder what might happen with environmental regulations.

Every week, unlike in the pre-pandemic times, Mr. Murray gathers staff from the U.S., Mexico and Canada, along with clients across their industry practices, to talk about common problems in this fraught time. He has adopted “resilience, renewal and recovery” as his mantra.

Marvell Technology is buying Inphi, a maker of computer chips for data storage, for $10 billion. (Reuters)

J.C. Penney formally struck a deal to sell its retail and operating assets to its two biggest landlords, the mall operators Simon and Brookfield. (Reuters)

Elite Model World, one of the biggest model management companies, is reportedly in talks to go public by merging with a SPAC. (Bloomberg)

A Joe Biden victory could lead to a split in the Democratic Party over trade policy. (NYT)

Best of the rest

The number of Black-owned businesses in the U.S. has climbed back to 1.1 million, recovering pre-pandemic levels. (Bloomberg)

Whatever happened to SkyMall? (Marker)

We’d like your feedback! Please email thoughts and suggestions to dealbook@nytimes.com.