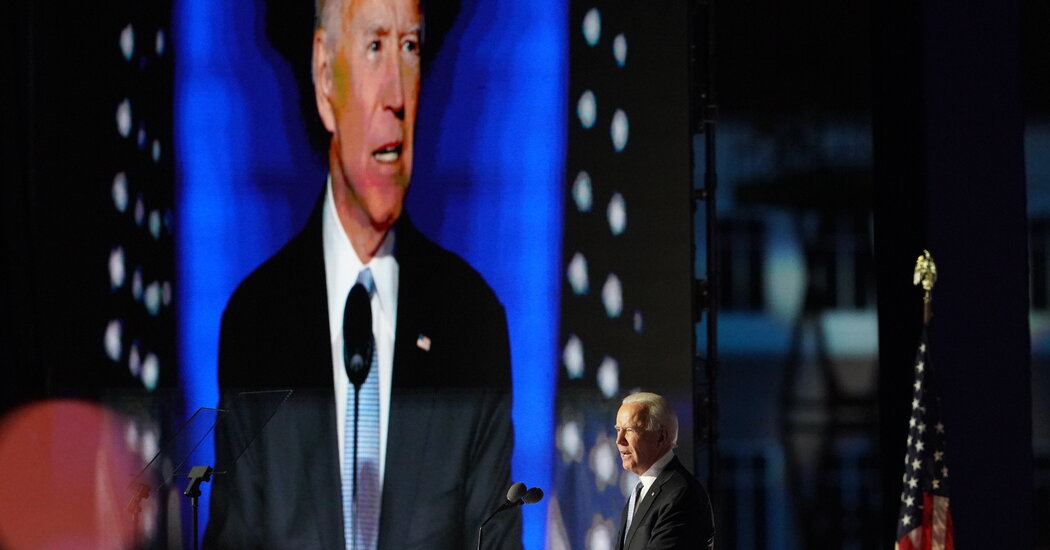 We’re covering Europe’s reception to the U.S. president-elect, a new peak of 10 million coronavirus cases in the U.S. and hard times for Paris’s bouquinistes. 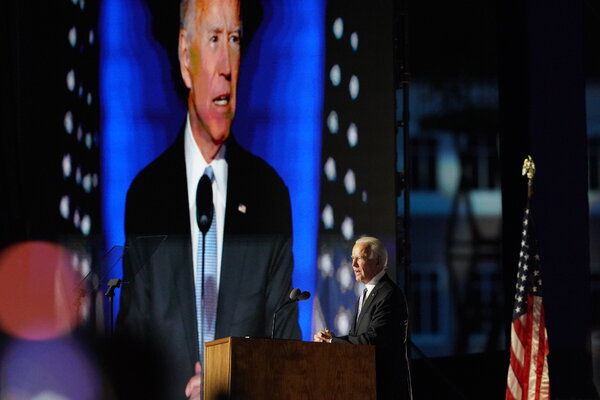 Political leaders across the Continent showered the president-elect with congratulations. Unlike President Trump, Joe Biden, who was elected the 46th president of the U.S. on Saturday, is well-disposed to his trans-Atlantic allies and is likely to restore civility to the relationship, as well as to rejoin the Paris climate accord and remain in the World Health Organization.

But there will still be wariness in Europe about what Mr. Biden may ask of the continent’s leaders, especially in the knowledge that he may be a one-term president and that the populist impulse that animated Trumpism has hardly gone away.

At home, the president-elect prepared a transition of power and was to announce today a Covid-19 task force as the coronavirus outbreak in the U.S. reached harrowing new levels. Mr. Trump has not conceded defeat. Here are our latest updates.

Biden speaks: “Let this grim era of demonization in America begin to end here and now,” Mr. Biden said to a drive-in audience in Wilmington, Del. “I pledge to be a president who seeks not to divide, but unify.” Read his full speech.

Making history: Senator Kamala Harris became the first woman — and woman of color — to be elected vice president. Ms. Harris, the daughter of an Indian mother and Jamaican father, has risen higher in the country’s leadership than any woman before her.

Silence from Russia: Unlike his Western European counterparts, President Vladimir Putin of Russia had not issued a statement on the president-elect by the end of Sunday, foreshadowing a tense four years to come.

Hometown boy: In Ballina, Ireland, a town of 10,000 people where Mr. Biden’s great-great-great-grandfather was born and raised, residents toasted their distant cousin — even as a lockdown kept bars closed.

10 million coronavirus cases in the U.S.

The United States reported its 10 millionth coronavirus case on Sunday, with the latest million added in just 10 days, out of nearly 50 million total cases worldwide.

As the country struggles with its most widespread wave of infection yet, experts point to an upcoming holiday season in which many people may gather in situations where the risk of virus transmission is high. The seven-day average of new cases now exceeds any other country’s, at 100,000 per day. Hospitalizations and deaths have also risen.

In Europe, the hospital crunch has grown still more dire. Adjusted for population, there is more than double the number of people hospitalized with Covid-19 compared to the U.S., threatening to overwhelm stretched facilities and exhausted medical workers.

By one count from the European Center for Disease Prevention and Control, total cases in Europe have reached over 11.8 million.

Queen Elizabeth II of England was seen wearing a face mask in public for the first time on Wednesday at a private ceremony during the prelude to Remembrance Sunday.

The mutation of the coronavirus in mink, which caused Denmark to order the killing of all farmed mink, has sharpened the worry among scientists that the pathogen could spread to other wild and domestic animals.

In Europe, tensions over fears of Islamist extremism

A month after a teacher in France was beheaded for showing caricatures of the Prophet Muhammad to his class, fears are growing in the Netherlands that the country may experience ripple effects of the attack.

An 18-year-old woman in Rotterdam was last week arrested on suspicion of making online threats against a teacher who had displayed in his classroom a cartoon supporting Charlie Hebdo, the French satirical newspaper that had originally published the Muhammad caricatures. The local news media reported that another teacher, in Den Bosch, was threatened after he showed students a cartoon depicting Muhammad during a class about free speech.

And in France, the particular characteristics of the three young men behind recent terrorist attacks — isolated, self-radicalized individuals, rather than Islamist extremist networks — have raised tough questions about whether the government’s broad response is the right one.

Quote: In an environment that emphasizes “cultural ruptures” — pitting a radical, Salafist Islam against the West but also against moderate brands of Islam — these young men become radicalized, said Gilles Kepel, a French political scientist. “Without this atmosphere, there wouldn’t be a spark. Without a spark, there wouldn’t be an attack either.”

If you have 6 minutes, this is worth it

A challenging chapter for Paris’s bouquinistes

In normal times, Parisiens and tourists from around the world frequent the roughly 230 open-air booksellers known as “les bouquinistes,” whose boxy metal bookstalls of cellophane-wrapped classics or antique lithographs, above, stretch for nearly four miles along the Seine.

But with their earnings dwindling along with the city’s foot traffic, many booksellers are now struggling to get by. “The bouquinistes have been here since the Middle Ages,” one said. “I’d like to think that the coronavirus won’t finish us off.” (You can also read — and share — the story in French.)

Nagorno-Karabakh war: The president of Azerbaijan claimed on Sunday that his forces had captured the strategically important hilltop town of Shusha, known as Shushi to Armenians. The town, overlooking several mountain valleys and Nagorno-Karabakh’s capital, Stepanakert, is considered a linchpin to military control of the region.

Affordable Care Act: The U.S. Supreme Court will hear arguments on Tuesday in a case that seeks to eliminate the Obama-era law. If it is struck down, millions of Americans would lose health insurance and people with pre-existing conditions would struggle to buy insurance in the future.

Ethiopia reshuffle: Days after ordering a military offensive in the Tigray region, Prime Minister Abiy Ahmed undertook a major reshuffle of the security services on Sunday. The moves put a multiethnic group of his closest allies in crucial posts, observers say, strengthening his hand as he navigates a conflict that could lead to a civil war.

Snapshot: Above, a fig tree, almost a century old, in the commercial neighborhood of Westlands in Nairobi. The government authorities plan to take it down to make way for a four-lane highway but are facing growing public opposition. “This particular tree is a symbol of Nairobi,” an environmental consultant said.

Lives Lived: Alex Trebek, who hosted the American television game show “Jeopardy!” for a record-setting 37 years and who became a much-admired cultural icon somewhere along the way, died at 80 on Sunday. Here’s what he was really like.

Cook: You can bake Yotam Ottolenghi’s butternut squash and fondue pie with pickled red chiles ahead of time or serve it warm. Either way, it’s delicious — and seriously, intensely cheesy.

Read: Escape to another century. These three historical novels are your ticket.

Do: The paints we use to decorate our homes may help us cope with challenging times. Here are some tips on finding the right shade for the moment.

There’s more to explore in our At Home collection of ideas on what to read, cook, watch and do while staying safe at home.

American hopes for the future

The results of the U.S. elections seemed to crystallize the deep divisions in the country — on the virus, the economy, issues of race and even how to properly count the vote. In the days leading up to the final day of voting, Americans waited in line in record numbers to cast ballots. What did they want for America? Here are some of their answers.

“My hope is that we find our humanity again, that we find a way to be kind to one another, and have empathy in general. I’m in a hopeless place right now in terms of what’s happened to this country, and that’s a lot coming from a Black person. I’ve never seen this total lack of respect for differences.”

“I want America to not see us as animals, you feel me? I want everybody, when they look at me — I don’t want them looking at me just as a Black man. I want them to look at me as an individual.”

“I’m tired of Covid-19, so I hope the country can move past. This has been the worst time for us in our lives, and I want to see that get better and the economy get better.”

Phyllis: “I want peace within and peace outside. I want the country to come back together as caring, loving and concerned citizens, where we really live in a way where we can support each other.”

Les: “I would like for us to be sane again.”

That’s it for this briefing. Wishing you a hopeful start to the week.

Thank you
To Theodore Kim and Jahaan Singh for the break from the news. You can reach the team at briefing@nytimes.com.

P.S.
• We’re listening to “The Daily.” Our latest episode is on the election victory of Joe Biden.
• Here’s our Mini Crossword, and a clue: British “Bye, bye!” (Four letters). You can find all our puzzles here.
• The word “dehybernated” — one of the late comedian Norm Crosby’s malapropisms — appeared for the first time in The Times yesterday, as noted by the Twitter bot @NYT_first_said.
• Thomas Erdbrink, our Iran correspondent for eight years, will become our first-ever Northern Europe bureau chief.