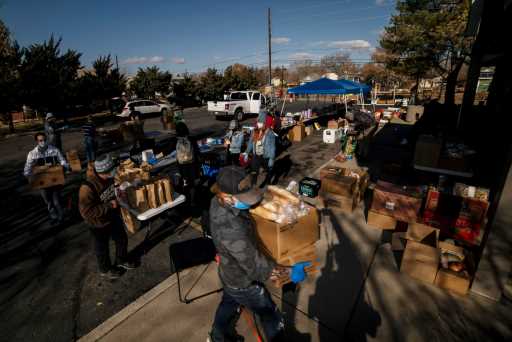 Since March, thousands of strangers in a Denver Facebook group have worked together to find an apartment for a mom and her 18-month-old who were homeless, deliver medications to people quarantined at home and feed hundreds of people who didn’t have enough to eat.

The group, Help Needed in Denver Metro COVID-19, is one of several mutual aid networks created by Coloradans to help communities weather the crushing need and instability created by the coronavirus pandemic.

For months, the couple who run the page, Jennifer and Kane Lisiecki, flitted about the metro area delivering groceries and picking up supplies to distribute. Their spare room turned into a storage depot for boxes of Pediasure, canned food and diapers.

“There were days that we’d just sit back and cry because it was still moving so fast,” Jennifer Lisiecki said.

Eight months in, the COVID-19 pandemic continues to disrupt and endanger Coloradans’ lives. Hundreds of thousands of Coloradans have lost work, a third of the state worries about having enough money to eat, and more than 2,200 people have died. Cases continue to rise, again reaching rates of infection that threaten to overwhelm Colorado’s health care systems.

In the wake of this loss, Coloradans across the state formed mutual aid networks to address people’s needs. The concept is simple: connect people who need something with others in their community who are in a position to help. The networks can be more nimble and tailored than large nonprofit organizations or government programs and are meant to meet needs that aren’t being met by those systems.

Recent requests and offers in the Lisieckis’ page were primarily for simple items. Families giving away extra food. A request for a shower chair for a woman about to have hip surgery. A woman asking for donated kids’ birthday decorations for her 2-year-old son. People seeking clothes, baby food, a tank of gas, a bed frame to put their mattress on. People quarantining after a COVID-19 exposure asking for some Lysol, some canned food.

The Facebook group started as a place for the Lisieckis’ friends and acquaintances to ask and offer help. But it soon expanded beyond their expectations. In April and May, the couple fielded hundreds of requests to join the group each day. The group now has more than 12,000 members and the couple estimated they spend about 12 hours a day managing the page.

They attribute the explosive growth to the panic that set in about the pandemic in the spring and an urge to help others weather the crisis.

The creation of a sense of community is a common additional benefit to mutual aid networks, said Danielle Littman, a doctoral student at the University of Denver working on a study of mutual aid efforts in Colorado.

“Yes, people are getting tangible needs met through mutual aid, but there are also intangible benefits like feeling more connected to their community or meeting someone through a mutual aid network that they never would have met before and building a relationship there,” she said.

Since March, Littman and the rest of the team working on the study have interviewed more than 25 people involved in Colorado mutual aid networks to learn about the systems. Littman and a DU professor, Kimberly Bender, started the study after noticing how people in their own lives and on social media were offering to to give help or supplies to others as COVID-19 forced drastic changes to daily life.

Though there seems to be an increase in mutual aid organizing during the pandemic, Littman noted that the concept isn’t new. The term “mutual aid” is often connected to anarchist beliefs, but Littman has found in Colorado that people are practicing mutual aid under a wide swath of political banners — or none at all.

In Grand Junction, organizers have created a network of thousands of people across the political spectrum that collect and distribute, food, clothes and services. People part of an “underground radical activist community” have been working together for years, organizer Laurel Carpenter said, but now the effort is gaining more attention and aid because of widespread need.

“It’s like it just clicked for the whole community,” Carpenter, a nurse, said. “We have people from every part of the community, from every walk of life, participating in this mutual aid network. I don’t know if everyone knows how radical it is what we’re all doing.”

The group’s Facebook page, Grand Junction Mutual Aid, includes more than 14,000 people. Every Tuesday the group hosts an event where people can drop off or pick up clothes, food and other supplies as well as get free haircuts and access community services. The group has also been asked to help bring meals to hotel rooms where people who were experiencing homelessness are staying after being diagnosed with COVID-19. There are no rules about who can give and who can receive, no qualifying income levels or family size restrictions.

“It’s really grown from a random hope that people will help each other to a thriving thing that people are relying on every week,” Carpenter said.

Other networks, like the Neighbors Organizing for Community Action & Power, grew out of the protests against racism and police brutality held in Denver this summer. Azria Arroyo helped found the network with Alvarez after seeing mutual aid medics tending to the injuries of protesters, passersby and journalists during the protest,

“I really wanted to expand that and get back into the sense of community and taking care of each other that I saw at the protests and growing up in a low-income neighborhood,” said Arroyo, who grew up in north Denver.

Arroyo and Alvarez hope to tap into that community to collect supplies — hand sanitizer, lotion, hand warmers, emergency blankets — to give to people who are houseless. Their focus will likely remain on people without homes throughout the winter because that’s where they see the greatest need, but it could shift as needed.

“I just don’t believe that anything is being done by the elected people so I feel like I have to do it,” Arroyo said.

It’s reassuring to see so many people willing to help out some one else, said Kane Lisiecki. But it’s horrible that so many people are lacking so much, living on such thin margins.