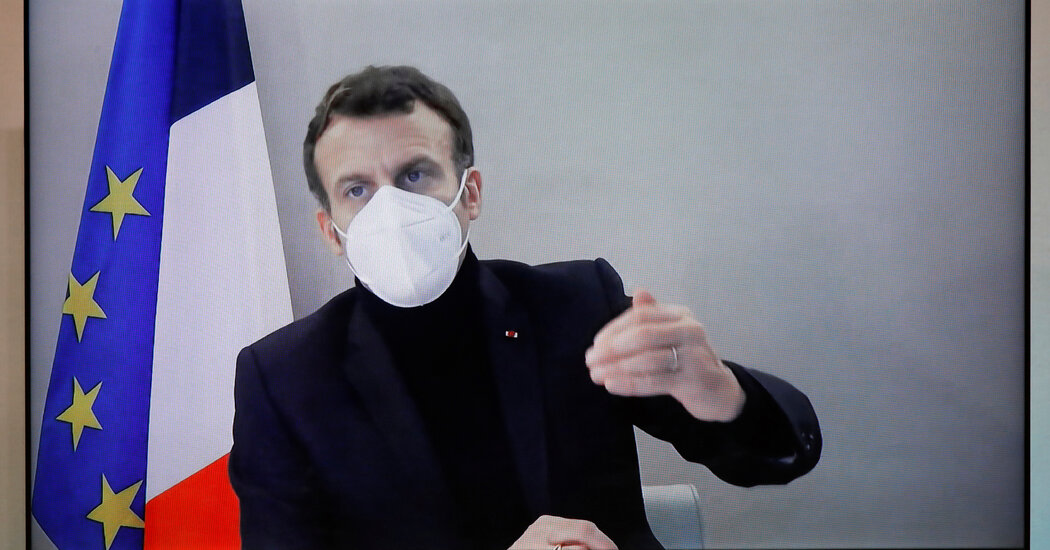 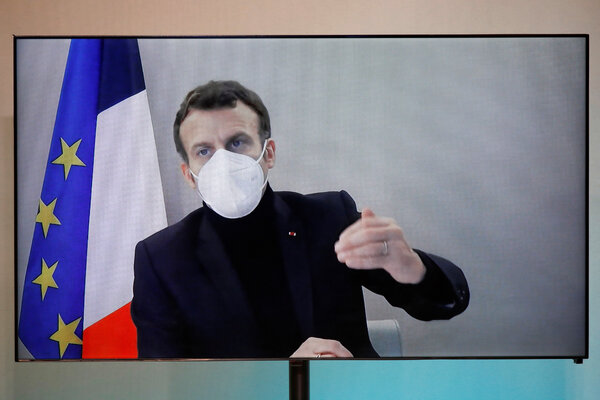 After President Emmanuel Macron of France tested positive for the coronavirus, other European leaders, including the prime ministers of Spain and Portugal, with whom he recently met have begun to self-quarantine.

At 42, Mr. Macron is not among the most susceptible to a serious bout of Covid-19, though how he contracted the virus is a mystery. He has taken its dangers seriously, unlike more cavalier world leaders who have previously been infected — including President Trump, President Jair Bolsonaro of Brazil and Prime Minister Boris Johnson of Britain.

Europe’s vaccine rollout: The 27 countries of the European Union are preparing to begin a huge vaccination campaign, with inoculations starting on Dec. 27, 28 and 29.

King Carl XVI Gustaf of Sweden said the country had failed in its response to the pandemic, in which nearly 8,000 people have died, underscoring Sweden’s outlier status in the Nordic region for its relaxed lockdown measures.

President Vladimir Putin of Russia said his government was considering giving people one dose each of its main coronavirus vaccine, instead of two, to help administer it more quickly.

Even as the U.S. begins its vaccination program and moves toward authorizing a second vaccine, it is grappling with more than 245,000 new coronavirus cases and more than 3,600 deaths on Wednesday.

The sudden lockdown in July of 3,000 public housing residents, many of whom were immigrants, in Melbourne, Australia, violated human rights laws, an investigation has found.

Putin laughs off a question about Navalny

Asked on Thursday about the near-fatal poisoning in August of the opposition leader Aleksei Navalny with a military-grade nerve agent, President Vladimir Putin of Russia responded with a laugh that, if Russian agents had wanted to kill Mr. Navalny, “they would have probably finished the job.”

He did acknowledge that Russian intelligence agents had been tracking Mr. Navalny’s movements, but insisted that the U.S. was behind the uproar over the poisoning.

Hacking allegations: Mr. Putin did not respond directly to a question about a giant, sophisticated cyberattack attributed to Russian agents who broke into the systems of private U.S. companies and the networks of several U.S. agencies, including the State Department and parts of the Pentagon.

Opinion: The magnitude of the national security breach is hard to overstate, writes Thomas Bossert, President Trump’s former homeland security adviser. It will take years to know for certain which networks the Russians control and which ones they just occupy.

Related: A court in Switzerland halved Russia’s four-year ban from global sports for doping athletes, but the country’s teams will not be able to compete in the next two Olympics — the Tokyo Games next summer and the 2022 Winter Games in Beijing.

The leader of the Islamist militant group Boko Haram has claimed responsibility for a raid this week in which armed men took more than 300 young boys from their boarding school in northwestern Nigeria.

For six days, parents kept a vigil at the school. Then, late Thursday night, the best possible news: The state governor announced that all of the abducted boys had been released and would be reunited with their parents the next day, following murky government negotiations with their captors.

Context: The gunmen’s raid on the city of Kankara was an agonizing replay of the group’s 2014 abduction of 276 schoolgirls in Chibok. A hundred of the girls were still unaccounted for years later.

If you have 12 minutes, this is worth it

An elixir from another time

Only two Carthusian monks, one of whom is pictured above, know the full recipe for Chartreuse, that sharp, bright, profoundly herbal liqueur, with its distinctive shade of acid-green. Even in the pandemic they stuck to their Middle Ages motto: “The cross is steady while the world turns.”

This was never going to be a normal year for the drink, or the monks themselves. But it is hardly the first time the Carthusians have reinvented themselves, even as they cling to a way of life that has scarcely changed over almost a thousand years.

Jeffrey Epstein: Jean-Luc Brunel, a former modeling agent and associate of the financier, was arrested at an airport near Paris this week as part of an investigation into allegations of rape and sexual assault involving Mr. Epstein, including against minors.

Euthanasia: Spanish lawmakers on Thursday voted in favor of a law decriminalizing euthanasia and physician-assisted suicide, making it likely that Spain will join a handful of other countries where terminally ill patients can legally obtain help to end their lives.

Terrorism: Four men involved in a thwarted terrorist attack on a Paris-bound train in 2015 were convicted of attempted murder, complicity and criminal terrorist association. They were sentenced to prison terms ranging from seven years to life.

Sexual assault legislation: Denmark toughened its rape law on Thursday by criminalizing sex without explicit consent. The law previously required proof of violence, threat or evidence that the victim was unable to fend off the assault.

Call center scam: The police in New Delhi say they have arrested over 50 people in connection with a two-year call-center fraud that bilked more than $14 million from over 4,500 Americans.

Snapshot: Above, New York’s East Village late Wednesday as the city was hit by its biggest snowfall in years. More snow and cold are in store from the Mid-Atlantic to the Northeast.

Lives lived: Known for the preternatural spaciousness and melancholy calm of his music, the composer and pianist Harold Budd, who collaborated with art-pop artists like Brian Eno and Cocteau Twins, died at 84 this month from complications of Covid-19.

What we’re reading: This very manageable dive into the deep fryer, from Radio New Zealand’s joyous summer magazine, which asks: Where did the country’s beloved potato fritter originate? And why do Kiwis so often get an extra one for free?

Cook: Serve these soy-butter basted scallops with wilted greens and sesame on a fluffy mound of steamed white rice.

Watch: Most of us have spent so much of this year binge watching. A select few episodes cut through the clutter: Our television critics picked the best TV episodes of 2020.

Play: From The Sims 4 to Call of Duty, these were the video games that got Times journalists through the year. (The list may also serve as a gift guide for any gamers in your life.)

It’s Friday! Pour yourself a drink, stiff or otherwise, and explore our At Home collection of ideas on what to read, cook, watch, and do while staying safe at home.

The year in climate

2020 has been a crisis year: a pandemic, economic turmoil, social upheaval. And, running through it all, climate change. Our climate team documented the shifts, from the science to the human cost. Here are some of this year’s big stories.

Fire: 2020 began with huge bush fires burning the coast of Australia, which had just had its hottest, driest year on record. Half a world away, California recorded its own worst fire season this fall, driven in part by hot, dry conditions.

Ice: Polar ice melted, temperatures soared and a record number of storms formed and made landfall in the U.S. — the most ever in one year. The Arctic continued its shift toward a new climate in 2020, as the effects of near-record warming surged, shrinking ice and snow cover.

Inequality: The impacts of climate change are not equally felt throughout the world. The people least responsible for climate change are among those most hurt by its consequences. In July, floods in Bangladesh left a quarter of the country under water. Nearly everywhere, heat waves are more frequent and longer lasting than they were 70 years ago. If you’re poor and marginalized, you’re likely to be much more vulnerable to extreme heat.

The pandemic: In many ways, the coronavirus pandemic echoed the threat of climate change. It was global in scale, hit the vulnerable hardest and required collective action to avert the worst. But it moved more swiftly. The virus also drove down emissions, but not in the way anyone would have wanted.

A Gmail outage caused some of you not to receive your Morning Briefing every day this week. I’m sorry about that, and hopeful it won’t happen again. You can catch up with any editions that you did not receive here.

And thanks once again for starting your day with The Times. See you next week.

Thank you
To Theodore Kim and Jahaan Singh for the break from the news. You can reach Natasha and the team at briefing@nytimes.com.

P.S.
• We’re listening to “The Daily.” Our latest episode is about the U.S. government’s antitrust lawsuit against Facebook.
• Here’s our Mini Crossword, and a clue: Harbor cities (five letters). You can find all our puzzles here.
• Matina Stevis-Gridneff, a Brussels correspondent for The Times, discussed covering migration across continents on the Media Tribe podcast.