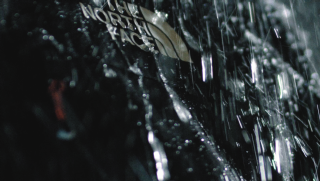 The North Face is facing a new suit by the graffiti artist Futura over an apparently atom-like design.

The outdoors brand’s Futurelight outerwear line features a geometric-shaped logo confining a series of overlapping ovals and shapes within. The graffiti artist claims the design is a copy of his “atom” sketch that he said was a recurring motif in his oeuvre and functions like a signature design emblazoned on his art work as well as apparel collaborations.

In a trademark lawsuit filed Tuesday in California federal court, Leonard McGurr, known professionally as Futura, claimed that the outdoor brand was using the design without his consent, despite having worked together in the past.

“A number of revered brands pay to leverage the Futura persona in their marketing, in order to associate themselves with his brand of urban cool,” Futura said in the complaint. “In this regard, he has previously collaborated with Nike, Uniqlo, LVMH, the New York Mets and Yankees, and Comme de Garçon — and even defendant The North Face.”

A representative for The North Face said the company wouldn’t be able to comment on ongoing litigation.

The Futurelight line, which the retailer launched in 2019, features a novel waterproof and lightweight fabric meant for weathering outdoor activities even in extreme conditions.

Streetwear’s Leaders of the New School

Futura, known for graffiti and abstract artwork, has over the years incorporated an atom design in his works, which also appears as a logo on apparel and gear featuring his work, including Nike high-top sneakers. Futura’s design, as depicted in his works illustrated in the complaint, features intersecting circular planes and dots bounded within a spherical shape, creating the look of an atom.

Futura claimed in the suit that the name of The North Face’s Futurelight line also evokes his persona and creates the impression of his involvement.

“If their logo weren’t enough to conjure Futura in the mind of a consumer, defendants call their new apparel line ‘Futurelight,’” he said in the suit. “In other words, the similarity of the graphic designs and the names is no coincidence: defendants purposefully invoked plaintiff in order to suggest an association with him.”

The suit includes unfair competition, unfair business practices and trademark claims, and asks the court to order The North Face “to immediately recall and remove any and all infringing products from the marketplace.”