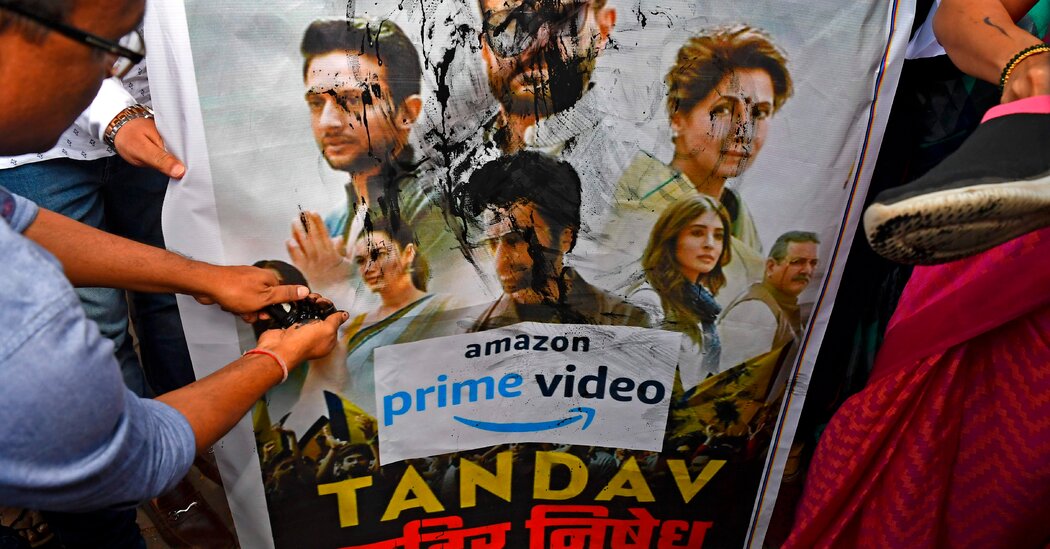 NEW DELHI — Bollywood once again has fallen into the cross hairs of India’s Hindu nationalist ruling party — and major Western streaming services like Amazon and Netflix increasingly find themselves caught in the middle.

Two separate criminal complaints were filed with the police over the weekend against the makers of “Tandav,” a splashy new big-budget web series on Amazon. The fast-paced political drama, which seems to borrow heavily from India’s political scene, may cut uncomfortably close to current events and the country’s biggest controversies.

The complainants, which include a politician with the ruling Bharatiya Janata Party, have insisted that the government pull the series off the air or take out key scenes. Among other objections, they accused the series of disrespecting Hindu gods, belittling members of individual castes and sullying the office of the prime minister.

If the police find merit to the complaints, Amazon and the show’s promoters could wind up in criminal court.

Ali Abbas Zafar, the director of “Tandav,” on Monday posted a statement on his Instagram account saying the show “is a work of fiction and any resemblance to acts and persons and events is purely coincidental.” However, the statement said, the cast and crew “take cognizance of the concerns expressed by the people and unconditionally apologize if it has unintentionally hurt anybody’s sentiments.”

Defenders of the show say those complaints are pretexts. The pressure on Amazon to drop the series, they say, is part of an increasingly intolerant atmosphere in India that affects even Bollywood, India’s film and entertainment industry. Actors, comedians, producers, artists and anyone who dares to question the government, even indirectly, can find their careers in peril, they say.

“When you take a stand, you have to pay a price,” said Sushant Singh, a Bollywood actor who has openly campaigned against several of the government’s policies. “One doesn’t even get surprised these days. And one does not know how to react anymore.”

These attitudes complicate the ambitions of both Bollywood studios and major companies to capture a huge Indian audience through their laptops and smartphones. Like the Hollywood film industry, Bollywood has increasingly turned to streaming as pandemic restrictions slam the theater business.

Global companies are helping to provide the platforms for Indian viewers. Major streaming services like Amazon, Netflix and Hotstar, which is owned by Disney, have invested heavily in a country they see as holding great growth potential.

But they have been caught up at times in India’s increasingly restrictive political environment.

Two months ago, an on-screen kiss put Netflix into a similar bind. Hindu nationalists were outraged that a series on Netflix showed a Hindu woman kissing a Muslim man in front of a Hindu temple — a scene that the Hindu nationalists felt violated multiple taboos. The Hindu nationalists have demanded the authorities investigate Netflix and have called for a boycott. No charges have been filed.

The true objection to “Tandav” may simply be that it’s too real. The opening episode looks almost like a newsreel. It cuts from farmer protests to student protests to police killings — all events that have happened in recent months under the administration of Narendra Modi, India’s Hindu nationalist prime minister.

It doesn’t shy away from touchy topics. In one scene, a fictionalized Indian prime minister belittles a lower caste politician, touching on the sensitive topic of the age-old Hindu social system.

Even the episode’s title is provocative. It is called “Dictator.”

“They are using abusive language and trying to defame the post of the prime minister, clearly hinting at our current prime minister,” said Ram Kadam, a B.J.P. lawmaker who filed one of the criminal complaints.

The authorities in Uttar Pradesh State, home to many recent police killings and run by one of Mr. Modi’s closest allies, a Hindu monk turned chief minister, seem especially offended. They said in a filing with the police there that the Amazon series portrays the post of prime minister “in a very indecent manner.” On Monday, state officials warned that the filmmakers should “prepare for arrest.”

In the past few months, officials belonging to Mr. Modi’s party have ratcheted up their pressure on some of the most successful artists in the country. Critics see that pressure as an effort to quash views that question Hindu nationalist ideology, which seeks to turn India into an overt Hindu state and push non-Hindu minorities to the margins.

The drug authorities have gone after leading actors on charges connected to marijuana possession. A popular comedian was recently jailed for allegedly cracking jokes about Mr. Modi’s right-hand man, Amit Shah, even though the authorities have offered no proof that the comedian said what they have alleged.

The pressure extends into other walks of life. An Indian airline pilot and decorated military veteran was fired from his job this month after tweeting that the prime minister was “an idiot.”

Indian cinema tends to be culturally conservative, with sex scenes and obscenities discouraged by India’s censor board. But until recently, online content in India fell into a gray area.

In November, the Indian government ruled that the Ministry of Information and Broadcasting, which is currently run by Prakash Javadekar, a close ally of Mr. Modi, has the authority to regulate online content.

Hindu nationalists are now urging the government to step in.

Online broadcasts are “full of sex, violence, drugs, abuse, hate and vulgarity,” wrote Manoj Kotak, a B.J.P. lawmaker, in a recent letter to Mr. Javadekar. He closed his letter by telling the minister to set up a regulatory body for online content and “in the meantime ban controversial web series ‘Tandav.’”