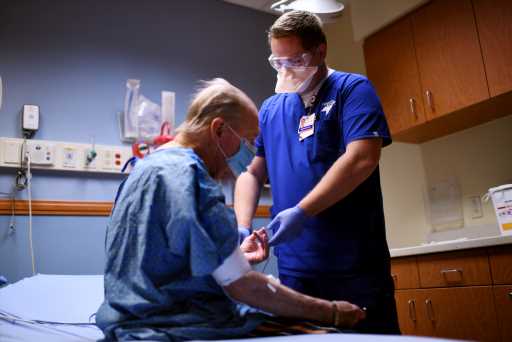 Colorado state Rep. Kyle Mullica is always a little on edge when he arrives for his 12-hour emergency room shifts as a trauma nurse at Presbyterian St. Luke’s Medical Center in Denver. He might have to treat someone who was shot, someone giving birth or someone in the midst of a mental health emergency.

“When I’m in ER mode or nurse mode, everything else is out the window,” Mullica said. “You’ll see waves of patients coming in and you just have to be ready.”

With the pandemic, his readiness was challenged as he had to figure out how best to stabilize COVID patients and ensure he kept himself — and his family — safe.

That’s why after months of seeing COVID patients and dealing with the ramifications of the pandemic both as a lawmaker and father, the Northglenn Democrat is even more committed to addressing inadequacies in the health care system and fighting for patients and health care providers. And it’s not just about protecting the frontline workers — whom Mullica said are rightly lauded for the work they do — but also their families, who often aren’t acknowledged.

Mullica is one of three frontline health care workers in the Colorado Legislature; Democratic House Rep. Yadira Caraveo is the only physician and Senate President Leroy Garcia works as a paramedic in Pueblo. All of them had advocated for more accessible, affordable and equitable health care for Coloradans before the COVID-19 crisis. And now, Mullica said, “what this pandemic did is it showed why we’re doing this.”

The 2021 legislative session began as scheduled Jan. 13, the same day Colorado’s coronavirus numbers topped 366,000 — far more than on March 14, when last year’s session was halted. But lawmakers only met for three days to pass time-sensitive bills and plan to break until at least Feb. 16 in the hopes that case counts will decrease and that they themselves will be vaccinated.

The day after the 2020 session went on hiatus, Mullica picked up an ER shift. His wife cried but understood the need to use his skills to help others.

“The fear that I saw in (emergency room colleagues’) eyes — I’ve never felt that feeling in the ER, because we’re used to those scary environments, we’re used to those crazy environments — but it was just this pure fear,” he said. “And they didn’t skip a beat. They didn’t skip a beat going into those rooms to take care of patients and doing what they signed up to do.

“They’re doing all this, and the decisions and the policies we’re passing at the Capitol are impacting them and their safety. They’re impacting our patients.”

Accessibility for health care and other possible bills

Mullica has made health care his priority in the legislature since taking office in January 2019, including sponsoring a bill on vaccines last year. Since the pandemic began, he hasn’t hesitated to advocate for public health issues, including pushing for a statewide mask mandate, even as Gov. Jared Polis initially resisted, and he’s called for more personal protective equipment to be given to frontline workers.

He strategized with Democratic representatives to come up with a game plan for safety at the Capitol, one they followed as the 2021 session began.

This year, Mullica and Caraveo, a Democrat from Thornton, paired up to work on a bill meant to ensure health care providers in fields like plastic surgery are trained to treat critical patients in public health crises so that Colorado doesn’t have to rely as heavily on out-of-state resources.

Although Republicans don’t necessarily agree with all of Democrats’ proposals for health care legislation this year, some GOP lawmakers also plan to introduce bills related to health care and the pandemic.

In his opening day speech, Senate Minority Leader Chris Holbert of Douglas County said his caucus is working on bills that would “increase transparency, bring down costs and expand options for Coloradans without putting their local hospital at risk of closure.” It includes one to create a committee that would review the effects of proposed legislation on health insurance in an effort to ultimately bring down rates and expand access.

House Minority Leader Hugh McKean of Loveland hopes his caucus will look at budget issues related to Medicaid, and some of his members are working on bills related to health insurance coverage.

Caraveo, like Mullica, feels more resolve to address problems that have been highlighted by the pandemic. As a pediatrician at Peak Pediatrics, she hears stories about families’ problems she can’t solve as their doctor.

“It’s definitely reinforced all of the things that I ran for office to address: housing instability, health care access continues to be impaired by the fact that we rely on an employer-based system, and so when people lose their jobs, they lose their health care,” said Caraveo, who was elected to a second term in November. Plus, she believes disparities in education are only growing with remote learning.

Many of the coronavirus patients Caraveo treats come in because they have mild symptoms that often are confused as the cold or flu, but she said a COVID diagnosis hurts the entire family. She cites one example of a young girl in her clinic who was diagnosed with COVID. Her entire family had to isolate for two weeks and the mom had to take unpaid time off work. A month later, the family was back — the young girl’s brother tested positive, and the process started over.

“I’m seeing a lot of parents crying honestly about how they’re going to manage being away from work that long,” Caraveo said. “(The patient’s mother) cleans houses, so it’s not like it was a formal job that was going to follow all of the paid leave and paid sick days.”

Mullica’s goal of helping as many people as he can did have a cost — a common theme for health care workers during the pandemic. When he spent five weeks in Chicago starting in April to help with COVID patients at the Cook County Jail, he missed his family (he has three kids, ages 2, 5 and 7), his support system and his youngest daughter’s first steps.

“It was a sacrifice, but it’s something that I hope to look back on and be able to talk to them about when they’re older that we have an obligation to help people when they need help,” Mullica said. “And if you have the ability to do it, I want them to have that instilled in them that they should.”

Garcia, the Senate president, has multiple family members in the medical field and who are frontline workers. He took all the precautions necessary, Garcia said, and tried not to think too much about the possibility of contracting the virus.

Garcia said working as a paramedic for American Medical Response in Pueblo has been eye-opening — especially when it comes to the health care system as a whole.

He recalls driving home from Denver one night while it was snowing and thinking, “I hope there aren’t a lot of wrecks tonight,” because COVID hospitalizations were high and there may not be enough ICU beds for people injured in accidents.

Garcia wants the General Assembly to keep accessibility in mind this session, ideally considering an expansion of telehealth options and community paramedicine to relieve the system by getting patients treatment earlier, even during a pandemic, as well as reducing prescription drug costs.

“Some people are looking at it from a lens of just the pandemic,” Garcia said. “In reality, there’s more to it than that.”

Vaccines and the future

Health care providers have warned since vaccines became available in Colorado that those are a start, but the crisis is far from over. The distribution phases will take time, as will developing herd immunity.

“We can see the light, but we’re not going to be exiting the tunnel anytime soon,” said Caraveo, who hasn’t been able to hug her dad since March and has spent a lot of time alone outside work because she’s trying to protect her elderly parents.

Plus, Mullica said, emergency rooms are still full, even as COVID caseloads decrease, due to seasonal respiratory issues in addition to coronavirus patients.

Mullica was the first Colorado state lawmaker to receive the COVID-19 vaccine because his job puts him in direct contact with COVID patients.

He was also among the first to get the vaccine, period, even while other health care workers initially hesitated. He and his wife Julie Duran Mullica, an infection prevention specialist, had reviewed the research and felt confident the vaccines are not only safe and effective — they’re the only way to end the pandemic.

“I wanted to obviously walk that walk and lead by example a little bit and really get it out there that we need to trust the science behind this (vaccine),” Mullica said.

The second-term lawmaker is no stranger to controversy about vaccinations: He championed long-fought-for legislation that passed last year to boost immunization rates by tightening the process to waive required vaccinations for school children.

The vaccine has provided families like Mullica’s with some relief. But he still operates as he did before: When he comes home after a shift in the ER, he goes into the garage, removes his scrubs and puts them in a bag so they can be washed. Then he goes inside and showers before any of the kids can hug him. His phone and keys and other items stay in the garage until he can disinfect them.

Other state lawmakers have also started to get vaccinated in preparation for the full legislative session, after the governor bumped them up in the priority list as essential workers. (Editor’s note: Two Denver Post reporters and a photographer were also offered access to vaccines.)

Although data shows positive results for individuals who are vaccinated, there’s not enough evidence yet to determine how much the immunizations prevent a person from spreading COVID. The vaccines have also not yet been approved for children.

Because of that, Caraveo and other health care providers are still pleading with Coloradans to avoid gatherings, keep wearing masks and continue social distancing, if not for their own sakes, then for the sake of others — including the health care workers. The virus is still continuing to spread, and a new variant has been discovered here in the state.

Garcia called the vaccine’s arrival an assurance that “this harrowing time is almost over.”

“From a morale standpoint with workers, I’ve definitely noticed an improvement,” Mullica said. “This has been a long 10 months.”