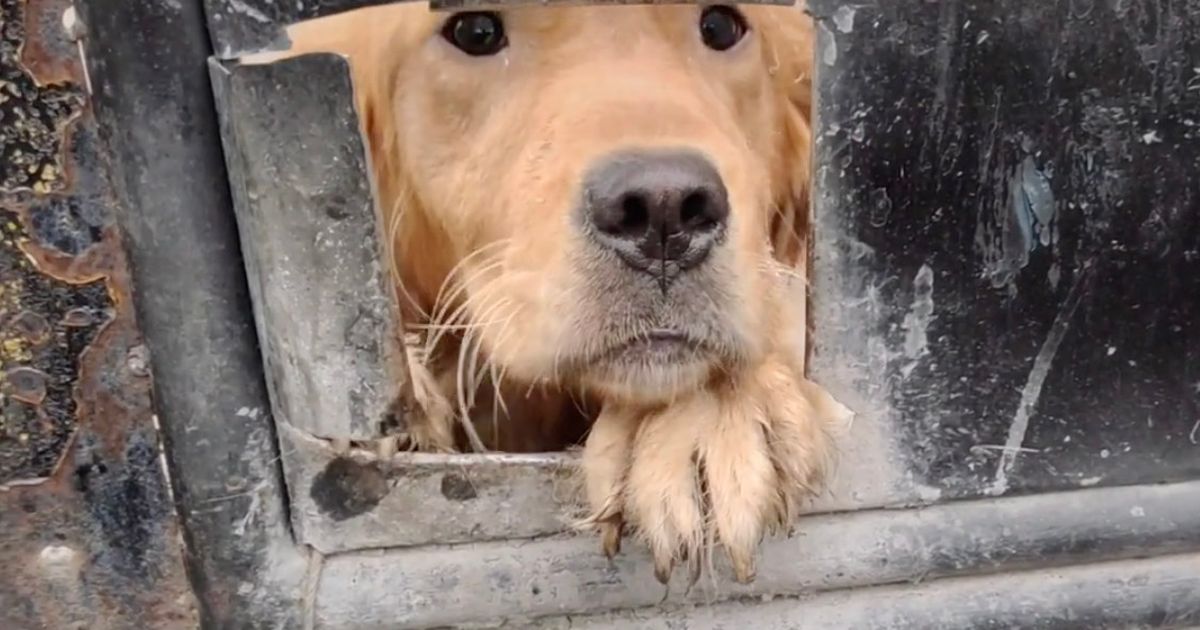 A man has made a desperate plea online after seeing a golden retriever "crying" moments before he was taken away inside a slaughterhouse.

Animal lover Xiao Chi found a dozen dogs waiting to be killed at a slaughterhouse in the city of Jixi, in Heilongjiang province of northern China in September last year.

The dogs were mostly pets sold by their owners or stray dogs captured from the street, he explained.

In a video posted on Douyin, Chi stands outside the gated slaughterhouse and shows what's trapped inside the harrowing place.

Some of the dogs are locked up in a kennel and others roam around the front yard.

He says: "So many dogs here, they are so skinny."

Suddenly, a golden retriever jumps up to the small viewing window and catches Chi's attention.

The desperate pooch pokes his head outside and yowls at him, as if he is crying for help. He also seems to have a tear in his eye.

"This golden retriever," Chi continues. "I feel like he's crying, begging for help. Oh, he is really crying.

At this point, the slaughterhouse owner appears and the poor canine walks away.

Chi says he can see another golden retriever and also an Alaskan malamute before the pooch jumps up on screen again.

"My heart aches, he wants to live," Chi sighs. "What should I do? How can the owner be so cruel to their dog?"

The clip ends with Chi saying the golden retriever was taken away from the front yard shortly after.

He made a plea to viewers to help save dogs from slaughterhouse and stop consuming dog meat.

Viewers were left in tears and said they felt for Chi. One said: "The golden retriever is really crying. It makes me cry too, this is too cruel."

"Please save him!" another pleaded. "The crying golden retriever is so lovely and it doesn't deserve this!"

In an update video, Chi went back to the slaughterhouse and looked for the golden retriever.

He said: "Oh no, the golden retriever's gone. There's only the other one left, the cream-coloured one."

After a long-winded negotiation with the people inside the slaughterhouse, Chi spent 4,100 yuan (£462) to save five dogs, including the other golden retriever.

He added: "I'm doing all I can to save as much dogs as I can, but the slaughterhouse owner keep raising the price. He realises he could earn from it.

"This is a never-ending nightmare."

China has banned two dog meat trading in two cities so far as a clampdown on the brutal trade. Both Shenzhen and Zhuhai in the southeastern region have announced the new animal protection law last year.

According to Humane International Society, an estimated 10 million dogs a year are killed for the dog meat trade and consumed by less than 20% of the Chinese population in the country.