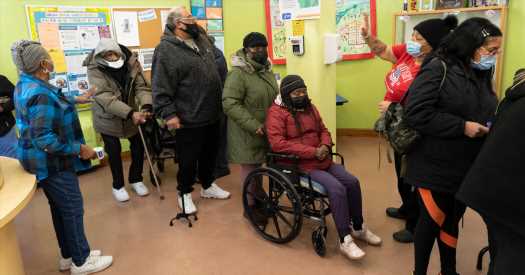 President Biden, under intense pressure to speed up the pace of coronavirus vaccination, said on Tuesday that his administration was nearing a deal with two manufacturers that would enable 300 million Americans to have their shots by the end of the summer.

Supplies to the states will be increasing 16 percent beginning next week, according to figures provided by Mr. Biden, who promised that his administration would give governors something they had long asked for: certainty over the supply they would receive. He said states would now have three weeks’ notice of how many doses they would get.

“Until now we’ve had to guess how much vaccine to expect for the next week, and that’s what the governors had to do: ‘How much am I getting next week?’” the president said. “This is unacceptable. Lives are at stake here.”

But while Mr. Biden said the moves were “going to allow millions more Americans to get vaccinated sooner than previously anticipated,” that was unlikely to be the case. Next week’s increase to the states was expected as vaccine makers ramp up manufacturing. And the replenishing over the summer — when the government was likely to run out of supply — was anticipated under contracts signed by the Trump administration, which gave the government options to continue increasing its commitments in increments of 100 million doses.

Even so, experts said the administration was wise to lock down as many doses as it could as soon as possible, even if the vials would not be delivered until later in the year. Until now, the federal government had secured enough doses of federally approved vaccine to cover only 200 million of the 260 million adults eligible to be inoculated.

Governors appeared to cautiously welcome the news, which was delivered by Jeffrey Zients, Mr. Biden’s coronavirus czar, on a conference call before the president’s announcement.

“Every governor in America faces the same obstacle: The extremely limited supply of vaccines produced and allocated is only a tiny fraction of what our citizens desperately need,” Gov. Larry Hogan of Maryland, a centrist Republican, said in a statement. “We appreciate the administration stating that it will provide states with slightly higher allocations for the next few weeks, but we are going to need much more supply.”

Mr. Biden’s announcement came as representatives from the State Department and the Centers for Disease Control and Prevention urged all American citizens thinking about traveling abroad to “seriously reconsider” their plans in light of the new travel regulations that went into effect on Tuesday. Those rules require international travelers to present a negative coronavirus test or proof of recovery before boarding a flight bound for the United States.

Ian G. Brownlee, the acting assistant secretary of the State Department’s bureau of consular affairs, said that if U.S. citizens traveled abroad and happened to contract the coronavirus, they should be prepared to deal with the extra lodging and medical costs required with a delayed trip back home.

“All travelers should have a Plan B,” Mr. Brownlee said. “We urge folks to postpone their trips if they’re able.”

Just one week into his administration, Mr. Biden is facing a convergence of crises. The vaccine rollout he inherited from his predecessor has been rocky, leaving Americans angry and frustrated over vaccination appointments canceled for lack of supply. At the same time, new, more infectious variants of the virus are making vaccination all the more urgent.