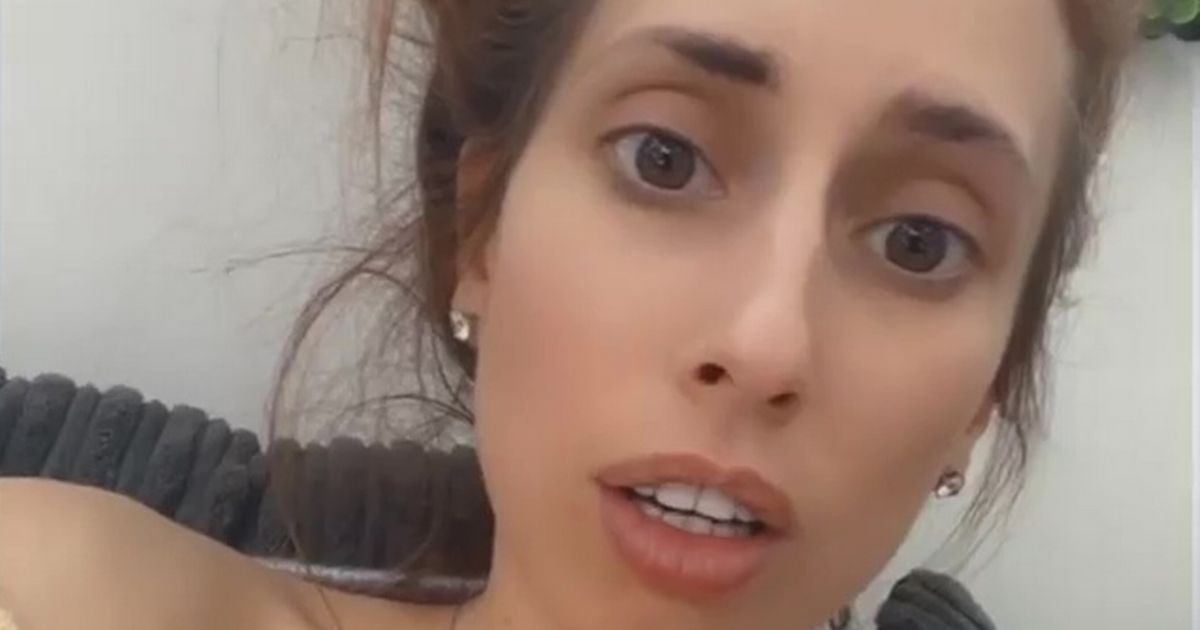 Stacey Solomon ranted fiancé Joe Swash is "lucky" they're still getting married after his latest "antics" and 'betrayal' at home.

The 31-year-old told her 4.1 million followers on Instagram she was left "fuming" after Joe "stole" food at home.

She said she felt "stuck between a rock and a hard place" as he took food she had saved for herself, and had already prepared lunch for him and her kids.

The Loose Women panellist told fans "old piggy" Joe stole egg sandwiches that she had made for herself.

Stacey exclaimed: “I just spent the last hour making egg mayo sandwiches for everybody, because that is the kind of incredible girl that I am.

“And I left myself a tiny bit of egg mayo in a bowl so I could make myself a sandwich when everyone had finished.

“And old piggy over here steals it, makes himself a second sandwich!” She added while glaring at Joe.

The Dancing on Ice winner then attempted to calm his fiancee down by urging her to remember the message from the neon sign she had bought to decorate their house.

Stacey had placed the sign, which read “You are exactly where you need to be”, on a feature wall, covered in artificial leaves, reports The Express.

Joe argued in reference to the sign: “Oh calm down! It’s only egg mayo, remember your sign on the bush.”

“Well you’re not exactly where you need to be are you?” Stacey hit back.

“Where am I meant to be?” Joe asked her in response.

“In the bin,” the Tap To Tidy author laughed.

Stacey went on to detail her frustrations over the sandwich further in the captions of her Instagram Story videos.

There's MUCH more where that came from! Want all the jaw-dropping stories from the world of showbiz and up to the minute news from TV and soaps?

Well, we've got you covered with our showbiz, TV and soaps newsletters – they'll drop straight into your inbox and you can unsubscribe whenever you like.

We'll bring you the inside track from telly expert Ed Gleave and soap specialist Sasha Morris. Oh, and your daily fix of Piers, Katie Price, Demi Rose and all your other Daily Star favs.

The mum-of-three penned: “I’m actually in that mood where I could cry over egg mayo.

“There’s not even any eggs left to start again… I’m fumin’.”

She added: “He made himself a second sandwich with MY egg mayo. Absolute cheek of it.

“How dare he reference my bush sign as a defence. He’s deffo not exactly where he needs to be [angry face emoji].”

Stacey then admitted she still hadn’t gotten over Joe’s misstep and joked she’s “stuck between a rock and a hard place” over going ahead with their marriage.

The star told fans she was working on a creative project for their impending nuptials, saying: “Joe took the boys out so I sat and tried a little table number planner idea…

“But I want a wedding so I’m stuck between a rock and a hard place really [crying with laughter emoji].”

Stacey and Joe got engaged on Christmas Eve last year and the former recently revealed she is hoping they will tie the knot this summer, depending on Covid restrictions.