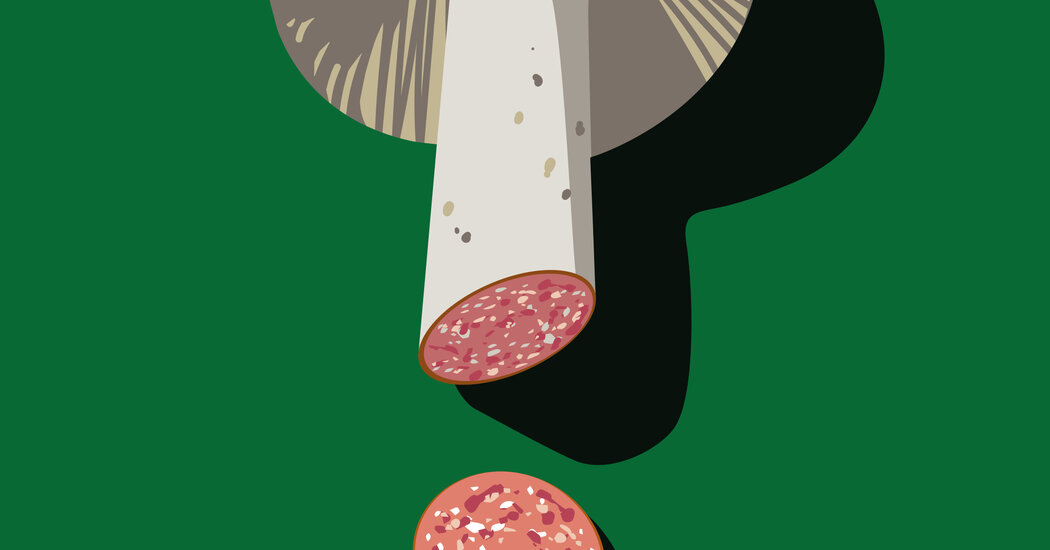 I liked my patties thin and then I liked them thick. There was the Cheddar period, followed by the Roquefort interregnum. Sesame-seed buns gave way to English muffins as ketchup traded places with special sauce or even, God help me, guacamole, which really was overkill.

But no matter its cradle or condiment, the hamburger was with me for the long haul — I was sure of that.

A few days ago I tripped across news that McDonald’s was testing a vegetable-based patty, coming soon to a griddle near you. The McPlant burger, they’re calling it — a McOxymoron if ever I’ve heard one. And McDonald’s is late to the game. Burger King has been selling a meatless Impossible Whopper since 2019. Dunkin’ has been serving a Beyond Sausage Breakfast Sandwich for nearly as long.

Meanwhile, Bill Gates has been telling anyone who will sit still long enough to listen about his investment in a “pretty amazing” start-up that uses a protean protein made from an especially hardy fungus for meatless patties, meatless balls and vegan versions of various dairy products. Over the past weeks, he has plugged it on my Times colleague Kara Swisher’s “Sway” podcast and in Rolling Stone.

On “60 Minutes” he ate yogurt made by the start-up, Nature’s Fynd, with Anderson Cooper, who raved, “Oh, this is good.”

This is the future: not a meatless one — not anytime soon — but one with less meat. I’m now sure of that. It’s the inevitable consequence of alarm over climate change, to which livestock farming contributes significantly. (Gates’s meatless musings were in the context of his new book, “How to Avoid a Climate Disaster.”)

It’s the moral of the McPlant. It’s also the takeaway from Nature’s Fynd, whose story is not just a parable of innovation and imagination but also a glimpse into the ever more muscular push for alternative protein sources and the fleetly growing market for them.

In the relatively brief span of time since Impossible Foods and Beyond Meat introduced their now-ubiquitous burger alternatives, a meatless gold rush was born. “Private investment, public investment, researchers working in this space, start-up companies, announcements from established meat companies launching alternative protein initiatives: All of these were essentially flat until about four or five years ago,” said Liz Specht, the director of science and technology for the Good Food Institute, a nonprofit that promotes meat alternatives. “And then we saw a classic hockey-stick up-swerve.”

The swerve is happening along three main tracks, united by their elimination of the killing of livestock — and of livestock’s big carbon footprint — from the culinary equation.

One track, represented by Impossible Foods and Beyond Meat, focuses on the refinement of plant-based products that get better and better at providing the pleasures of meat. Agriculture and its strains on Mother Earth remain central.

That’s not so with the track of what Specht calls “cultivated meats,” or meat essentially grown from the stem cells of animals. For now, though, this is an expensive and uncertain proposition.

Nature’s Fynd, which has attracted almost $160 million in funding, belongs to the third track: fermentation-derived proteins made from microorganisms, like fungi, that can be coaxed in a meaty, cheesy, creamy or milky direction. This track is arguably the most exciting — in terms of affordability, versatility, environmental gentleness and untapped possibility. There are microbes out there just waiting to feed us.

The one that Nature’s Fynd turned into its trademark protein, which it calls Fy, came from Yellowstone National Park of all places. Did you know that the park is a geological and ecological outlier, an extreme environment that’s home to herculean organisms whose ability to survive there suggests a potency deployable in any number of ways? Me neither.

But Mark Kozubal, a Montana scientist and outdoorsman, was up to speed and, more than a decade ago, was investigating the park’s hot springs and other waters for an “extremophile” that might be a useful biofuel. He came across an unclassified fungus that instead had culinary potential.

It has since been named Fusarium strain flavolapis. (Flavo lapis is Latin for yellow stone.) Nature’s Fynd got commercial rights to it from the federal government through a benefits-sharing agreement; the company supports continued research for the park. Kozubal is now the chief science officer for the company.

When the fungus is grown via a fermentation process patented by Nature’s Fynd, it produces rectangular slabs of Fy that look sort of like thick, gargantuan lasagna noodles. Fy can then be pulverized and watered down for soft or liquid foods, or it can be sculpted into nuggets, patties, balls and more.

“It’s got the texture that we want and the protein content that we want, but it’s a blank canvas that we can then give to food scientists and chefs to build into the products,” Kozubal told me. And it’s produced on racks of stacked trays — in a warehouse in the Chicago meatpacking district, as it happens — using much less space and water than traditional agriculture demands.

Last month, Nature’s Fynd unveiled a direct-order breakfast combo of faux-sausage patties and a mock cream cheese for $14.99 and quickly sold out. It’s restocking and expects to have those products plus others — maybe the yogurt, maybe meatballs — on store shelves later this year. If all goes well, it will expand from there. A burger can’t be too far off.

“There’s tremendous potential here,” Specht told me, referring to fermentation-derived proteins. She added that while they’ve been around awhile — a British company, Quorn, has been making them for decades — they seem to be taking off only now. For example, the companies Meati Foods, Mycorena and Prime Roots are all developing or selling products along these lines.

But given the long love affair that many humans, including this one, have had with animal meat, is there really a chance that these substitutes can make all that much headway in the near future? Thomas Jonas, the chief executive of Nature’s Fynd, said that a conspicuous change in America’s beverage-scape suggests so.

“Ten or 15 years ago, if you were looking at soy milk or almond milk, you were looking at something that was considered to be for health stores and tree-huggers and hippies, right?” he said. Now, both take up considerable space in every supermarket I visit, and there’s nary a coffee shop without one or the other. Nobody, Jonas argued, would have predicted that.

Also, he said, there’s a discernible awakening of people’s consciousness of the degradation of the environment, our contribution to that and the impact of individual behavior on communal health.

The coronavirus may have accelerated that. When Nature’s Fynd did online surveys of American consumers before the pandemic and asked if they’d want to try foods like the ones it was making, about 50 percent said yes, Jonas told me. A few months into the pandemic, that number rose to 66 percent.

But receptiveness to fermentation-derived proteins is one thing. Routine consumption of them is another — and will hinge primarily on how they taste. I asked Jonas for samples. He sent me the Nature’s Fynd versions of cream cheese, cocktail meatballs, sausage patties and chocolate mousse.

All but the cream cheese impressed me, not so much because they were ringers for the real thing but because they had ample flavor and appeal on their own. Eating them, I felt I was doing good without sacrificing all that much.

That’s an attractive calculus that’s steering some Subway customers to the Beyond Meatball Marinara sandwich and some White Castle visitors to an Impossible Slider. It will point the way toward a new Ben & Jerry’s nondairy frozen dessert called Colin Kaepernick’s Change the Whirled and toward a growing array of vegan seafood alternatives.

And it will tug me further and further from my darling hamburger. I don’t imagine that our juicy, saucy romance will ever end entirely. But a bit of the thrill is gone.