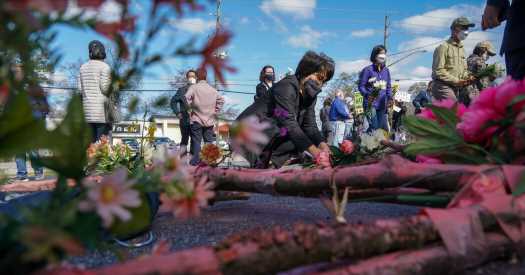 Dazzling b-roll footage on Georgia.org’s video “Korean investment in Georgia” features women backbending to thump samgomu drums and Ssireum wrestlers sparring in a cloud of sand. We see Koreans laughing over Korean BBQ and Koreans shopping in Korean supermarkets, plus picturesque mountains, beaches, and the verdant undulations of a golf course (because Koreans love golf). The three-minute reel, narrated entirely in Korean, intends to capture a Hanguk haven smack dab in the American South and concludes with an invitation: “Let us show you the harmony and success you will find here in Georgia, USA.”

I imagine no Korean woman watched this video and pictured herself working at a strip mall massage business in Atlanta’s “red light district.” Four of the six Asian women murdered on March 16 were Korean: Soon C. Park, Hyun Jung Grant, Suncha Kim, and Yong A. Yue. We may never know their interior worlds, their unspoken dreams, who and what they loved.

Georgia’s Asian oasis advertises a narrative familiar to countless immigrants: the promise of retaining one’s own cultural identity while seamlessly pursuing the American dream. The Atlanta shootings reveal a different narrative: how class complications are often left out of the bootstrap-lifting immigrant success story.

My mother started her American life changing bed pans at a nursing home. She learned English and, after stints in convenience stores and swap meets, she became an open-heart surgery nurse, eventually ascending income brackets. When we talked after the shootings, she seemed unrattled, which surprised me (I’d been on the brink of tears all morning). Stoicism is part of her generation’s ethos; South Korean boomers grew up in the wake of the Korean War and came of age during a period of rapid, transformative industrialization. Carving out new lives in America through painstaking work has rendered them unflappable. But I thought my mother and I would react the same way over the horrific events in Atlanta. Why didn’t we?

I moved to Georgia in 2017 for book research. I wanted to see firsthand how Koreans fit into the Southern landscape — a place discussed mostly within a white/Black binary. Growing up in California, I hadn’t been aware of the Korean presence in Georgia, but immigrant families like mine have been quietly inhabiting the Peach State for decades.

In the early 1980s, an increase of construction jobs diversified the predominantly white, outer suburban Atlanta area; Mexican and Central American migrant workers soon set roots alongside Asian immigrants. In 1985, when Georgia’s Department of Economic Development opened its first office in Seoul, the Korean community had only just begun to develop off Buford Highway — a miles-long corridor connecting metropolitan Atlanta to the southernmost edge of Gwinnett County (later dubbed by its own tourism bureau “Seoul of the South”).

Those looking to relocate from Tri-State and D.C. Korean neighborhoods could travel a straight shot south and west along I-85 to opt for an up-and-coming hamlet boasting warmer weather and cheaper rent. From 1990 to 2000, Georgia’s Korean community grew by a staggering 88.2 percent, faster than anywhere else in the country. Now, approximately 80 Korean companies — including Hyundai, Kia Motors, and LG — have established American headquarters across Georgia.

As with K-towns elsewhere, I’d noticed Korean immigrants in the Atlanta area seemed to rarely socialize beyond their ethnic circles. And they didn’t have to: there are Korean churches, Korean local newspapers, radio and television stations, and whole plazas chock-full of Korean travel agencies, hair salons, and bakeries, so that halmonis can go entire weeks without ever speaking English.

I wondered if the older Koreans I met in Georgia still cleaved to the classist beliefs endemic of the Joseon dynasty (1392 to 1910) — a time when aristocratic rule instilled a strict caste system and Confucian, patriarchal tenets subordinated women in and out of the home. I don’t believe that classism is an essential part of Korean identity. But, over the years, I’ve heard women from impoverished family backgrounds consistently referred to as “uneducated” or “lower class” — an inherited burden that follows them even to the States. Those who have drifted further from the promise of upward mobility, such as sex workers, can be cast from the cultural conversation altogether. By their own compatriots, they are sometimes considered subhuman, because they have failed to achieve what immigrants are sold whole cloth in America: the possibility of attaining a fresh start.

It is no coincidence that the Asian victims of recent hate crimes often belong to vulnerable populations: women and the elderly; three of the Korean massage workers fell into both these categories. While it is possible for women who don’t fit the “model minority” archetype to find empowerment through sex work, many find themselves locked into transactional, stigmatized roles; marginalized groups, especially the undocumented, are less likely to report assault, for fear of deportation or prostitution charges.

The long, fraught history of Asian female subjugation in the United States dates as far back as the 1860s, when Chinese girls and women were auctioned on the San Francisco wharf and sold into sex slavery or forced prostitution. Post-Korean War, many G.I. brides who immigrated to America found themselves, later in life, resorting to sex work as a means to survive.

Perhaps survival is also what catalyzes our intergenerational divide. The Oscar-nominated South Korean actress Youn Yuh-jung considered this rift when discussing “Minari.” The film (in which she co-stars) is set in 1980s rural Arkansas and centers on a Korean father’s pursuit of the American dream. In an interview with The Associated Press, Youn noticed how Korean-Americans experienced an intense outpouring of emotion when watching, or even discussing, “Minari.” “I don’t fully understand,” she said. “We came with a purpose — to live a better life. In the 1970s and ’80s, South Korea was ‘under the dictatorship’ during Park Chung-hee.” When Koreans emigrated to America, “we expected to be ‘treated’ (poorly) so there was no sorrow.” Asian-Americans were “born in the States without their own will … [they] think they are Americans but in the eyes of Americans, they don’t look American.”

I have spoken to friends about this unremitting identity crisis, ever negotiating where our parents’ immigrant narratives end and where our American ones begin. This is, and will continue to be, an ongoing struggle for those of us torn between cultures, balancing the reverence we hold for our immigrant parents and our desperate desire to be acknowledged apart from them.

Ultimately, what we must face is a different kind of reckoning. Our parents’ generation worked tirelessly to afford us the privilege of choice. We can choose to see humanity unhindered by their traumas and past. We can reject the patterns of oppression that have encumbered those who’ve come before us. And we can be rattled awake to what remains possible for this country and ourselves.

Jennifer Hope Choi (@missjenchoi) is a writer and editor.