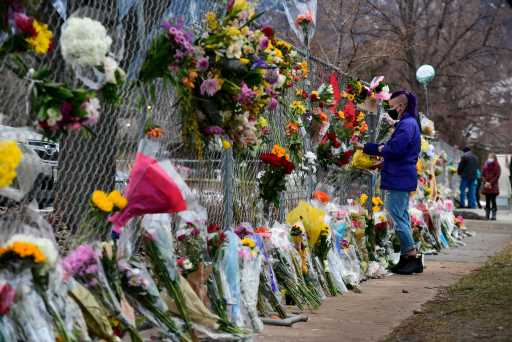 Each day brings about 8,000 new things (rough estimate) that demand the attention of The Denver Post’s politics team.

This week, The Spot is narrowing in on the main issues in front of lawmakers and leaders — gun laws, changes to policing and the top educators in the metro area — as well as calling your attention to things you may have missed.

To support the important journalism we do, become a Denver Post subscriber here.

Have a question about Colorado politics? Submit it here and it’ll go straight to The Denver Post politics team.

Colorado Senate Majority Leader Steve Fenberg says this could be the week his fellow Democrats lawmakers roll out their slate of legislation in response to the King Soopers shooting.

Well, it’s Thursday afternoon, more charges were just filed against the man who faces several already in the Boulder shooting, and the Capitol press corps hasn’t seen any of the new bills yet.

As previously reported, we have a good idea of what the package is likely to include: strengthening background checks to prevent people with violent misdemeanor convictions from purchasing guns; a beefed-up awareness campaign around 2019’s “red flag” law, which allows people to petition courts to seize guns from people who are dangers to themselves or others; new funding for mental health initiatives; and a repeal of the state law that prevents local governments from enacting their own gun laws above and beyond the state’s.

All of that would be on top of three other bills related to gun violence this session, two of which were signed into law this week. (Here’s a story on the third.)

Some policies are conspicuously absent from that list above, namely an extended waiting period for new gun purchases and a state ban on “assault-style” weapons. Fenberg has been clear that he doesn’t want to introduce a bill that won’t pass, so if you don’t see these more controversial policies debuting, you can be assured that the votes aren’t there.

This is a good reminder of the limits of Colorado’s blue wave. Democratic majorities do not guarantee the passage of big-ticket liberal priorities, because many of these Democrats — Gov. Jared Polis included — are still quite moderate. This is why the death penalty repeal took two years, why the paid family leave bill never passed the legislasture, why the eviction moratorium fizzled last year in the Senate.

It may well be the reason this forthcoming post-Boulder shooting gun bills package won’t go as far as it could.

Policing recommendations on the way for Denver, but Congress is stuck

Denver’s Reimagine Policing and Public Safety Task Force will cement more than 100 recommended changes for public safety next Thursday, a little over a week after Chauvin was found guilty in Minneapolis on murder and manslaughter charges.

The large task force — made up of more than 100 people — began meeting weekly in September, co-lead Robert Davis said. In January, the city’s Public Safety Director, Murphy Robinson, pulled all four law enforcement representatives out of the process, complaining the group hadn’t produced any results.

Recommendations are now on the way, Davis said — at least 114 of them that currently are being looked at by a group of the task force’s teenagers before the final approval.

The full list is expected out next month, around the anniversary of Floyd’s death.

Robinson had promised to consider the group’s recommendations to see what could be adopted and a spokesman for Mayor Michael Hancock echoed that pledge.

Hundreds of miles away in Washington, D.C, the only Black member of Congress in Colorado history watched the Chauvin jury’s verdicts with fellow Congressional Black Caucus members around a single laptop.

“Let’s also be clear that this must be the first step of many in true accountability and change,” Democratic U.S. Rep. Joe Neguse said in a statement a short time later. “The House of Representatives passed the George Floyd Justice in Policing Act as a much-needed and comprehensive first step to ensure justice and equality for all. The Senate must take this bill up — immediately.”

Just as mass shootings usher in a million news releases about gun laws, killings by police bring calls for changing the policing system. Both have an abysmal track record in Congress in recent years.

The Floyd bill last year and this year passed the House with very little Republican support, and a Republican policing reform bill died in the Senate last year because it had very little Democratic support.

Some conservatives worry about disincentivizing police work. Four hours after the Chauvin verdicts were read, Republican Rep. Lauren Boebert spoke at a telephone town hall about a recent road trip through her southwest Colorado district, during which she talked with sheriffs and police chiefs.

“We heard about the staffing issues police forces are having and how the demonization of police nationally is having a negative effect locally,” Boebert said. “Of course, there has been some local issues that have come up with law enforcement from the state legislature, but right now it’s a really difficult time to be a police officer in America.”

The suburbs • By John Aguilar

Dan Domenech, executive director of the American Association of School Administrators, told The Denver Post in November that the exodus of top school executives in 2020 was “without doubt due to the pandemic and the tremendous pressure that they’re working under.”

Now, the question is how these new leaders in education will guide their suburban districts out of the pandemic, which has wrought havoc on student learning and progress.

It won’t be easy, said Bret Miles, executive director of the Colorado Association of School Executives.

“I’m concerned about it through all of our levels. I think we are going to see more teacher retirements this year than typical,” Miles told The Post late last year. “We could see a real stress on the system of people ready to walk away.”

Forward this newsletter to your colleagues and encourage them to subscribe.