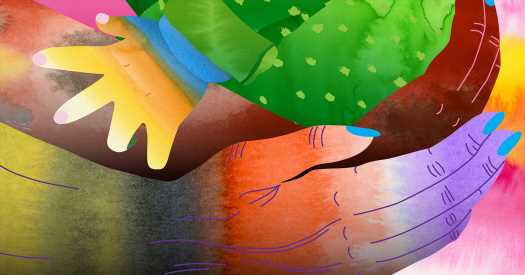 When I first became a mother a decade ago, I lived 282 miles from my mom, on a block full of clueless new parents like me — formerly competent adults who now found ourselves calling the fire department because our toddlers had locked us out again, or because we’d set our homes ablaze in a diligent effort to sterilize pacifiers on the stove. (We called this a “paci-fire.”)

I missed my mother both during these spectacular parenting fails and in calmer moments, like shoe shopping for baby feet so plump they were practically circular.

So five years into parenthood, pregnant with my third, I decided to move closer. It wasn’t all mimosas and antique shopping, of course. Mom was, by then, something of a flight risk, having amassed a telling collection of Viking River cruise brochures; lucky for me she didn’t bolt. A few times Mom implied that her volunteer gig as a costumed docent at a Revolutionary War-era history museum took precedence over her babysitting duties. Occasionally I did wonder: Had our life-changing move been an adulting tour de force, on my part, or the tantrum of a 30-something-year-old baby?

Then one day, at the very start of the pandemic, I called Mom not to borrow her Le Creuset again, but to sob that my husband was in the emergency room with Covid-19 symptoms, and that I (seven months pregnant with Baby No. 4) was left alone with three small children.

In the end, we couldn’t allow her to risk it. But our geographic proximity meant that she could sneak up on the porch in a commando-like manner to deposit dinner in a cooler. (Perinatal provisioning, anthropologists call this.) And once our family’s health had recovered, and the baby had arrived, Mom joined our pod while commuting daily from her own, far tidier abode, the only downside being the excessive mileage incurred on her leased retirement hot rod.

I’m well aware that many families haven’t been nearly so lucky; some have been forced to remain apart for a year or more; others have suffered unfathomable losses. Grandmas are finally now logging out of Zoom and re-entering three-dimensional space — it seems that every day I see more of them prancing past with strollers, thrilled to be within snuggling distance of their descendants once again — but the pandemic has been a sharp lesson in how much young mothers still need our own moms. Indeed, our mothers offer tremendous benefits to our mental health and maternal behavior in ways that emerging science increasingly underscores.

The human grand-maternal relationship is nearly unique in the natural world. Most mammalian females breed until the decrepit end of their days in order to maximize their number of surviving young, and a lifetime of wrangling newborns leaves little time for helping out their adult daughters (or sons). While some wild mother-daughter duos do stay on cordial terms, others become rivals, or even something approximating strangers.

Some biologists use the word “emancipation” to describe this permanent parting of ways — others prefer “desertion.” This cutting of the apron strings sometimes comes early: Certain seal moms spend as little as three days nursing their pups before ducking beneath the chilly ocean waves, never to return. Brown bear cubs get chased away the instant mom gets a new boyfriend.

Even fuzzy guinea pigs become stony toward their young once pregnant anew. “Mother Is Not Like Mother,” reads the dire title of one paper about pregnant guinea pig mothers’ nonresponsiveness to the calls of their prior crop of pups.

Human females are joined by only a handful of other animals, including a few long-lived whale species, that have a lengthy life phase when reproduction ends and the time arrives to pitch in with the grandkids. This all-hands (or all flippers) approach to ensuring your genetic legacy apparently pays dividends. A 2019 parsing of preindustrial Finland records suggested that the presence of a maternal grandma between the ages of 50 and 75 made a given grandchild 30 percent more likely to survive early childhood than a kid whose maternal grandmother was deceased. An analysis of 45 historical and contemporary populations showed that the presence of maternal grandmothers can increase child survival rates more even than the presence of biological dads. Orca grannies are similarly clutch, scientists reported recently in the Proceedings of the National Academy of Sciences, with postmenopausal females significantly increasing the chances of their grandcalves’ survival.

Perhaps these big grizzled gals are wise in the ways of Great White shark attacks and other deep-sea child care hacks. In the human case, grandmas most likely also protect their daughters’ physical and mental health, which may in turn help buoy a baby’s survival chances. (Orcas, on the other hand, seem more essential to their 30-something sons, a 2012 report in the journal Science found.)

Human maternal behavior is not just genetically predestined, but also highly responsive to a woman’s social environment. And while new human mothers around the world are renowned for our pluck and adaptability, maternal grandmothers are the rare global constant in our lives, two anthropologists, Brooke Scelza and Katie Hinde, argued in a fascinating 2019 paper in the journal Human Nature.

Indeed, in the United States, where single moms are heading up households in record numbers, Grandma — or Mamie, Yaya, Nanny, Me-maw or Foxy — may be a bigger deal than ever. That innocent-looking older lady, Drs. Scelza and Hinde contend, is a new mother’s secret weapon and often her most crucial source of “social support” — an emotional buffer with physiological heft.

Regardless of their socioeconomic position, women who feel socially supported are less stressed during pregnancies, according to a small but striking 2019 study by researchers at Columbia University and NewYork-Presbyterian, and severe psychological stress is linked to birth complications. Women with support from their own kin have lower rates of postpartum depression, possibly mediated by a more gradual late-pregnancy increase in a chemical called placental corticotropin-releasing hormone, a U.C.L.A. team found.

The particulars of supportive post-birth rituals vary across cultures, but maternal grandmas are almost always central. Chinese grandmas braise pigs’ feet with ginger, which may restore calcium to a woman’s depleted bones. Indonesian grandmas brew a special lactation soup. For her two daughters, my mom makes spaghetti and meatballs.

Of course, other relatives can play these roles, and even paid professional attendants can lift mothers’ mental health.

But all caregivers are not created equal. Research on Chinese women found that if somebody else — specifically, a mother-in-law — is braising the pigs’ feet or otherwise tending to postpartum needs during the “sitting the month” tradition of rest, the new mom is twice as likely to get depressed.

The absence of a maternal grandmother creates visceral stress, and a study of Puerto Rican women published in 2011, also by Dr. Scelza in Human Nature, showed that those on shaky terms with their nearby mothers and not relying on them for social support are prone to comparatively worse birth outcomes, with increased odds of lower-weight babies and infant death.

Meanwhile, women who reported having warm mothers when they were children may be more sensitive to their own future babies’ cries and other cues, a group of international researchers found. Neuroimaging suggested that these women had extra gray matter in certain areas of their brains, hinting that the primal mother-daughter relationship may be etched in the architecture of our maternal brains.

Perhaps this is why it is so common worldwide for moms to live near their own moms, especially in the early days of marriage. Even Americans, famous for our mobility, were found in 2015 to dwell on average about 18 miles from the maternal nest, with only about 20 percent more than a two-hour drive away.

College-educated American women, though, may stray farther afield, most often because careers and companionate marriages beckon, and maybe also because we tend to have kids when we are practically old enough to be grandmas ourselves.

For my little sister, the drive home is 417 miles. Spaghetti and meatballs don’t travel that well.

In the wake of the pandemic, with work-from-home here to stay and two tiny kids underfoot, she has begun sending me real estate listings within easy reach of my mom’s condo. It’s not a surprise: For even the boldest and most independent young mothers, the savviest path might lead back home.

Abigail Tucker is the author of “Mom Genes: Inside the New Science of Our Ancient Maternal Instinct.”

Tell us about your family’s experience.