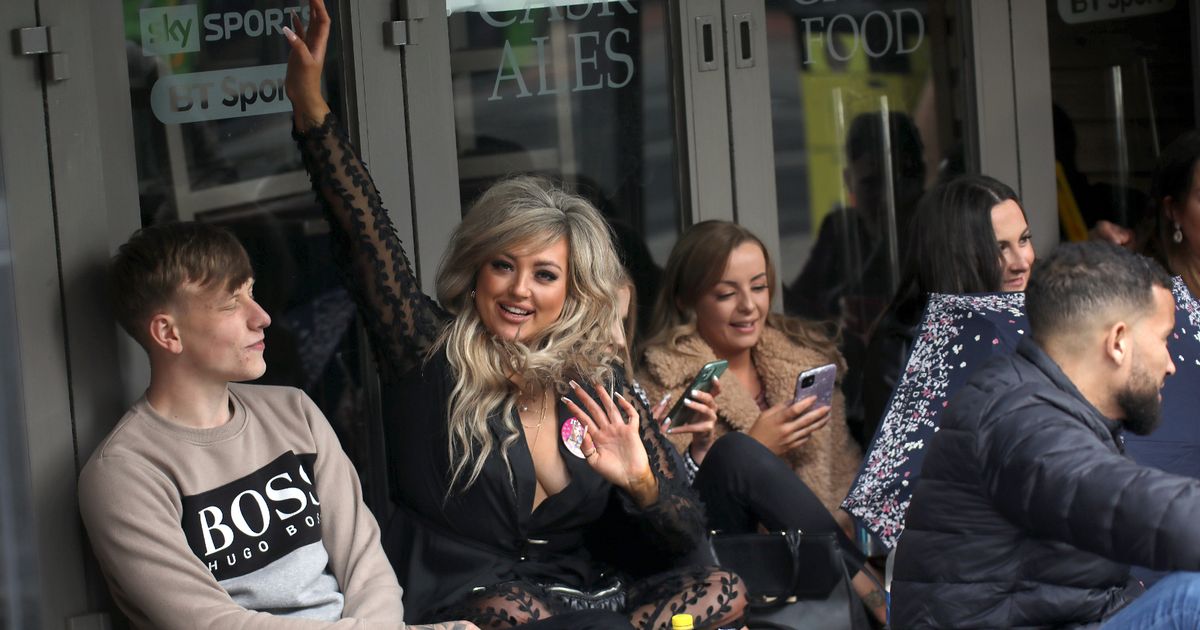 Thousands of Brits desperate for a night on the town flooded the streets of Leeds and Liverpool overnight to celebrate the May Bank Holiday.

It's the first long weekend since some coronavirus social distancing rules were relaxed on April 12, allowing pubs to serve punters outdoors and groups of friends to meet up again.

Revellers certainly weren't going to let this opportunity to celebrate pass them by, with photos showing crowded beer gardens and mayhem on the footpaths.

Nightclubs remain closed for now (apart from experimental pilot events), but partygoers didn't let that stop them from painting the town red.

Scores of women were seen tottering arm-in-arm with their pals.

Some wore face masks but the majority went without, braving the chilly night air in short skirts and high heels.

A few seemed to have lost their balance as they sat, lay or took a tumble in the street while pals rushed to their aid.

However they didn't seem too bothered, with pictures showing them in high spirits and full of good cheer.

One Leeds lass was even photographed kicking her shoe off in a fit of jubilation, and was also seen attending to a friend who had fallen.

Groups of friends were seen huddled in the doorway of a pub in Leeds.

Some were sneakily mixing their own drinks on the footpath as they patiently waited for the doors to open.

A staggering 5,000 people were allowed to attend the concert headlined by indie band Blossoms and were not required to wear a mask or socially distance during the event.

However ticket-holders did have to take a Lateral Flow Test at a community testing site 24 hours beforehand, needing to produce a negative Covid-19 result before they could go to the gig.

They'll all have to take another test five days after the event as part of research done by the national Events Research Programme (ERP).

The ERP will collect key scientific data from the two nights, looking into how events for a range of audiences could be permitted to safely reopen on June 21 as part of the government's roadmap out of lockdown.

Other acts on the line-up included the Lathums and Liverpool singer-songwriter Zuzu.

The ERP had also hosted a rave at the city's Bramley Moore Dock warehouse on Friday, the first event of its kind.

Photos from the scene show excited Brits partying up a storm indoors without a mask in sight.

Elsewhere in Liverpool another experimental pilot event was going on, with scores of revellers lined up outside Circus night club.

There are calls to accelerate the easing of lockdown even further as cases continue to fall across the nation.

After a brutal winter, Covid infection rates have now returned to what they were in late summer with approximately one in every 1,000 Brits currently infected.

In the week to 24 April, infections fell in all four nations of the UK and were 20 times lower than they had been in January. The number of Covid cases fell to 1,671 from last Sunday's 1,712 while deaths increased to 14, a rise of just three compared to the 11 recorded last Sunday.

Almost 50 million jabs have been given out in the UK, with more than half the population now having received at least one vaccine.

There will be another significant increase in freedom on May 17, with cinemas and museums to finally reopen.

Pubs, cafes and restaurants will also be able to serve customers indoors.

However Foreign Secretary Dominic Raab has cautioned some coronavirus protections may need to remain in place beyond June 21, the final date in the government's roadmap out of lockdown.

He said this could include mandatory face masks and social distancing in some settings such as on public transport.