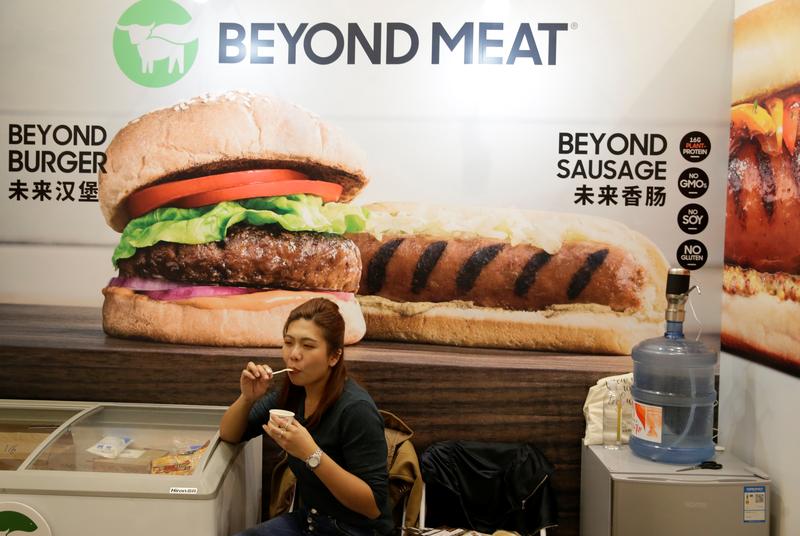 FILE PHOTO: A woman sits next to a poster at the booth of plant-based food company Beyond Meat at VeggieWorld fair in Beijing, China November 8, 2019. REUTERS/Jason Lee

Shares of the California-based company fell nearly 7% in extended trading.

The company, which sells faux meat in over 100,000 outlets worldwide, last year benefited from consumers stockpiling their freezers with bulk packages of its “burgers” during stay-at-home orders across the United States.

However, sales to restaurants took a hit as many closed. Chief Executive Officer Ethan Brown said during a call with analysts that he was seeing a “slow thaw” of that trend.

Even so, Beyond Meat expects the recovery in its food service business to lag the broader restaurant sector because it sells in many places where capacity is recovering more slowly, including sports venues.

Competition is rising among plant-based protein makers. In 2020, U.S. plant-based retail sales reached $7 billion, up 27% year on year, according to the Good Food Institute and the Plant-Based Foods Association (PBFA).

Impossible Foods Inc, Beyond Meat’s biggest rival, is preparing for a public listing which could value the company at around $10 billion or more, Reuters reported in April.

Brown said Beyond Meat’s “main competitor” was discounting two-thirds of its sales and said he was “not going to react and get into some sort of discounting war with them.”

Beyond Meat expects second-quarter revenue in the range of $135 million to $150 million, a rise of 19% to 32%. Analysts had forecast revenue of $142.8 million, according to IBES data from Refinitiv.