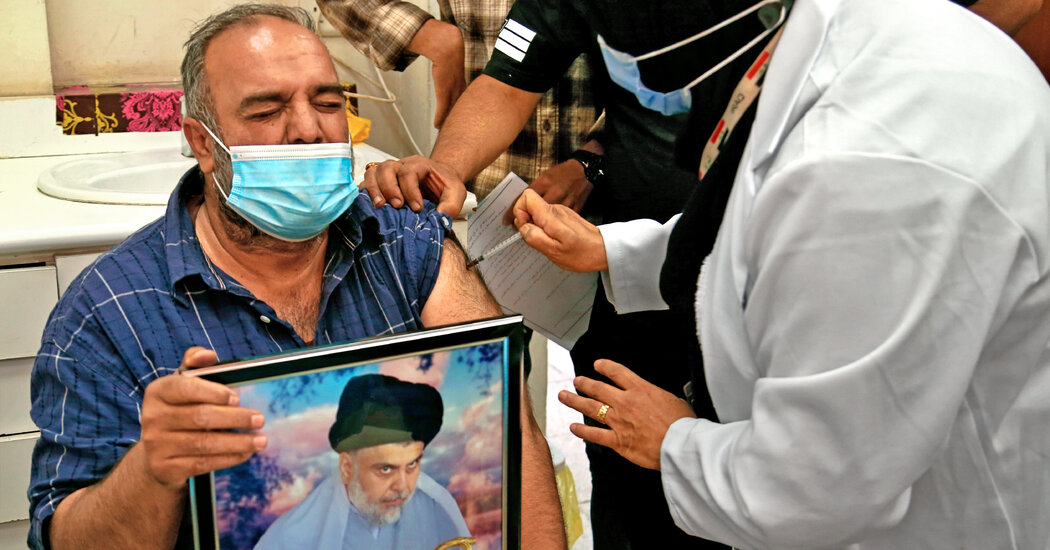 When Iraqi film stars and political leaders posted videos of themselves getting Covid-19 vaccines in an effort to encourage inoculations, most Iraqis ignored them. But officials say that the Shiite cleric Moktada al-Sadr’s decision to bare his upper arm for a shot last week has persuaded thousands to follow his example.

Iraq received its first coronavirus vaccine shipment in March, but Iraqis wary of any government initiative have been reluctant to sign up. Just over 400,000 people have been vaccinated — about 1 percent of the country’s population of roughly 40 million. Iraq has received about 600,000 vaccine doses.

Mr. Sadr, who commands millions of followers, was shown on video from the city of Najaf at a vaccination clinic, wearing a surgical mask and his black turban. He rolled down the right sleeve of his robe and undershirt to bare his upper arm for the jab.

Health officials said the video had encouraged thousands of people to go to vaccination centers, many of them in southern Iraq, where Mr. Sadr has strong support. In Najaf, a few hundred vaccinations a day were being administered throughout the province before this week. That number rose to almost 2,000 shots on Monday, and the province started running out of doses on Tuesday.

Some who showed up at vaccination clinics in the Sadr City neighborhood of Baghdad held framed photos of the cleric.

Iraq has recorded more than one million coronavirus cases and 15,640 deaths. Many Iraqis have avoided the vaccines amid widespread and unproven rumors that they could cause birth defects or sterility. Iraqis have little faith in government institutions, which have been weakened by years of corruption and mismanagement.

Many underequipped hospitals have also been overcrowded during the pandemic.

At a Baghdad hospital last month, a fire sparked by an oxygen canister that exploded swept through an isolation ward with no smoke detectors and no functioning sprinkler system. A health ministry official said the death toll had since risen to more than 100.

To try to stem the rise in coronavirus cases, Iraq’s government is imposing a 10-day lockdown starting next week as the holy month of Ramadan ends. Malls, shops and restaurants will be closed, and public gatherings banned.

The government has also directed government institutions to restrict access only to those who can show a vaccination card or a negative coronavirus test.