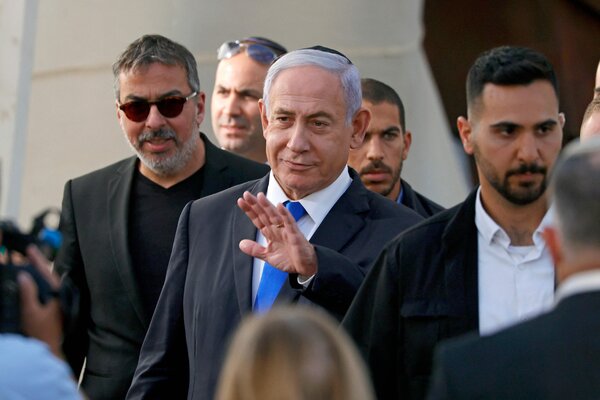 The coalition deal that could topple Netanyahu

Israel is moving toward a government coalition deal that could sideline Benjamin Netanyahu, the country’s longest-serving prime minister.

An ultranationalist power-broker, Naftali Bennett, said on Sunday that his political party would work with seven others to build a winning coalition, including both leftist and far-right members. Netanyahu fired back, calling the proposed coalition “a government of capitulation.”

The prime minister’s post would rotate between Bennett, a champion of the religious right who rejects the concept of a sovereign Palestinian state, and Yair Lapid, a voice of secular centrists.

The coalition government would also rely on the support of a small Arab Islamist party, Raam, which has roots in the same religious stream as Hamas, the militant group that controls the Gaza Strip. Raam is not likely to play a formal role in the coalition, but it is expected to support the new government at the Knesset confidence vote.

Context: Supporters hope the proposed coalition can break the deadlock that has stymied government action in Israel for more than two years. Leaders of the proposed coalition have indicated that they plan to focus first on infrastructure and economic policy instead of divisive issues like those related to the Israeli-Palestinian conflict.

Scenes from Israel: When a rocket from Hamas struck an Israeli apartment building, killing a resident, Palestinian laborers from the West Bank employed by Israeli contractors cleaned up the mess. “That’s life,” said one worker. “Nothing changes.”

The first British tourists to Lisbon since the country was “green-listed” for quarantine-free travel were elated by the thrill of escape — even as stringent mask rules and curfews reminded them this would not be an unfettered escape.

Scenic Portugal has long been a favorite tourist destination of British travelers, though they now have few alternatives: Earlier in May, Britain included Portugal on its “green list” of just 12 countries and territories that residents could travel to without quarantining upon return, many of which are not accepting tourists even as coronavirus restrictions are easing in some places.

Details: Tourists must complete paperwork and submit a negative P.C.R. test before departing for Portugal. They must then take another test within 72 hours of their return flight, and prove they have booked a third test to be taken in Britain, altogether adding up to hundreds of dollars per person.

Japan has extended a state of emergency in Tokyo and eight other prefectures until at least June 20, barely one month before the Olympics are scheduled to begin.

Nepal is now considering declaring a health emergency as the virus rampages there virtually unchecked.

With new attention on the origins of the coronavirus, U.S. officials called on China to provide greater transparency and speed inquiries into whether the devastating pandemic began with a leak from a lab.

For 134 years, Insein Prison — pronounced “insane” — has stood as a monument to brutality and authoritarian rule in Myanmar. British colonizers had built it to subjugate the population, and the military dictatorship that ruled from 1962 to 2011 used it to torture and suppress political prisoners.

Now, with the military back in control after a Feb. 1 coup, the aging building has become a central part of the crackdown against the pro-democracy movement. Hundreds of journalists, elected leaders and protesters have been crammed into the overcrowded structure.

Political prisoners told The Times that, under the former dictatorship, they were frequently beaten and sometimes burned, given electric shocks, forced to crawl across jagged rocks and locked in kennels intended for dogs.

Journalists: In March, the authorities arrested Nathan Maung, an American citizen, and Hanthar Nyein, co-founders of the online news site Kamayut Media. Another American journalist, Danny Fenster, the managing editor of Frontier Myanmar, was arrested last Monday at the Yangon airport as he prepared to leave the country and was taken to the prison.

Prime Minister Boris Johnson of Britain and Carrie Symonds were married in a stealth ceremony at Westminster Cathedral in London on Saturday.

Iran will try a detained French citizen on charges including espionage, a crime that can carry the death penalty.

Last year, the Medici Chapel in Florence embarked on a secret experiment to use grime-eating bacteria on Michelangelo’s masterpiece marbles. It worked.

A malnourished and often-chained 6-year-old who lived in a tent camp for displaced Syrians choked to death while eating. The case has drawn rare attention to the suffering of millions of children living in camps dotted across Syria’s north.

The French Open began yesterday, and Naomi Osaka prepared for a challenge.

An Indigenous community in Canada said it had evidence that 215 children were buried in a mass grave on the grounds of a school where they were forcibly assimilated.

Taiwan’s worst drought in more than half a century has deepened in recent weeks, nearly draining its major reservoirs and contributing to two severe electricity blackouts.

For half a year, mice have plagued Australia’s eastern grain belt, leaving economic and psychological scars.

James Matthew Bryant, a fugitive from the New Zealand authorities, chartered a helicopter to turn himself in after weeks on the run, including eight days spent doing yoga in a hut in the middle of the forest.

They deliver a brutal brand of justice: Thieves caught in the areas the gangs control are shot in the hand. Domestic abusers get one warning; repeat offenders are shot. And gang members who try to leave the underworld are hunted down as traitors.

A celebration of architecture

Twice delayed by the pandemic, the Venice Architecture Biennale is finally underway. The theme, “How Will We Live Together?” turned out to be prescient. Many of the answers look back at ways that countries have built to weather earlier challenges.

Some of the contributions honor innovative solutions to earlier housing challenges, with an eye toward the issues of climate change. The U.S. pavilion recalls the timber-frame houses that were built by many Americans as they moved West, while the Finnish pavilion pays tribute to the prefabricated wood homes built to address an internal refugee crisis during World War II.

Other exhibitions celebrate togetherness. The Philippines’ pavilion is inspired by the lightweight nipa hut, which villagers could carry on their shoulders, a design rooted in bayanihan, the idea of communal support. Simón Vélez, a Colombian architect, built a pop-up Majlis, or communal gathering place, as the cornerstone of a temporary nomadic village.

“The biennale used to be the place where Europe showcased what’s good and what’s bad; it taught the world,” Hashim Sarkis, the show’s curator, said. “Now it’s the other way around.”

Serve this herby polenta with corn, eggs and feta alongside a zesty green salad.

David Diop, an International Booker Prize finalist for his novel “At Night All Blood Is Black,” is among the writers whose work is helping France face its history with Africa.

These five new horror movies will keep you entertained (and maybe up all night).

P.S. Carl Zimmer, one of our science reporters, talked to WNYC about the different coronavirus origin theories circulating within the scientific community.

There’s no new episode of “The Daily.” Instead, listen to the new Times podcast “Day X,” about an alleged far-right plot to bring down the German government.

Whet Moser wrote today’s Arts and Ideas section. You can reach Natasha and the team at briefing@nytimes.com.