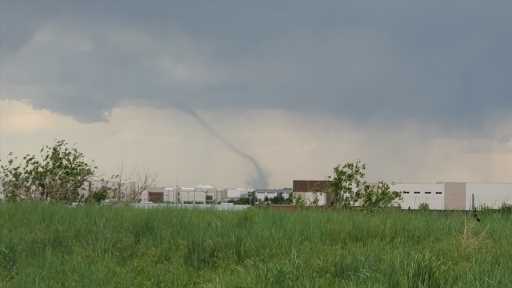 A tornado touched down southeast of Mead on Monday afternoon, according to the National Weather Service.

The funnel cloud was spotted at about 5:24 p.m., according to the National Weather Service, and was moving northeast at 10 mph. The tornado started about a mile or two north of Firestone, said meteorologist David Barjenbruch, and traveled about three miles northwest of Platteville.

The tornado had lifted and was no longer on the ground by about 5:50 p.m., Barjenbruch said.

“It has temporarily lifted, and we hope it stays up, but there is still a tornado warning until 6 p.m.,” he said.

Spokeswoman Jennifer Finch said emergency crews are trying to assess any damage, but that at least one home was damaged by a fire ignited by a downed power line.

The National Weather Service, in a tweet, said power poles and lines were knocked down near Highway 66 and Weld County Road 21.

Barjenbruch said it was not immediately clear how strong the tornado was. The National Weather Service at Boulder will work to determine that in the coming days.

“But it is Colorado, and you can never rule anything out on any given day,” he said.

Areas that were impacted include Firestone, Milliken, Mead, Platteville and Gilcrest.

This is a developing story.