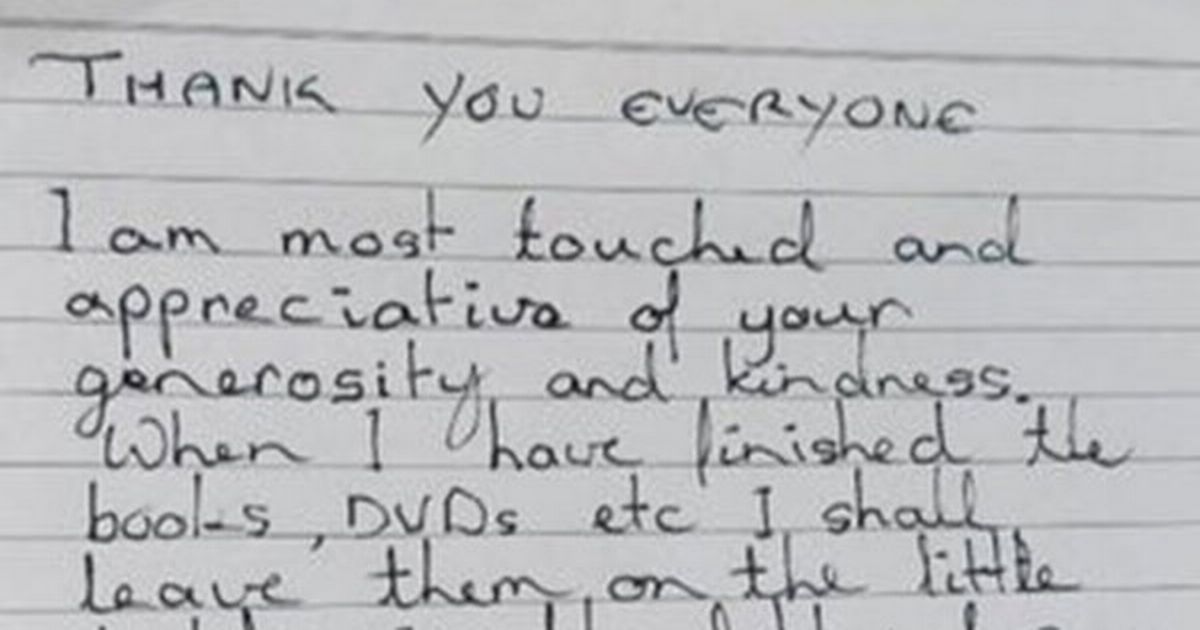 An elderly woman has praised neighbours for "saving an old bird's sanity" when they helped her beat her boredom with donations.

The 72-year-old woman posted a handwritten note to ask neighbours for books and DVDs and pinned it up in a communal area of their building.

She told how she lives alone and "is going around the twist 'with nothing to read".

And when her neighbours rallied round she was so overwhelmed with their response from her appeal she penned a touching note to thank them.

It reads: "Thank you, everyone. I am most touched and appreciative of your kindness. When I have finished the books, DVDs etc I shall leave them on the little table in the lobby for everyone to enjoy. It may take a while." She signed off the note with the honest and witty quip: "PS You have saved an old birds sanity."

One of the residents in the block shared the post to social media posting: "Yesterday an elderly woman in my block taped the first note to the lobby door, so my neighbours and I dropped off some books/DVDs for her. Today she stuck up a second note :)."

The tweet which was posted in April last year has since attracted 471.9k likes and 68.5k re-tweets. Whilst it's been a rough year due to the Covid pandemic with not being able to see family and friends like we used to, the pandemic has been found to have brought neighbours closer together.

More than half (52%) of Brits typically have a good relationship with their neighbours, and one in six claim they’ve grown closer to them during lockdown, according to a survey by Confused.com.

During this time, a lot of people have been house-bound, relying on others to carry out essential errands for them, from picking up prescriptions to carrying out a weekly shop.