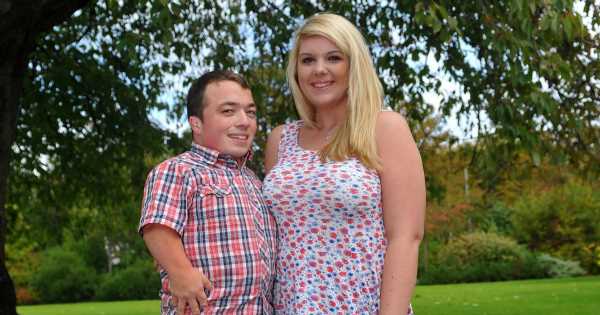 Generally married couples see eye to eye on most issues, but James and Chloe Lusted have a good reason not to.

James and Chloe have just been confirmed by Guinness World Records as record holders for the biggest difference in heights for a married couple, with almost two feet of difference between them.

The precise category is Greatest height differential of a married couple (different sexes/ taller woman) and with Chloe measuring just over 5’ 5” and James coming in at a comparatively modest 3’ 7” the difference is striking.

James, 33, who has rare type of Dwarfism known as Diastrophic Dysplasia, is an actor and presenter while his wife Chloe, 27, works as a teacher.

The pair first met at a local pub in 2012, having been introduced by mutual friends, shortly after James had carried the Olympic torch through their home town.

Chloe, who was a student living in Cardiff at the time, was initially apprehensive about a relationship due to the distance between them and, admittedly, due to reservations about how they would be treated.

However in December 2013, James and Chloe confirmed their status as a couple, and seven months on, James asked Chloe to marry him while the couple took a trip to a lake in north Wales – and of course she said yes!

James and Chloe were married in 2016, and have since had a daughter named Olivia, who is now two years old.

Chloe admitted that in the past she would usually have said she was attracted to taller men- however this all changed when she met James: “There is someone out there for everyone, and it perhaps won’t be who you imagine…

"I hope that our love story teaches others that you can never judge a book by its cover and everyone has their own personal story underneath what they look like.”

James added that when he was growing up, he initially doubted whether he would ever get married, but says now that their relationship proves there is someone out there for everyone.

He also says: “I came to a point where I had to say to myself that dwarfism doesn’t own me, I own dwarfism. I just wanted to be the same as everyone else and I just wanted to live my life in a big way, in a little body”.

The tallest bloke in the world is currently Sultan Kösen, at a whopping 8 foot three, while Indian actress Jyoti Kisange Amge is the world’s shortest woman at a shade over two feet tall.