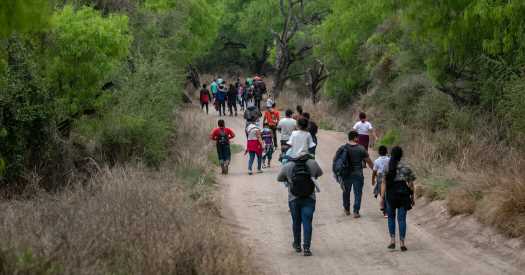 WASHINGTON — The Biden administration is in the later stages of planning how to phase out a Trump-era public health rule that has allowed border agents to rapidly turn away most migrants who have arrived at the southern border during the pandemic, according to two administration officials.

It is possible that, in the coming weeks, border officials could start allowing migrant families back into the country, with an eye toward lifting the rule for single adults this summer.

The plan, while still not final, is sure to ​complicate an already thorny issue for President Biden and Vice President Kamala Harris, who is visiting the border on Friday, as Republicans accuse the administration of being slow to address what they describe as an unrelenting surge of migrants trying to enter the country. Lifting the rule will only exacerbate that.

Since the beginning of the pandemic, border agents have turned away migrants nearly 850,000 times under the public health rule, known as Title 42. Migrant families have been turned away more than 80,000 times since the rule was put in place in March 2020, according to government data.

The White House has deflected questions about how much longer the rule will remain in place.

Mr. Biden, who has promised a more humane approach to immigration enforcement, decided not to continue the Trump administration’s policy of expelling children who arrived alone at the border. Single adults and many families, however, have continued to be turned away because of the public health rule, whose stated purpose is to prevent the coronavirus from spreading at points of entry or Border Patrol stations.

Still, some migrant families have been allowed into the United States because Mexico or their home countries refuse to take them back.

Plans to lift the rule have been under discussion for weeks, but there appears to be a fresh sense of urgency; officials familiar with the evolving plan shared details with The New York Times on the condition of anonymity because they were not authorized to discuss it. Axios earlier reported some of the details.

For migrant families, the officials said, one idea under consideration is to put those seeking asylum into one of Immigration and Customs Enforcement’s alternatives to detention. That includes having them wear ankle bracelets as their request makes its way through the immigration system, a process that can take years because of a chronic backlog of cases. The administration has already been doing this for other migrant families this year.

The administration is considering placing families who do not make asylum claims in the queue for expedited removal, a process that allows immigration officers to deport people without a hearing, a lawyer or a right of appeal in some cases.