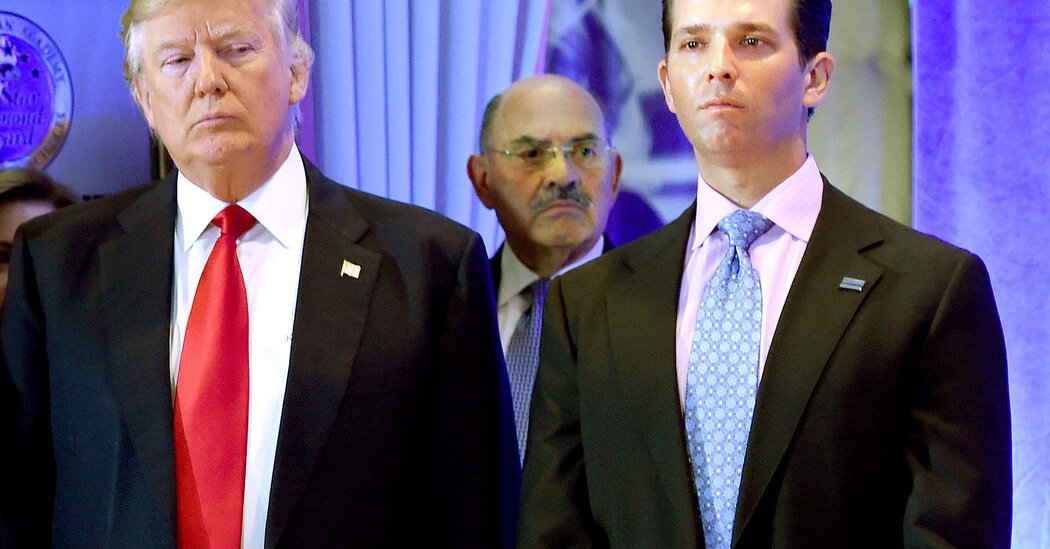 Donald Trump’s company has long engaged in aggressive accounting maneuvers that involve classifying many of its executives’ personal expenses as business expenses.

Trump’s residences are considered part of the business. So are his aircraft. More than $70,000 to pay for his haircuts has fallen into the same category, as has almost $100,000 paid to a hair and makeup artist of Ivanka Trump. The company even classified a suburban New York estate that Eric Trump once called “a retreat for the Trump family” as an investment property, as a Times investigation disclosed last year.

These practices have allowed the Trumps to reduce their tax bills because business expenses are not subject to the same taxes that personal income is. Some experts say that the pattern amounts to tax evasion, while Trump has long insisted that the company has done nothing wrong.

Yesterday, the Manhattan district attorney said that the company, known as the Trump Organization, had crossed the line into illegality on dozens of occasions and charged it with a fraud scheme stretching over 16 years. The charges do not involve the Trump family’s expenses like the residences and haircuts; they are focused instead on the company’s longtime chief financial officer, Allen Weisselberg, who was also personally charged.

But the common theme — aggressively treating personal expenses as business expenses, sometimes legally and perhaps sometimes not — is clear.

It remains uncertain whether Trump or his children will ever face charges, but it seems possible. “These investigations work in stages, and there’s no indication that the investigation is winding down,” Ben Protess, who’s been covering the investigation, told us. “Once you indict the C.F.O. and the company, that pretty much only leaves Donald Trump himself.”

Although many legal scholars believe that a sitting president cannot be charged with a crime, a former president clearly can be.

A central question is whether Weisselberg — who’s 73 and began working as a bookkeeper for Fred Trump, Donald’s father, a half-century ago — will remain loyal to the family, as he has so far. If he instead chooses to cooperate with investigators, it could expose the Trump family to substantial legal risk.

Politically, there is a big difference between the case ending with yesterday’s charges and Trump himself facing charges. Evidence of Trump’s questionable business practices — including using his presidency to help his company — has done little to change the views of his political supporters. Fighting criminal charges, however, could require much of Trump’s time and attention and complicate any potential presidential campaign in 2024.

“On the other hand,” our colleague Maggie Haberman said, “Trump allies say he will be reluctant to say he is not seeking office again until the investigation is over. So he appears locked on his current course for the foreseeable future.”

In court yesterday, Carey Dunne, a senior member of the district attorney’s office, described the Trump Organization’s behavior as “a sweeping and audacious illegal payments scheme.” The indictment argues that the company gave Weisselberg $1.7 million in perks that it recorded as compensation in an internal spreadsheet but kept off its books to avoid taxes. Weisselberg also failed to mention some of the payments in his own tax filings. (Here is a more detailed Times explainer of the charges.)

Weisselberg pleaded not guilty, and his lawyers said he would fight the charges. Lawyers for the Trump Organization released a statement calling the charges politically motivated: “This case signals that it is now open season for local prosecutors to target federal political opponents and adversaries.”

Among the charges in the indictment:

The Trump Organization spent almost $1.2 million in untaxed income to allow Weisselberg and his wife to live in an apartment on the Hudson River. While living there, Weisselberg also concealed the fact that he was a New York City resident, allowing him to evade city taxes.

The company paid for two of Weisselberg’s relatives to attend Columbia Prep, a private school in Manhattan, at a cost of $359,000. Trump personally signed some of the checks.

The company illegally paid for two Mercedes-Benzes for Weisselberg and his wife, as well as beds, TVs and carpeting installation for his and his children’s homes.

The company gave — and hid — cash to Weisselberg that he used as holiday tips.

For more: The charges may hurt Trump’s finances. Indictments can jeopardize relationships with banks, and Trump has large outstanding loans. 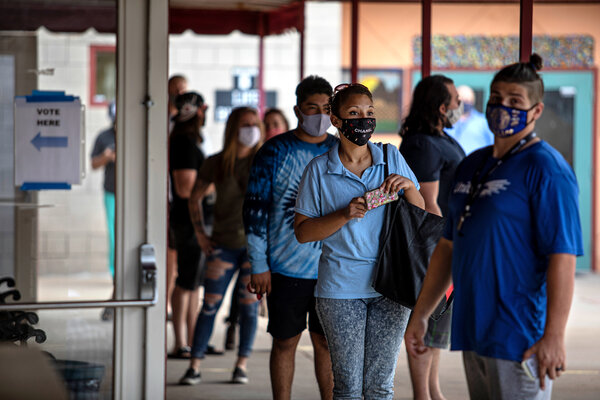 In a 6-to-3 vote along ideological lines, the Supreme Court upheld voting restrictions in Arizona, further weakening the Voting Rights Act of 1965.

The ruling will make it easier for states to pass future restrictions, creating a high legal bar for challenges.

In a separate ruling, the court said charities were not obligated to reveal the identities of their major donors.

It was the last day of the court’s term, the traditional day for justices’ retirement announcements. Stephen Breyer, 82, did not retire, disappointing many Democrats.

Here’s a recap of the term’s biggest cases.

Speaker Nancy Pelosi chose Liz Cheney, a Republican and a Trump critic, for one of the eight spots on the House select committee investigating the Capitol riot.

The Justice Department paused federal executions, a year after the Trump administration resumed them.

The House passed a transportation and drinking water bill, effectively its opening offer on infrastructure talks.

J.D. Vance, the author of “Hillbilly Elegy,” will run for the Senate in Ohio as a Republican.

In 2018, an inspector said the collapsed tower near Miami was in “good shape,” despite an engineer’s concerns. The inspector is facing scrutiny.

The Arctic’s “last ice area,” a potential refuge for polar bears and other wildlife, appears less resilient against climate change than scientists thought.

The star sprinter Sha’Carri Richardson, 21, tested positive for marijuana, a result that may bar her from the Olympics.

Times Opinion has started a series exploring ideas to revitalize and renew the American experiment. Here are the first three articles:

The U.S. used to be a country of invention and change. Today, our politics are sclerotic and our dreams are small, writes Daniel Immerwahr. What happened?

“Where the American dream used to be owning a home with a white picket fence, now it is getting out of debt,” Astra Taylor argues.

And Jonathan Holloway argues for a mandatory national service program.

Profile: Joe Rogan has one of the biggest platforms in media. His fans see him as an outsider.

Devil wears Prada: Fashion magazine editors once had their own “fiefdoms.” That’s over.

A Times classic: How to take the perfect fireworks photo.

Lives Lived: As a teenager in Bulgaria, Boryana Straubel was a self-described math nerd. After immigrating to the U.S., she became a star executive at Tesla and founded a jewelry company that uses recycled metals. Straubel died at 38.

The quarterfinals of the Euro 2020 soccer tournament are today and tomorrow. (The event, like the Toyko Olympics, was postponed but kept its 2020 name.)

Winning is a big deal in Europe: Only 10 countries have done so since the first tournament, in 1960, with Germany, Spain and France having won more than once.

This year, the monthlong event is scattered across the continent with different cities hosting games. Switzerland, Spain, Belgium, Italy, the Czech Republic, Denmark, Ukraine and England are still in the running.

Predicting a winner is tough. Belgium has a golden generation, but its defense is aging. Spain passes the ball well, although sometimes, maybe, too much. England, seeking its first title, seems to be gathering strength, beating Germany in the knockout stages of a major tournament for the first time in 55 years. And many of the initial favorites — including Portugal, France and the Netherlands — are already eliminated.

Lastly, there’s a mascot. His name … is Skillzy.

Layered with whipped cream, raspberry purée and saltines, this easy cake is great for July 4.

In the 1950s, this Fire Island hamlet was a refuge for gay men and lesbians. See photos from the era in a new exhibition.

Is “cloud gaming” — which would allow people to play modern video games without an expensive console or computer — the future?

Here are the best movies and TV shows to stream this month.

See how you do compared with other Times readers in this week’s News Quiz.

The pangram from yesterday’s Spelling Bee was uninvited. Here is today’s puzzle — or you can play online.

If you’re in the mood to play more, find all our games here.

Thanks for spending part of your morning with The Times. We are off on Monday for the holiday. See you Tuesday. — David

P.S. If you’re in New York, The Times has a newsletter, Summer in the City, filled with activities for both kids and adults. Read it, or sign up.

“The Daily” is about the fight over critical race theory in schools. On the latest episode of “The Argument,” a debate over who has power in American society.

Tom Wright-Piersanti and Sanam Yar contributed to The Morning. You can reach the team at themorning@nytimes.com.

Sign up here to get this newsletter in your inbox.