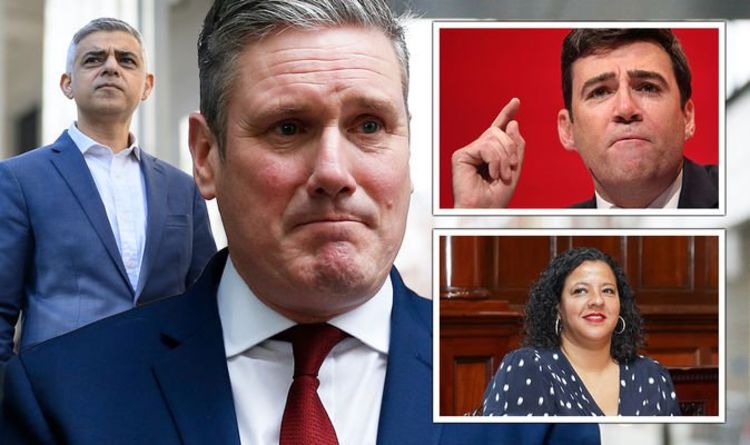 Labour leader Sir Keir Starmer has stumbled through the UK’s pandemic-fuelled political minefield in 2021, flailing as he tries to drag the party to the centre. Jeremy Corbyn’s loss in 2019 sparked panicked efforts to reform the party into an “electable” entity, but polling shows his efforts have failed to convince both Britons and his own members. The solution, according to a recent report, is to assemble a team of elite Labour figureheads.

Labour in Communications, which collects a network of progressive comms and PR experts, penned the “Fit for the Future” report.

The document recommends ways in which the party can improve its image and strive towards that electable ideal.

One of the many recommendations made includes the formation of a “political cabinet”.

The group states Labour has an issue with inexperienced shadow cabinet members who have never held a role in government.

The last Labour administration ended in 2010, and most former ministers have moved on to new pastures.

As such, Labour in Comms said Sir Keir should take advantage of its best-loved representatives holding power and trim down inexperienced voices in the shadow cabinet.

The new “political cabinet” would consist of figures boasting mainstream political support who could guide Labour to success.

The report outlined seven Labour heavyweights who should have a seat at the table alongside its leader.

Mr Drakeford is the only Labour Party figure currently leading a government in the UK.

He assumed office as the Welsh First Minister in 2018 and has retained much of his popularity.

The Welsh Labour leader has provided a stark contrast to Boris Johnson amid the Covid pandemic, with a more cautious approach to lockdown.

Researchers have found his leadership during the pandemic helped Welsh locals understand the rules better than Mr Johnson did in England.

Andy Burnham has gained a level of celebrity during the pandemic as Manchester Mayor.

He famously stood up to Westminster last year as ministers threatened to force the city into lockdown without what he believed was an adequate support package.

Mr Burnham was reelected this year after earning the support of 67 percent of Mancunians.

He is also one of the few Labour figureheads with real-life cabinet experience, having served under Gordon Brown as a health minister, Chief Secretary to the Treasury, Health Secretary and eventually Secretary of State for Culture, Media and Sport.

Mr Khan became Mayor of London in 2016 when he shifted to the position from Parliament.

He will serve as the capital’s mayor until at least 2024, after winning 55.2 percent of the vote.

During his tenure, he famously challenged US President Donald Trump and was once featured on the Time 100 list of the world’s most influential people.

Much like Mr Burnham, he has former cabinet experience under Gordon Brown as Transport Secretary.

Ms Brabin is another MP-turned-mayor, having made the jump during this year’s elections.

The popular MP for Batley and Spen and former actress became the Mayor of Yorkshire in May.

Her departure initiated the Batley and Spen by-election, which saw Labour retain the constituency by a slim margin.

She is the first-ever woman to become a Metro Mayor in the UK.

He assumed the position in 2018 after serving as MP for Barnsley Central.

The mayor is one of few political leaders in the UK with military experience.

He joined the Parachute Regiment and served during Tony Blair’s government between 1997 and 2011.

Following a second-round vote, she captured the support of 59.2 percent of Liverpudlians.

She broke boundaries as the first Black female mayor to lead a major UK city.

Under her leadership, Ms Anderson has promised to correct “serious failings” in Liverpool’s council identified by the Caller Report.

The working-class local Liverpudlian worked as a bricklayer after leaving school and later served as an MP for Liverpool Walton between 2010 and 2017.

He has famously served as an advocate seeking justice for the Hillsborough disaster of 1989.

His campaigns led to the release of government papers relating to the disaster, achieving an apology from Prime Minister David Cameron.