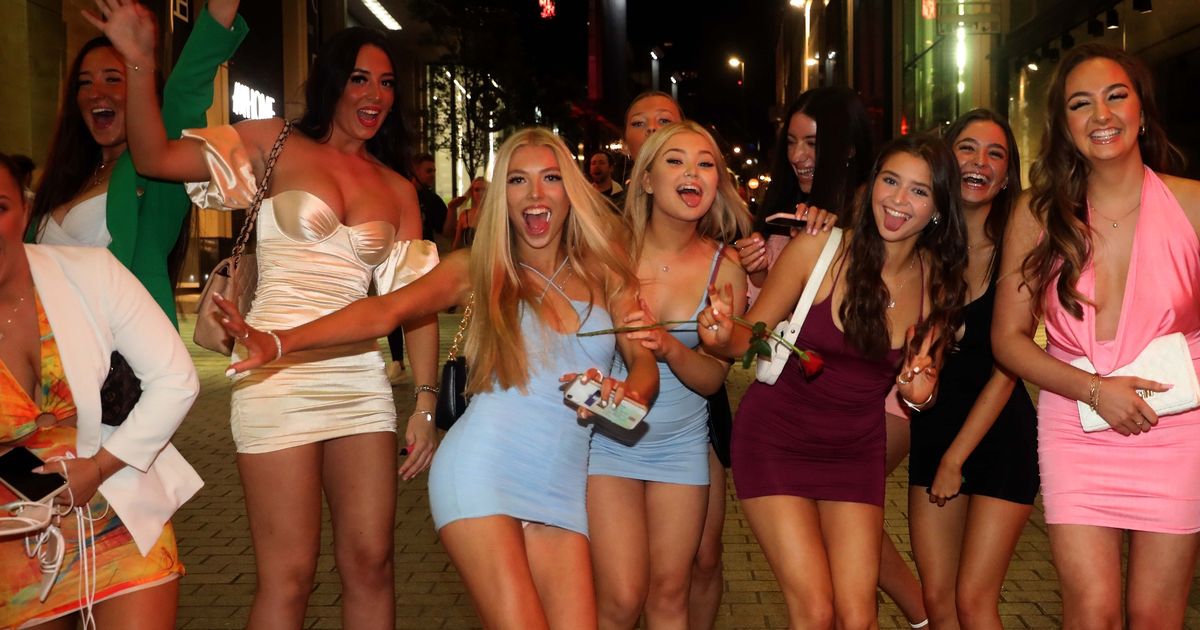 After a week of non-stop boozing and partying, thousands of students flocked to packed pubs and clubs on Saturday for the final night of Freshers week.

Drunken mobs of young Brits poured into bars, pubs and clubs before filing out on the street where the party didn't stop.

Students dressed in their glad rags cut loose in their last official night of 'freedom' before their studies begin at their chosen Universities.

Photos from Leeds showed ecstatic looking young men dressed in schoolgirl outfits as they celebrated the end of what would have been an extremely fun week.

Boozy lads were spotted having fun in between their pub crawl, with one lad setting himself up in a trolley.

Many young women had dressed up more smartly, hitting the high street in dresses and heels.

This batch of first-year students are a stark contrast to last year's unlucky lot, who were unable to enjoy a night out due to Covid restrictions forcing hospitality to close.

But lack of places to go and celebrate is no longer a problem and it's clear students have been making the most of it.

One young student was snapped having fun showing off her limbo skills.

Passers-by then watched in awe as she threw herself into a handstand.

Professor Stephen Powis, national medical director of NHS England, called on freshers to get the vaccine at pop-up clinics and walk-in centres set up by universities before their courses begin, the Mirror reports.

Many universities, including Liverpool Hope University, Birmingham City University and Queen Mary University in London, are setting up pop-up clinics to give out as many jabs as possible.

The plea comes as thousands of students are arriving at university campuses across the UK over the next few weeks.

Elsewhere, it has been reported that just four out of 27 top UK universities will return to full in-person teaching this term.

The Times reports that the universities of Sheffield, Southampton, Sussex and York expect to return to in-person studies, where its students will be expected to be on campus from the start of the academic year.