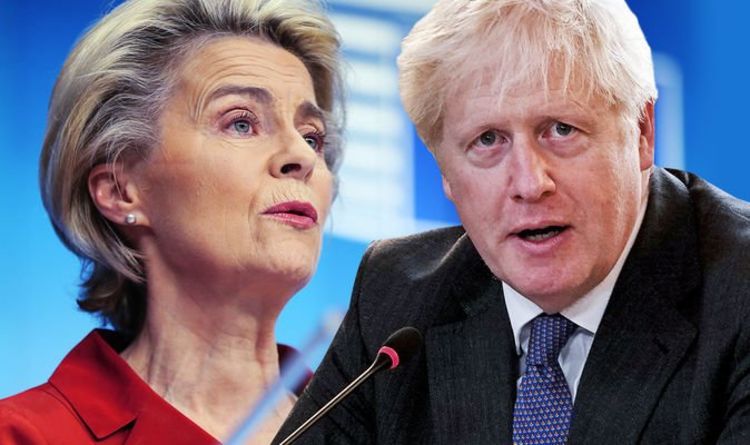 And Matt Vickers, who won the Red Wall seat of Stockton South in 2019, has told the EU until it acknowledges the truth about the Northern Ireland Protocol, true progress will be impossible, stressing: “It’s time to get moving.” Mr Vickers was speaking after European Commissioner Maros Sefcovic, the bloc’s Brexit point man, unveiled several key concessions during a press conference in Brussels including an 80 percent reduction in checks and regulations on all retail goods travelling into Northern Ireland.

However, Mr Sefcovic also dismissed opposite number Lord David Frost’s demand that the bloc removes the role of the European Court of Justice when it comes to the Protocol, in accordance with which Northern Ireland effectively remains in the EU’s single market for goods.

Mr Vickers told Express.co.uk: “Whilst it is right that we had to find a way in which peace on our islands could be preserved and a hard border avoided, we can’t be under any illusion that the Protocol was originally signed on the basis it would be operated in good faith.

“It is clear the Protocol in its current capacity is not working for the people on the ground.

“As such, it is right that Lord Frost and this government seek to renegotiate the terms, with this good faith in mind, so that all composite parties can mutually benefit.”

Mr Vickers applauded the fact that the UK was now seeing “real and substantive developments” in negotiations on the subject.

He explained: “Finally we have a robust and proper discussion with keen desires to see change implemented.

“It’s good to see the EU offering reforms in good faith instead of their usual headline-grabbing, anti-British quip, but they do not go far enough.”

Mr Vickers stressed: “The EU still fails to understand why people voted to leave back in 2016.

“The jurisdiction of the ECJ over the Protocol is a red line. British citizens rightly rejected the concept of having foreign judges presiding over our laws, having this imposed on British territory is not good enough.”

The removal of the ECJ in favour of an independent international arbitrator was more than fair and honoured the referendum result, he claimed.

Mr Vickers added: “It is time to get moving. We can make this work and get back to a decent working relationship with our friends in the EU.

“A reformed Protocol represents the future of a vibrant, energetic and successful working agreement between the UK and the EU.”

During the course of his remarks, Mr Sefcovic insisted the role of the European Court of Justice (ECJ) was mentioned to him just once during all of his discussions and interactions with people in Northern Ireland over post-Brexit arrangements.

He said: “Referring to my visit to Northern Ireland, it left me with very lasting impressions and I really met a lot of stakeholders and I saw big positive excitement about the opportunities dual market access represents.

“Many of the proposals we are putting on the table were indeed inspired by one of the first meetings I had in Northern Ireland with the Business Brexit Working Group.”

“I can tell you that in all the meetings I had, and I had quite a few interactions, exchanges and discussions, the issue of the European Court of Justice was mentioned once.

“When I first heard about this issue it was probably in the Command Paper which was published by the UK Government just before the summer break.”