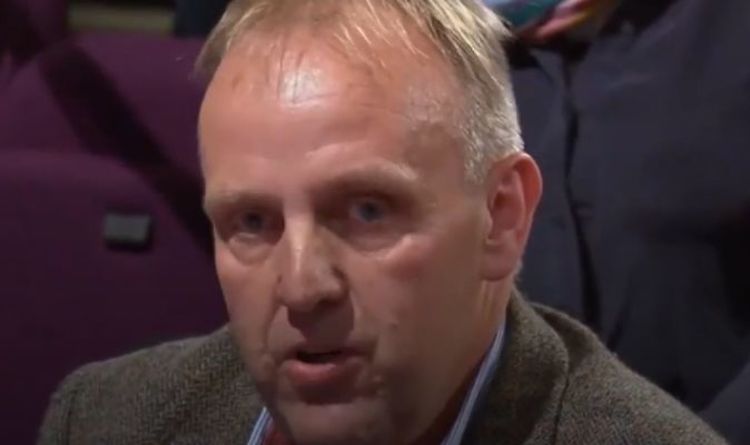 BBC Debate Night heard from an audience member that the Brexit debate is “back wide open” following the threat of reopening the Northern Ireland protocol by Lord Frost. The man told the BBC programme on Wednesday night that Lord Frost and the UK Government had gone to “war” with the EU over the protocol. It comes after the EU Commission appeared to back down over the Brexit protocol and agreed in principle to slash a large number of customs red tape.

“Lord Frost and the UK Government are going to war with Europe today.

“The facts have changed and the facts are evident we have massive issues with labour shortages in rural communities.

“Many of us would have seen neighbours and people who lived among our communities move back to Europe through Covid and the rest of it.

He continued: “If get Brexit done was just purely a slogan if Dominic Cummings and Boris Johnson etcetera went won an election on the back of a lie then surely if you are going to open the Brexit negotiations face facts and let people move and get free movement of people back in place to fill some of these key roles.”

It comes as European Commission vice president Maros Sefcovic announced the European Union is willing to drop “more than 80 percent” of the checks currently required to ship dairy and meat products to Northern Ireland from the UK.

The move marks a major concession from the EU Commission on the Brexit protocol and would see the vast majority of restrictions on the flow of animal goods in and out of Northern Ireland lifted.

Mr Sefcovic told a press conference in Brussels that the EU had agreed to an “80 percent reduction of checks and controls required” for diary and meat goods for sale in Northern Ireland.

He said: “Let me illustrate what this means, imagine you are a Northern Ireland business importing products of animal origin like yogurts, cheese, or chickens from Great Britain.

“More than 80 percent of the identity and physical checks previously required will now be removed.

“This will significantly use the process for bringing food supplies from Great Britain to Northern Ireland.”

He continued: “Similarly a lorry transporting different food products like dairy, meat, fish, fruit, and vegetables from Great Britain to supermarkets in Northern Ireland will now just need one certificate stating all goods of different types, class or description meet the requirement of EU legislation.”

However, Mr Sefcovic refused to budge over the role of the European Court of Justice as the final arbiter in alleged breaches of the protocol.

Mr Sefcovic told the press conference he want to stay on a “positive note,” when pressed on the issue by a reporter.

“That is something that would bring enormous pluses for the Northern Ireland economy. It is very clear that you cannot have access to the single market without the supervision of the European Court of Justice.”