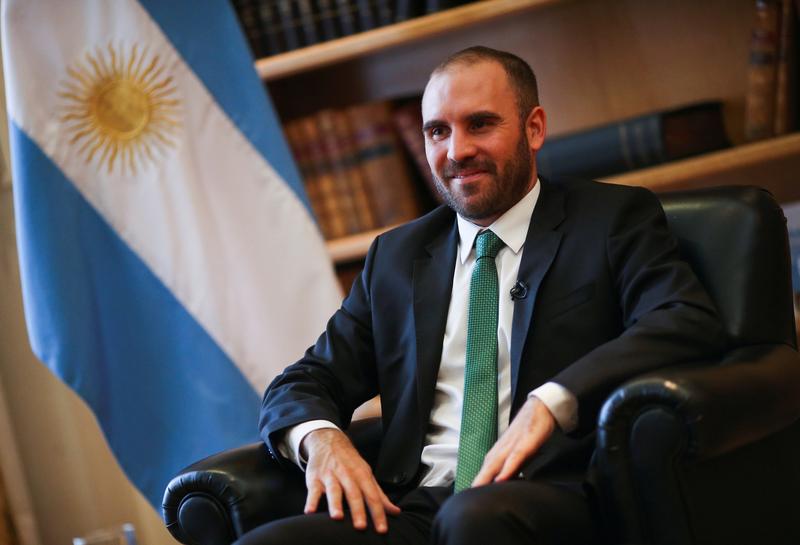 NEW YORK (Reuters) -Argentine senior officials met with private investors in New York on Friday, touting a much sought-after economic “roadmap” for the embattled country and playing up the chances of a positive deal with the International Monetary Fund.

The meeting, which also touched on Argentine politics, was attended by Economy Minister Martin Guzman and Cabinet Chief Juan Manzur and came after a meeting with the IMF to discuss a new deal to revamp some $45 billion in payments.

“A positive agreement with the IMF is a national priority,” Manzur said, according to a statement from Argentina’s government after the meeting. It said Manzur had underscored Argentina’s willingness to honor the debt.

Guzman gave what the government called a “roadmap” on Argentina’s economic outlook, saying the state needed to take a leading role in driving an economic rebound after the COVID-19 pandemic, investing in key sectors to boost growth.

“We need to strengthen the state,” he said, adding that the country being over-reliant on debt and monetary issuance created problems for the economy, and “so for this reason we consider it important that the deficit gradually decreases.”

“I don’t think they changed anyone’s view, but not for a lack of trying,” said an attending investor who wanted to remain unnamed due to the confidential nature of the conversation.

The source, who said the presentation was good and both Guzman and Manzur answered consistently throughout, said there is a lot of structural uncertainty in Argentina.

“Countries in general tend to be a little more consistent in terms of policies, even when they switch parties there are certain things that you do not change. Argentina has been very haphazard policy-wise for quite some time.”

Investors, stung by inflation, debt and currency crises in the country in recent years, have long complained of a lack of a clear economic plan. The country defaulted on private foreign debt last year before a major debt restructuring.

The meeting came days after Guzman met with IMF head Kristalina Georgieva, and the two agreed to continue working on developing a credible loan program.

Argentina and the IMF have for months been negotiating a program to replace one struck in 2018 that failed and left the South American country as the largest Fund borrower with a debt close to $45 billion. Argentina pledged to have a new deal in place by the end of March at the latest.

Last year Argentina restructured some $65 billion in debt with private international creditors, but the restructured bonds are trading at distressed levels as investors worry about the soy exporter’s economic outlook.

Argentine dollar bond prices were little changed on Friday, trading between 32 and 39 cents on the dollar across the curve.

Argentina’s peso currency has devalued some 15% this year amid strict capital controls that hold the official rate in check, though these controls have created a wide gap with prices in popular alternative exchange markets.

The South American country is also struggling with high inflation running above 52% annually.