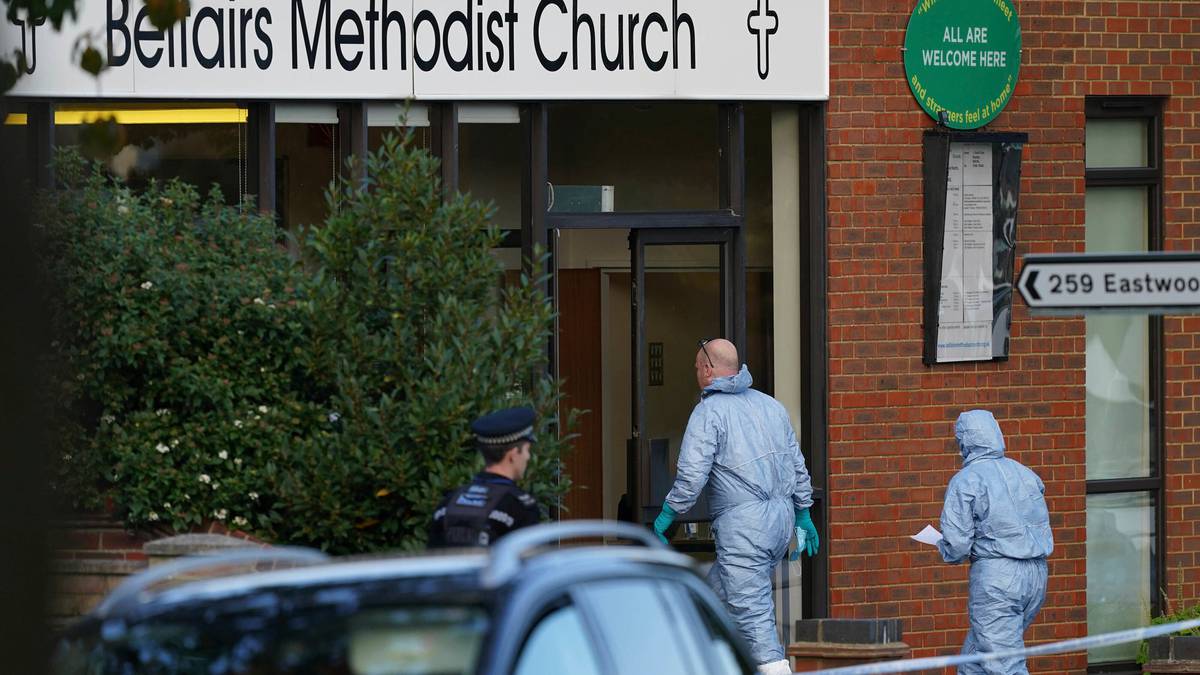 The Home Secretary has ordered an urgent review of MPs’ security after Sir David Amess, one of the country’s most respected parliamentarians, was stabbed to death as he met constituents at his Friday surgery in Leigh-on-Sea in Essex.

A 25-year-old British national believed to be of Somali heritage, who had allegedly been lying in wait for the MP, was on Friday night being questioned on suspicion of murder after being arrested at the scene.

Counter-terror police are leading the investigation, and detectives said they were maintaining an “open mind” about the motive for the attack.

The Telegraph understands that Essex Police have asked permission to access Amess’ parliamentary casework as part of the investigation to see whether anything he had been working on might explain the tragedy.

Investigators are also looking to establish whether the attacker had any links with Islamist groups or any record of mental illness.

Prime Minister Boris Johnson led the tributes to Amess, describing him as one of the “kindest, nicest, most gentle people in politics” and saying he and his Cabinet had been left “heart-stricken” by the attack.

Amess, who was married with four daughters and a son, is the fourth MP to be attacked recently while attending to constituency duties. His death comes five years after Jo Cox, the Labour MP for Batley and Spen, was murdered by a right-wing extremist.

Hours after he was killed, Priti Patel chaired a meeting with police chiefs and the security and intelligence agencies to discuss the attack.

She said she was “devastated” by Amess’ death, describing him as a “kind and loyal friend” and saying: “That he was killed while going about his constituency duties is heartbreaking beyond words. It represents a senseless attack on democracy itself.”

The Home Secretary asked all police forces to review security arrangements for MPs with immediate effect. The review will look at Operation Bridger, launched in 2016 to provide security and advice to MPs after a number of threats were made after parliamentary debates on Syria.

It leaves open the prospect that MPs could be provided with police guards whenever they meet their constituents.

Sir Lindsay Hoyle, the Commons Speaker, cautioned against any “kneejerk reaction” and said it was vital for democracy that MPs were still able to meet their constituents.

Despite the shock and grief across Westminster, the Father of the House – longest-serving sitting MP – Sir Peter Bottomley said MPs would want to continue to meet their constituents in person.

“I predict that all over the country this weekend, next weekend and in the months to come, MPs will hold advice sessions. That is what we do. When there is a challenge, we have to face it,” he said.

Amess had published the details of the constituency surgery at a church on his Twitter profile, with the full address and a picture of the building. The tweet, which was pinned to the top of his profile, had received more than 750 likes and 500 retweets on Friday night.

The Conservatives, Labour and the SNP confirmed they would be suspending all political campaigning out of respect for Amess. Government sources also said the schedule for Parliament returning from recess on Wednesday was now likely to be cleared in order for MPs to pay tribute.

He had been attending his regular Friday constituency surgery between 10am and 1pm at the Belfairs Methodist Church when the attack took place. It is understood the attacker had been waiting inside and stabbed him multiple times just before midday.

A member of Sir David’s team fled outside and immediately dialled 999, telling the emergency services: “Someone has been stabbed. Please get here soon. He is not breathing.”

Paramedics and armed police arrived within minutes and sealed off the area. While surgeons began trying to save Amess’ life, the attacker was arrested and handcuffed by armed officers.

An eyewitness described him as appearing calm and compliant as he was led away. It is understood he was not shouting any Islamist slogans during the incident, and it was thought the attack came without warning.

Amess, who was first elected to the House of Commons in 1983, was hugely respected by his colleagues. Tributes from all sides of the political spectrum were pouring in on Friday night.

David Cameron, the former prime minister, said: “David Amess was a kind and thoroughly decent man, and he was the most committed MP you could ever hope to meet.”

Sir Keir Starmer, the Labour leader, said: “This is a dark and shocking day. The whole country will feel it acutely, perhaps the more so because we have, heartbreakingly, been here before. Above all else, today I am thinking of David, of the dedicated public servant that he was and of the depth of positive impact he had for the people he represented.”

Brendan Cox, the widower of Jo Cox, said: “Attacking our elected representatives is an attack on democracy itself. There is no excuse, no justification. It is as cowardly as it gets.”

Justin Welby, the Archbishop of Canterbury, said: “The murder of an MP, in the course of caring for their constituents, is a deep blow to this country, its citizens and everyone who desires a peaceful and flourishing democracy.”

Nadine Dorries, the Culture Secretary, said: “He was the greatest amongst all in Westminster, there only to serve his beloved constituency.”

Tony Blair, the former Labour prime minister said: “Though on opposite political sides, I always found him a courteous, decent and thoroughly likeable colleague who was respected across the House.”

The Duke and Duchess of Cambridge wrote on Twitter: “We are shocked and saddened by the murder of Sir David Amess, who dedicated 40 years of his life to serving his community. Our thoughts and prayers are with his family, friends and colleagues.”

On Friday night, Essex Police continued to appeal for anyone who might have been in the area at the time of the attack to come forward.

Ben-Julian Harrington, the Chief Constable, said: “Here at Essex Police, officers right across our force and particularly in Southend have enjoyed a longstanding and positive working relationship with Sir David. Today’s events will be hard to take for everyone who knew him. Specially trained family liaison officers are providing support to his family today.

“Our officers will continue to work around the clock to ensure justice is delivered for Sir David and his family. I’d like to thank the people of Southend for their understanding as the investigation continues.”

Roger Hirst, the Essex Police fire and crime commissioner, urged anyone with information about the Amess’ killing to contact police.

“This is a shocking and utterly despicable attack against somebody who was an outstanding MP and has worked tirelessly for their community for many, many years,” he said in a statement outside Southend police station. “I know from personal experience the passion with which he stood up for and represented this community. He had a big heart.

“It is vital that we give the police all our support to ensure that they can do their job at this time. For anybody who has information, please do not hesitate to contact the police.”

Amess’ main interests and areas of expertise were animal welfare and pro-life issues. A devout Catholic, he was an anti-abortion activist and voted against gay rights. Local councillor John Lamb said he was “always trying to help people, and especially refugees”.

Amess married Julia Arnold in Westminster in 1983, and she worked for him as a part-time caseworker.

Their elder daughter, Katie Amess, 36, is an actress who in 2013 produced a film in support of gay rights, speaking out against her father’s opposition to gay marriage.

Their son, David Amess, 37, was jailed for four years in 2005 for wounding with intent to cause grievous bodily harm after hitting a man over the head with a champagne bottle in a club. A few months later, his sentence was reduced to three years on appeal but judges rejected claims that the conviction was “unsafe”.

Amess, along with the rest of his family, fought hard to clear his son’s name, claiming he had not received a fair trial, and vowed to continue to pursue justice following the appeal.

Their other daughters are Sarah Amess, 33, Alexandra Smith, 31, and Florence Braddy, 30, an athlete who lives in South Carolina.