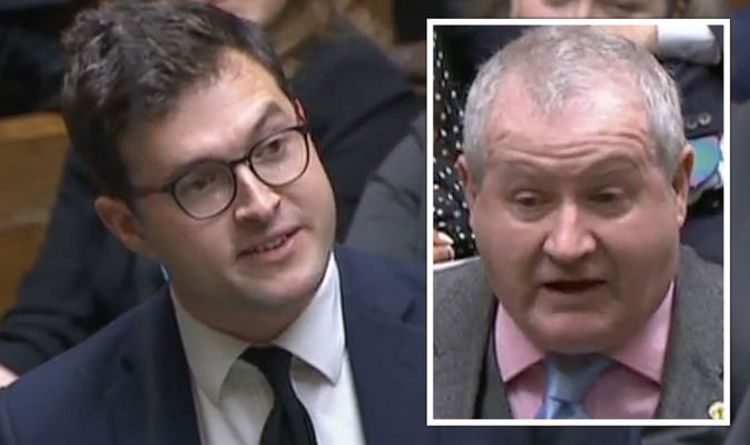 PMQs: Mangnall pokes fun at Blackford for losing his voice

Ian Blackford has been the focus of jokes from the Conservative Government benches after losing his voice while addressing Parliament during PMQ.  The SNP MP struggled through his questions to the Prime Minister with his voice audibly began to fail him. In response, Conservative MP Anthony Mangnall labelled the Scotsman the “new quiet man of British politics,” which triggered a chorus of laughter around the chamber.

Ian Blackford croaked as he demanded the Prime Minister “stand up and…save this valuable industry from being lost, overseas.”

He said: “It’s bad enough that this UK Government is holding back carbon capture in Scotland, but, across the board, they are proving an active barrier to renewable energy opportunities.

“Tidal stream energy has the potential to generate 20% of UK generation capacity, exactly the same as nuclear.

“All this industry needs is a ring-fenced budget of £71 million, a drop in the ocean compared to the £23 billion that this Government is throwing at the nuclear plants.

JUST IN: Flu vaccine warning: Efficiency ‘could fail to make 40%’

“So, at the very least Prime Minister, stand up and guarantee a ring-fenced budget for tidal stream energy and save this renewable industry from being lost overseas.”

When Mr Mangnall rose to address the House, the Tory MP made a point of poking fun and the SNP’s leader in Westminster.

He remarked: “It’s always a pleasure to follow the honourable gentleman and the new quiet man of British politics.”

The label “quiet man of politics” refers to the nickname given to former Conservative Party leader Iain Duncan-Smith.

“This is our best chance and very likely the last chance to confront the climate emergency faced by our planet.

“That is why it was such a devastating blow that on the eve of Cop26, this UK Government rejected the Scottish Clusters bid, to gain track-1 status for carbon capture storage.”

He added: “We know this decision was not made on technical and logical rules.

“This devastating decision was purely political. Scotland northeast was promised this investment in 2014.

“It is a promise that has been broken, time and time again.

“So will the Prime Minister finally live up to those promises or are they simply not worth the Tory election leaflets they are written on?”

Boris Johnson replied: “We remain absolutely committed to helping industrial clusters to decarbonise across the whole of the country and, of course, including Scotland, and I know that there was disappointment about the Acorn bid in in Aberdeen, and that’s why it has been selected as a reserve cluster.”