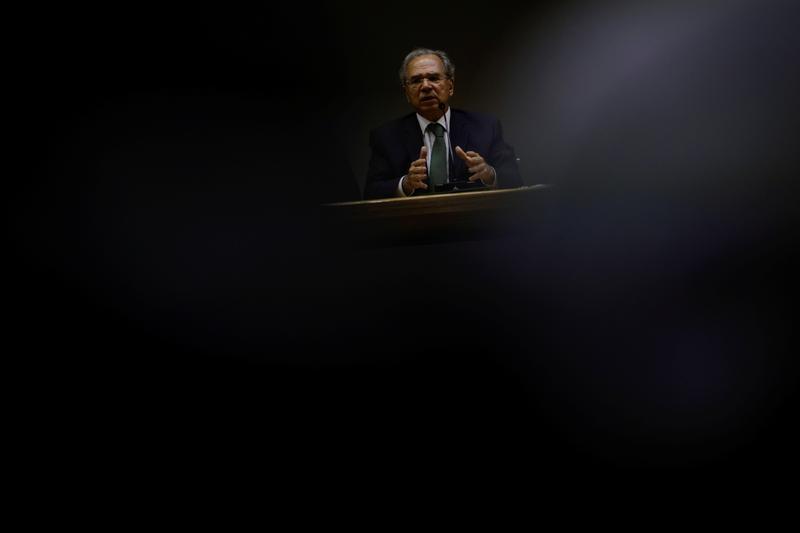 BRASILIA (Reuters) – Brazil’s currency and stocks pared losses on Friday as the economy minister dismissed rumors he would resign and tapped an ex-planning minister to replace a senior Treasury official who quit over plans to boost spending ahead of the 2022 election.

Guedes told journalists it was “natural” that Funchal had resigned given he disagreed with altering the constitutional spending cap to allow for increased spending on an expanded welfare program planned by far-right President Jair Bolsonaro.

Sitting next to Bolsonaro at a news conference, Guedes joked that he knew government allies were seeking names to replace him as economy minister, but he said he enjoyed the president’s full confidence.

Despite a budget tug-of-war with the government’s “political wing,” Guedes said at no point this week had he asked to quit.

The benchmark Bovespa stock index fell more than 4% before paring losses to less than 1% in afternoon trading. The real reversed losses of more than 1% to strengthen nearly 0.5% against the U.S. dollar.

Funchal was one of four senior Treasury officials who resigned on Thursday “for personal reasons,” according to the Economy Ministry.

Late on Thursday, Bolsonaro’s allies in Congress won a victory in a lower house committee for their plan to raise the constitutional spending limit and stagger the government’s court-ordered debts. That would make room for 84 billion reais ($14.7 billion) of extra spending next year, said the bill’s sponsor.

With his popularity declining ahead of the 2022 presidential election and a Senate inquiry calling for criminal charges over his handling of the coronavirus pandemic, Bolsonaro has vowed to more than double payouts from the country’s main welfare program to a monthly 400 reais.

On Thursday, Bolsonaro also promised one-off payments of 400 reais to some 750,000 truckers hit hard by the rising cost of diesel and threatening stoppages like one that left some gas stations in Minas Gerais state without fuel on Friday.

That proposal, which was not fully vetted by the economic policy team, had the four Treasury officials heading for the exits even before Congress moved to lift the spending cap, according to a person familiar with the matter.

The four officials have not made further comments on their reasons for resigning.

Fiscal risks have led several economists to forecast an even more aggressive interest rate hike by the central bank next week, after it raised rates by a full percentage point last month to fight double-digit inflation.