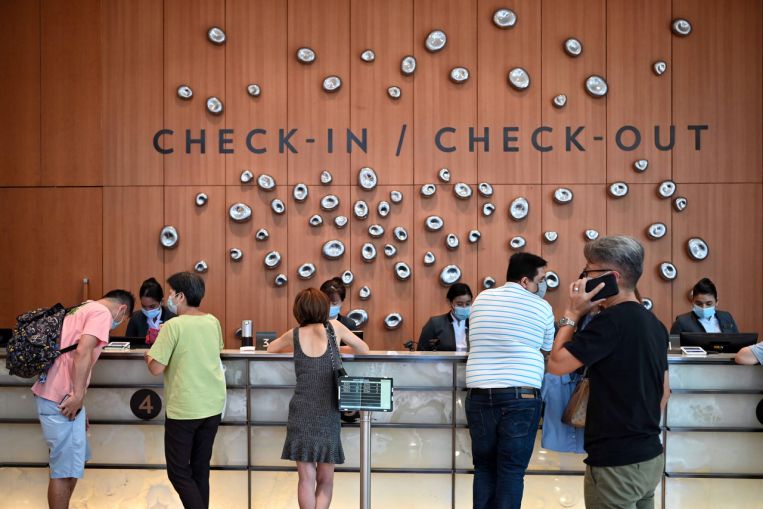 SINGAPORE (THE BUSINESS TIMES) – Hotel occupancies and revenue per available room (RevPAR) were at their highest all year last month, Singapore Tourism Board (STB) data showed.

The latest uptick took overall hotel industry room revenue to $79.1 million, up from $68.6 million in August.

Meanwhile, international arrivals rose by 19.7 per cent month on month to 19,000 travellers – led by mainland China, which sent 8,950 visitors last month, against 8,900 in August.

Travellers from Germany rose to 769 in September, from 139 the month prior, after the launch of a quarantine-free scheme for fully vaccinated arrivals from the European country on Sept 8. Singapore has since announced vaccinated travel lanes, or VTLs, with 13 countries in all.

The Republic also saw a month-on-month rise in arrivals from places that had been key source markets before the Covid-19 pandemic, such as Malaysia, Japan, India, Hong Kong, Indonesia and South Korea.

Average room rates increased month on month to $163.60 last month, from $147.90 previously, though this was still below the year’s peak of $167.30 in April. The monthly improvements were recorded across all hotel tiers: economy, mid-tier, upscale and luxury.

But industry metrics are still well short of their pre-pandemic levels. Occupancy was 87 per cent in September 2019, while RevPAR at the time was $205.07.

For the nine months, average occupancy in Singapore’s hotel sector was 49.9 per cent, compared with 57.1 per cent in the same period last year.

International arrivals were lower by 93.6 per cent year on year, at 172,060 travellers for the nine months – that paled against 14.33 million in the first three quarters of 2019, before the pandemic began.

The STB defines international visitors as people who spend less than a year in Singapore. It excludes returning citizens and permanent residents and pass holders, Malaysians arriving by land, non-resident air and sea crew, and air transit passengers.