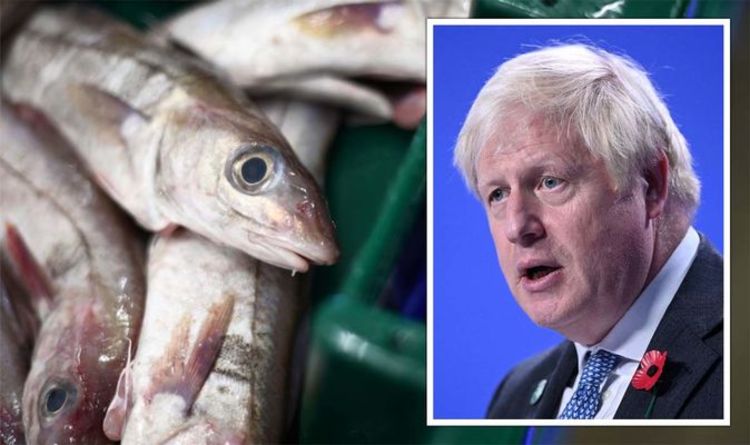 Jon Savage – who previously branded leaving the EU a “Tory-owned disaster” – tweeted his controversial views as the ongoing spat over fishing permits between France and the UK continues. Thrown into this mix, disagreements between the EU and Brexit Britain over the Northern Ireland Protocol has added another dimension to the UK’s new relationships with its continental neighbours.

Responding to a tweet sharing the article, the cultural historian wrote: “Like a heroin addict trying to recapture the rapture of the first hit – doomed never to repeat the high.”

The article gives a scathing analysis of the Prime Minister’s withdrawal agreement and claims that the UK is in an endless “purgatory” where it bashes the EU despite having left the club.

He wrote that “by far the most memorable thing (Mr) Johnson ever promised about Brexit is that he would get it done”.

He claimed that deliberately using the issue for his own political capital means “that legacy is diluted every time the issue foists itself into the news”.

In conclusion, he wrote that Mr Johnson’s Brexit deal “condemns Britain to re-enact forever the tedious, embittered process of leaving with no hope of satisfaction, because we have already left”.

His comments came as French President Emmanuel Macron sensationally backtracked on threats to punish the UK over the fishing permits dispute.

His Government had vowed to restrict cross-Channel trade, threatening to turn bickering over fish into a wider trade dispute between two of Europe’s biggest economies, if it was not resolved.

Mr Macron stepped back from the brink on Monday as Brexit Secretary Lord Frost said he hoped a scheduled meeting on Thursday could resolve the issue.

The news was warmly received by Downing Street.

A spokesman said: “We welcome the French government’s announcement that they will not go ahead implementing their proposed measures as planned tomorrow.

“The UK has set out its position clearly on these measures in recent days.

What do you think about Mr Savage’s comments? Click here and tell us below.

“As we have said consistently, we are ready to continue intensive discussion on fisheries, including considering any new evidence to support the remaining licence applications.

“We welcome France’s acknowledgement that in-depth discussions are needed to resolve the range of difficulties in the UK/EU relationship.

“Lord Frost has accepted Clement Beaune’s invitation and looks forward to the discussions in Paris on Thursday.”

A senior Government source told the Telegraph: “We’re glad that France has stepped back.

“We’ve stuck to our position and were ready to respond if they had brought forward these measures, which would have put the EU in breach of the TCA (Brexit withdrawal agreement).”