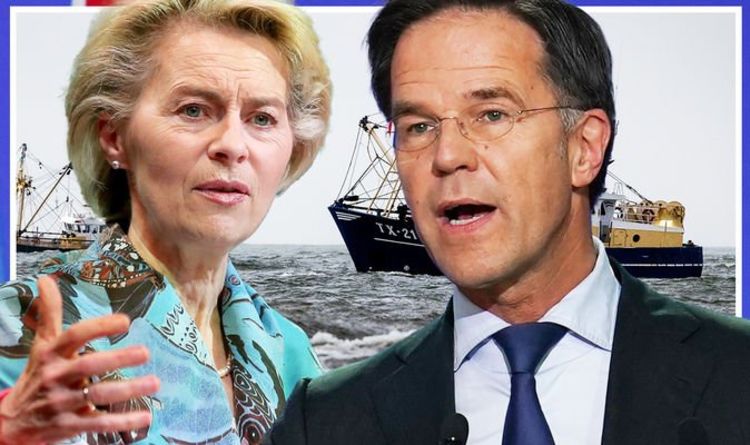 Brussels approved a €5.4billion emergency fund aimed at helping businesses tackle the short-term effects of Brexit back in June. The money is meant to cover extra costs and compensate post-Brexit losses.

Ireland is the biggest beneficiary of the funds, followed by the Netherlands, France, Germany and Belgium.

But Dutch fishermen are complaining they are yet to receive money under the scheme, whilst French fisheries have already received part of the sum.

Speaking to Express.co.uk, Durk van Tuinen of the Dutch Fishermen’s Union (Nederlandse Vissersbond) said 10 months after Brexit, fishermen in the Netherlands are struggling to prove the relation between their losses and Brexit, a strict requirement to receive the funds.

Blaming Brussels’ rules under the scheme, he said: “The EU Commission is stating that it is up to a member state to make to rules on how to get the money out of the funds for fishermen.

“So a member state is responsible for making the rules and also the possibilities.

“And the member state also needs to make clear that there is a Brexit relation with the spending of the money.

“I know the French have worked very quickly on this and have already paid fishermen out.

“But the Dutch government is taking more time as it’s more difficult in our situation to prove the relation between the funds and Brexit, which is essential if you want to use the money from the funds.”

Asked whether he believed the EU was making it difficult for Dutch fishermen to claim their funds, he said: “Yes. At this point, we are now in November, it’s already been 10 months after Brexit and fishermen have lost 10 months of income.

“It’s not through fault of our government if it’s very difficult to get the funds.

“The EU has made it impossible to prove the relation between Brexit and the funds and that takes time.”

With Brexit, EU fisheries faced a 25 percent reduction of their catch value from UK waters, according to the Commission.

Fishing rights have been at the heart of the Brexit negotiations and are still a point of contention between the UK and France.

The dispute erupted in September after Paris accused London of failing to allocate enough licences to French boats in the wake of Britain’s exit from the European Union, while London said it was respecting the deal.

“Happy to welcome in Paris David Frost to relaunch a necessary dialogue and ensure the implementation of our agreements,” Mr Beaune said on Twitter, posting a picture of the two shaking hands in front of the British, French and EU flags.

The talks ended after about two hours. The two sides did not immediately give details of what they discussed.

Mr Beaune also shook hands with Lord Frost on the front steps of the ministry, with both men smiling and chatting in front of TV cameras at the end of the discussions.

On Monday, French President Emmanuel Macron postponed trade sanctions he planned against Britain over the licensing dispute so that both sides could work on new proposals.

The measures threatened by France include increased border and sanitary checks on goods coming from Britain and banning British vessels from some French ports – steps that could potentially snarl cross-Channel trade.

Britain and France have argued for decades over access to the rich fishing grounds around their Channel coasts, an issue which also dogged years of Brexit negotiations before Britain completed its withdrawal at the end of 2020.

The latest dispute over the number of post-Brexit fishing licences saw France seize a British scallop dredger, which has since been released.

Reasserting British control over its fishing grounds was a central plank of the case for Brexit that Prime Minister Boris Johnson presented to British voters.